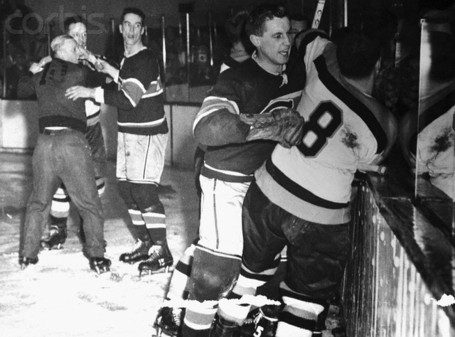 After the 1953 Cup win, and prior to string of five Cups from 1956 to 1960, the Canadiens remained a strong and contending club. In fact, were it not for a couple of mishaps, both minor and major, this team might just have made it eight Stanley Cups in a row. In Day 7 of the Eyes On A Dynasty, we take a look at just how close the Habs came in '54 and '55.

In the television era of hockey coverage, a Canadian team placed in the Stanley Cup finals every spring from 1952-53 to 1968-69, apart from 1961, when the Blackhawks defeated the Red Wings. In those sixteen finals, a Canadian team emerged victorious on fourteen occasions. With the montreal Canadiens winning ten Stanley Cups, the Maple Leafs claiming four in 1960's, and the spoils going to Detroit in 1954 and 1955, it truly was the golden era for hockey fans north of the 49th parallel.

The decade of the fifties kicked off in high style, with a budding Detroit dynasty ending Toronto's bid for a fourth straight Stanley Cup in 1950. In 1951, a classic Cup final ended on a Bill Barilko overtime goal, giving the maple Leafs their fourth win in five season. From there on, it would be the Montreal and Detroit show for the next few seasons.

The Red Wings were a powerhouse unforeseen, finishing first seven consecutive times from 1949 to 1955, a span in which they would win four Cups. After winning the 1952 Stanley Cup, Detroit were bumped off by Boston, who went on be defeated in five games by the Canadiens in the first televised Cup Final in 1953.

From there, the Canadiens would knock heads with the Red Wings on three successive occasions. Hockey viewers at the time may have sensed it - these two loaded squads were battling it out for the title of team of the decade.

When all was said and done, the Canadiens won out, not only by inscribbing their names on the Stanley Cup six times in eight seasons, but they also managed the incomparable feat of attaining ten straight Stanley Cup Finals - a record never likely to be remotely touched.

For Montreal and Detroit, everything played out from 1954 to 1956. What some Montreal fans may not realize, is just how close the Canadiens came to winning eight straight Cups for themselves. 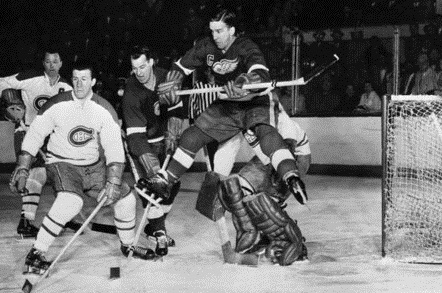 The Canadiens, defending Cup champions in 1954, had swept Boston on the strength of rookie goalie Jacques Plante's heroics, while the Red Wings dispatched the Leafs in five games. The Canadiens / Wings showdown began on April 4, with a 3-2 Detroit win. Montreal evened the series by the same score two nights later. In Montreal for Game Three, the Red Wings burst Plante's bubble, with a 5-2 win. A second Canadiens loss on Forum ice placed their backs against the wall and Detroit one win away from the Cup.

Montreal coach Dick Irvin then did the unthinkable, pulling Plante in favour of Gerry McNeil. The manoeuver seemed to spark the Canadiens, and they remained alive with a 1-0 shutout at the Detroit Olympia. In the sixth game in Montreal, the Habs looked to have turned the tide in knotting the series, as McNeil made 33 saves in a 4-1 win.

A seventh game showdown was set for Detroit on April 16. It would mark the final game of 1953 overtime Cup hero Elmer Lach's glorious career. Lach would retire following the series as the NHL's all-time leading point scorer.

The Canadiens took the lead midway in the first period on a goal by Floyd Curry. With Paul Masnick in the penalty box, Red Kelly tied the score 1:17 into the second. From there, goalies McNeil and Terry Sawchuk were impenetrable. The contest headed to overtime - a seventh game Stanley Cup Final rarity.

What happened next would leave its participants numb for years. A Red Wings forward named Tony Leswick, scorer of a whole six goals that season, skated a few strides inside the Montreal blueline. Called off on a line change, Leswick simply floated a puck toward the Canadien net, and turned to leave the ice. Canadiens defenseman Doug Harvey, an avid summertime ballplayer, attempted to catch the shoulder high flick shot in his glove, but instead the puck deflected off Harvey's thumb, finding its way past a startled McNeil. The Detroit Olympia crowd seemed momentarily stunned at what happened, taking a full second or two to explode in celebration.

The defending champion Canadiens were dethroned by the most remote of long shot oddities in Cup history. It would a long train ride back to Montreal in which very little was said. Coach Irvin broke the silence but once, noting that training camp was slated to begin in one hundred and fifty days.

The clip below features some duplicate footage of the series, along with members of the 1954 Wings and Habs reminiscing of the Cup final.

In 1955, the domino effect of events triggered by the Rocket Richard suspension played greatly into the circumstances of that year's regular season finish and Stanley Cup Final. Not only did Montreal lose the Rocket for the balance of the schedule, but the riot by fans at the Forum on the night of March 17 caused the game to be forfeited. The two points earned by Detroit in the incompleted game were the exact margin they needed to claim the regular season championship over the Canadiens.

As fate would have it, the two teams met again for all the marbles, Detroit owning home ice advantage in the seven game set. After six games, a clear homers series had emerged, with Detroit winning all games at the Olympia, outscoring Montreal by 16 goals to 4. On Forum ice, a similar tale, with the Habs netting 15 to the Red Wings 8. 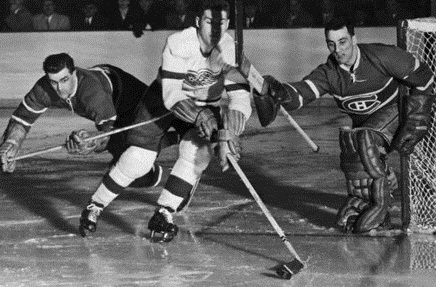 Many Canadiens players through the years have maintained that had the Rocket had been present to assist in the Habs cause that they would have won the series. Captain Butch Bouchard was one claiming as much, noting Richard's inspirational character when games were on the line often spurred the Canadiens on. Other Canadien players, such as Marcel Pronovost, have said that the Habs' players elevated their games in the Rocket's absence.

In the seventh and final match of 1955, the Canadiens put forth an effort that fell short. When Gordie Howe scored the Red Wings to make it 3-0 with 11 seconds left in the middle frame, the bell had all but tolled on the Canadiens season.

Rocket Richard, perhaps the greatest playoff performer the game has seen, would have made a clear difference, It's a fact that can never be debated, not one year after a player of Tony Leswick's calibre was the difference maker.

It would be a second straight heartbreak for Montreal, and a final one behind the Habs bench for coach Dick Irvin.