Hockey itself, and the Canadiens in particular, could not have hoped for a more eventful first season on television. From Jean Beliveau's successful three game trial, to Maurice the Rocket breaking the all-time goal scoring record to an exhilerating overtime Stanley Cup win, the 1952-53 season was a most memorable one for Canadiens fans. On Day 5 of the Eyes On A Dynasty series, we look back on that fateful season, where the seeds of the coming dynasty where firmly in place.

On November 8, 1952, Maurice Rocket Richard surpassed Nels Stewart as the all time leading goal scorer in NHL history with his 325th career goal with his sixth goal of the season against the Chicago Blackhawks at the Montreal Forum.

Richard's goal was anxiously anticipated, as he had equalled Stewart's mark on October 29 with a two goal performance against Toronto, where he received a standing ovation from Maple Leafs supporters. He had gone goaless for three games until firing a shot at Hawks netminder Al Rollins, which lay just outside the goal line, and was pushed across the red line in a scramble, nudged by the but end of the goaler's stick. 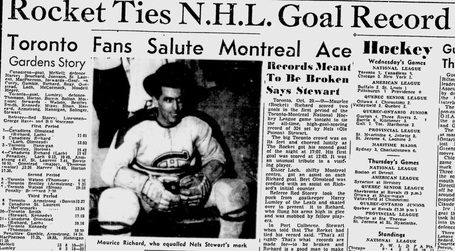 Midway through the second period, with the score tied at one, Richard took a pass from Doug Harvey and battled close to the goal. Spotting Lach open at the side, he fed a perfect pass onto "Elegant" Elmer's stick, which he slid into the open side. Only 30 second's later, a hard Richard backhander found its way past Rollins and the Forum crowd erupted, holding up the game while celebrations ensued.

Televised hockey couldn't have asked for better drama and suspense. The Hollywood scripts of yesteryear were no match for this!

The remainder of the clip shows Lach's overtime Cup winner against the Bruins on April 16. The translated commentary beginning at the 1:07 mark:

Translation of what is said during the clip is as follows:

Narrator: The famous 325th goal of the career of Maurice Richard was scored on November 8, 1952, exactly ten years to the day of his first NHL goal. Nels Stewart is on hand to congratulate him. 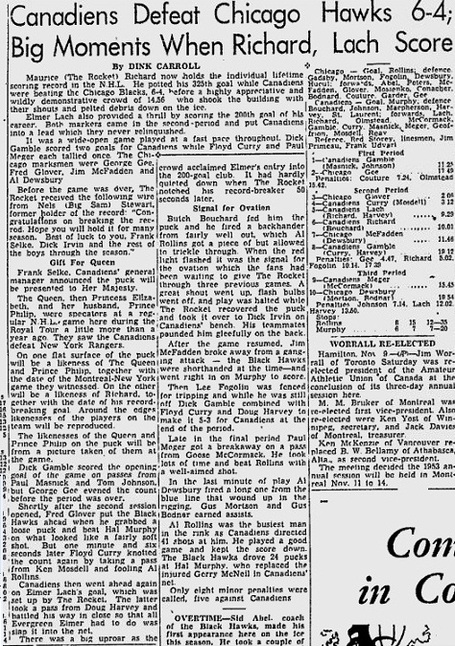 Narrator: Delerium reigns. On this April night of 1953, Elmer Lach, assisted by Maurice Richard, scored the goal that gave the Canadiens the Stanley Cup.

Lecavalier: The players are raising him triumphantly, and he deserves it.....Elmer Lach! The Canadiens win the Stanley Cup for the first time since 1946, seven years. This is an unbelievable scene!

House Announcer: Canadiens goal scored by Lach....on a pass by Richard! Time of the goal, 1:22.

Lecavalier: One minute and twenty-two, the official time of this incomparable goal.

Maurice's enthusiam is so great, that he breaks his teammates nose when he jumps into his arms. They were in overtime, in the last game of the playoffs against Boston.

Richard and Lach, are overjoyed....Richard isn't usually this emotional, but he's just letting himself go now.

The Stanley Cup, they're carrying it out to center ice now. Let's pass things over to Michel Normandin.

Normandin: We're trying to clear a path now and make our way to Maurice Richard. Richard, who fed the puck to Lach on the Cup winning goal. Maurice....

Richard: Merci Michel, I got to tell you that the first time in all my days playing hockey that I celebrated like that!

Normandin: Now above all else, you've won the Stanley Cup....

Richard: Yes, and it's a game I'll never forget!

Normandin:....well thanks for your effort and congratulations. 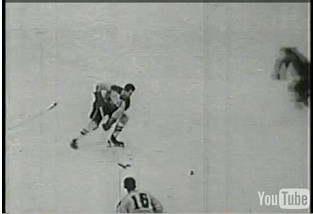 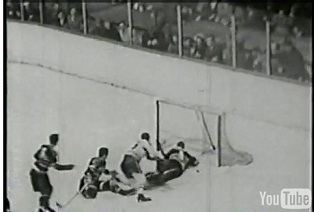 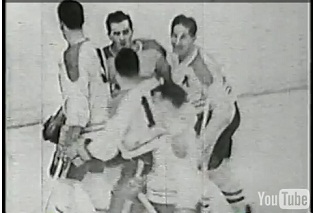 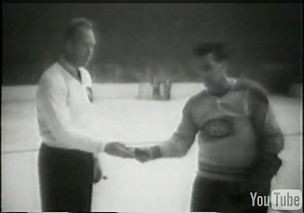 Stewart may not have been in attendance for the record breaker, as the Gazette notes:

Before the game was over, The Rocket received the following wire from Nels (Big Sam) Stewart, former holder of the recod: "Congratulations on breaking the record. Hope you will hold it for many season. Best of luck to you, Frank Selke, Dick Irvin and the rest of the boys through the season."

Pretty cool that after the official hands him the puck, the Rocket expresses his emotions throwing the puck down on the ice, then picking it up, before handing it to the coach Dick Irvin.

The game on the 8th had several undercurrents. Goalie Gerry McNeil had been injured in Toronto, the same game in which Rocket tied Stewart, and had been replaced for the past three contests by rookie Jacques Plante, who had been called up on a three game trial from the Montreal Royals. By NHL rules, if Plante played a fourth game, he would have to be signed to a professional contract. Plante had done extremely well, with two wins and tie in that stint, and there was some question that he would be signed. GM Frank Selke's other option included calling up Plante's backup with the Royals, Hal Murphy, who had seen less action in the QMHL that Plante had with the Habs. 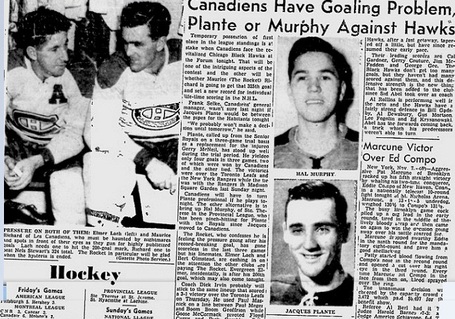 Ultimately, with McNeil close to a return, Selke chose to go with the 25 year old Murphy, who by circumstance would play his lone NHL contest on a very eventful night. For Murphy, it would be his third game in four nights, in three different leagues (St. Therese, QPHL, the Royals and the Canadiens), and with the win over Chicago would always joke that he left the NHL undefeated.

In addition to the Rocket targeting his landmark goal, Elmer Lach, the NHL's all-time points leader at the time was one goal shy of his 200th career marker. But for fans with tickets to that night Forum game, all that was on their minds was the suspense building Rocket goal, and when it would finally come. 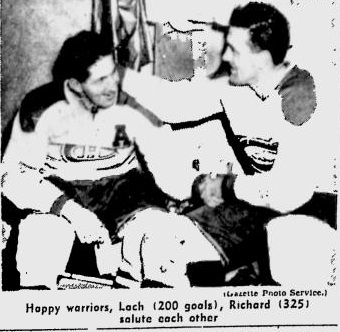 The Detroit Red Wings with 90 points, finish first in the regular season, 15 points ahead of second place Montreal. The Bruins and Blackhawks, both one game over .500 take up the final two spots. Chicago gives Montreal all kinds of trouble in the semi-finals, while the Bruins cause a major upset by defeating the defending champs in six games.

Chicago's Gerry Couture opens the scoring in Game One, but Boom Boom Geoffrion ties the game only 1:21 later, Butch Bouchard and Pul Meger add third period goals. The Habs outshoot the Blackhawks 37-25. Gerry McNeil is in goal for the Canadiens, while Al Rollins stands on his head for Chicago. Game Two sees the Hawks' Jim McFadden opens the scoring with his first of two first period goals as Chicago builds a 3-1 lead after one. In the second, Dickie Moore, Geoffrion and Dick Gamble rally with three goals in five and a half minutes to give Montreal the lead. Montreal outshoots Chicago 43-30. Geoffrion scores the Game Three's first marker midway into the second and the 1-0 score holds up until late in the game. With a little less than two minutes left, Bill Mosienko ties it up, sending the game into overtime. Five minutes in, Al Dewsbury gives Chicago their first win of the series. Montreal is outshot 26-25. A Bert Olmstead PP goal puts the Habs up midway through one period in Game Four, but Mosienko evens the score early in the second. Vic Lynn puts Chicago up with less than eight minutes to go. McFadden scores into an empty net. Shots are 27-26 in Chicago's favour. The first goal of the game has meant little so far in the series, as each team scoring first has gone on to lose. A Game 5 first period barrage by he Blackhawks catches the Canadiens flat footed. Montreal is outshot 20-9 in the frame and Chicago leads on goals by Fred Hucul, Mosienko and Gus Bodnar. Maurice Richard and Gus Mortson trade second period goals and Tom Johnson scores late in the game to make it look close. Chicago fires 37 shots at a shaky Gerry McNeil, who will be replaced by rookie Jacques Plante for Game Six.

Facing elimination in Game Six, coach Dick Irvin makes the gutsy choice of starting rookie Plante to attempt to thwart the surging Blackhawks in Chicago. The coach also chooses to sit all of Dick Gamble, Paul Meger and Paul Masnick in favour of Eddie Mazur, Lorne Davis and Calum McKay. Before the game, Irvin tells the nervous rookie that he's going in and that he'll get a shutout as well. The Habs hold up their end of the bargain, limiting Chicago to 23 shots, as Geoffrion, the Rocket and Ken Mosdell count for Montreal in a 3-0 win that evens the series. It's winner take all on Forum ice for Game 7 and Geoffrion gets things rolling with his fifth series goal 1:38 into the first period. Chicago's Mosienko answers late in the middle frame, but Habs unsung hero Mazur gives the Canadiens the lead one minute later. Richard and Mazur again seal the deal in the third to give the Canadiens the victory. Montreal outshoot Chicago by a 45-34 margin.

The Canadiens had a miserable time against Boston during the 1952-53 regular season, winning only 3 of 14 games and only claiming victory once on Boston ice. Montreal were far from favoured in the Final, even with home ice advantage. Coach Irvin decides to continue with rookie Plante in goal and a similar pattern emerges in Game One, as the Bruins' Bob Armstrong opens the scoring two minutes into the first period. Moore evens the score before the period is out, and Mosdell and Curry help the Habs take control with goals in the middle frame. Halfway through period three, Johnny Peirson brings the Bruins within one, but the Rocket charges back just over a minute, scoring one of his ever-timely playoff markers to seal a 4-2 Montreal win. The Canadiens pepper Boston goalie Sugar Jim Henry with 41 shots, while Plante faces only 22. Plante surrenders another early goal in Game Two, as Leo Labine and Ed Sanfdord pace Boston to a 2-0 lead. Jim Henry is knocked out of the game late in the first, and is replaced by the similarly named Gord Henry. In the second, Olmstead replies for Montreal, before Sandford marks again for the Bruins. A third period goal by Milt Schmidt makes it a 4-2 game.

Irvin decides to go back with McNeil in goal for the crucial first game in Boston. His choice proves to be a fruitful one, as the Canadiens respond by shuting the Bruins out in the Garden by a 3-0 score, while limiting their adversaries to 18 shots. Johnson, Mosdell and Paul Masnick manage to beat Gord Henry, who sees 34 Montreal shots come his way. The Canadiens are clearly the more confident team starting Game 4. A goal by Davis three minutes starts things off well for Montreal, who add goals from Richard and Moore before the period is up. After Dave Creighton scores for Boston, Geoffrion makes it a 4-1 game by the end of the second. Richard adds a second marker early in the third, but goal by Schmidt and Jack McIntyre make the game close. With a little less than three minutes to go, the Bruins pull Henry for an extra attacker and the Habs' McKay pots an empty netter. Richard, with a minute and a half to go, beats Henry to complete the hat trick. 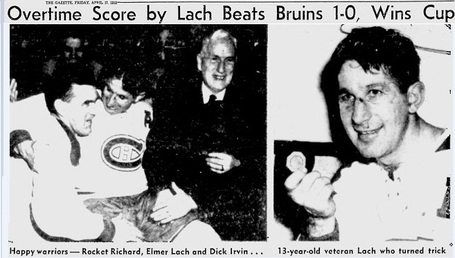 Sugar Jim Henry returns for Boston in Game 5 at the Forum and the move settles the Bruins collapsing defense. Through 60 minutes, Henry is unbeatable, turning away 24 Canadiens shot. McNeil at the opposite end is equal to the task, stopping all 20 Boston shots he faces. The game heads to overtime but the extra period is a brief one, as Elmer Lach intercepts a Bruins clearing pass and fires the game winner past a screened and stunned Henry, giving the Canadiens their seventh Stanley Cup. 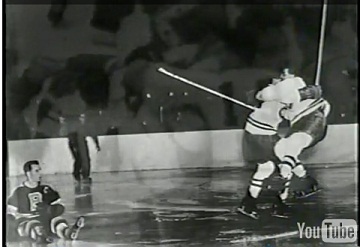 Here are the complete five game highlights from the 1953 final. 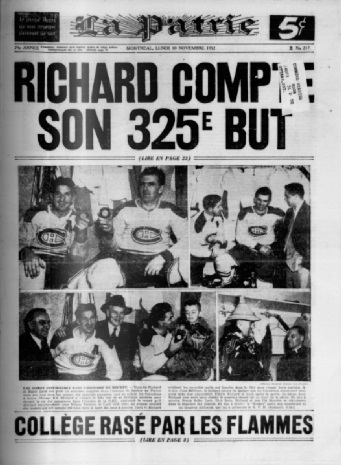 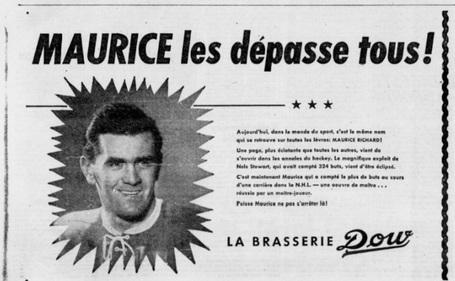