Jaroslav Halak Blues' Mask Evokes the Spirit of Jake the Snake, While Player Agent Epitomizes Snake Behind the Scenes

Share All sharing options for: Jaroslav Halak Blues' Mask Evokes the Spirit of Jake the Snake, While Player Agent Epitomizes Snake Behind the Scenes

Last January 20th, as the Canadiens prepared to host the St. Louis Blues, I posted an article entitled "Many Years Ago, The Canadiens Helped Legitimize The Blues."

In that piece, I listed every player who ever donned both the CH and the St. Louis Blues' bluenote, going all the way back to the 1967 expansion. The point of the article at that time, was to show the Canadiens influence on a Blues team that reached the Stanley Cup Final three years in succession from 1968 to 1970.

The payback was a dilly back in the day. Their fired coach in the summer of 1971, Scotty Bowman, guided the 1970's Habs to five Stanley Cups in the next eight seasons.

Guess they're not called the Blues for nothing!

In hindsight, maybe we owed St.Louis a good shake or two!

At the time of that article, I noted that 70 players had shared both jerseys, and among them were goalies Jacques Plante, Ernie Wakely, Phil Myre, Michel Larocque, Michel Plasse, Vincent Riendeau, and Rick Wamsley.

Thus, with the trade this past summer, Jaroslav Halak will become the eighth goalie to wear the colours of both the Habs and Blues, and soon, he and Lars Eller will bring the shared jersey total count to 72.

I bring this all up thanks to a timely Fanshot from EOTP reader Paperwork Ninja, who keenly noted a posting at St. Louis Gametime, of Jaroslav Halak's new Blues' mask, which pays tribute to the lone Hall of Fame goaler to wear both the Habs and Blues colours.

Plante, oddly enough, is one of two goaltenders in Canadiens history, who were enshrined in the Hockey Hall of Fame, who managed to reach the Stanley Cup finals with a team other than the Habs.

Canadiens goalies in the HHOF include Georges Vezina, George Hainsworth, Bill Durnan, Plante, Gump Worsley, Ken Dryden and Patrick Roy - who equalled his Habs' success with Colorado in 1996 and 2001.

As far as I know, Jaro doesn't knit his own underwear like Plante did, he never wore a toque as a junior, and has no asthma symptoms or issues with getting hit in the face with pucks. He also didn't win six Stanley Cups before Montreal ditched him. 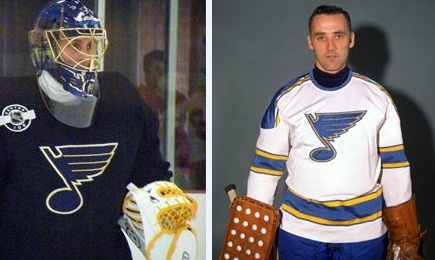 Call me a cynic, but after last weeks Halak autograph session in Montreal, this newest mask design seems like a final jab at the Canadiens by Halak's agent Allan Walsh.

Really, if Halak, via his agent were intent on evoking great Blues goaltenders, they had a pick between Grant Fuhr, Glenn Hall, Curtis Joseph, Mike Liut or John Davidson, the former goalie and current Blues GM who traded for him.

Slim pickings. I wanna rock - where's my one string guitar!

Nonetheless, as per the agent, I smell a rat. 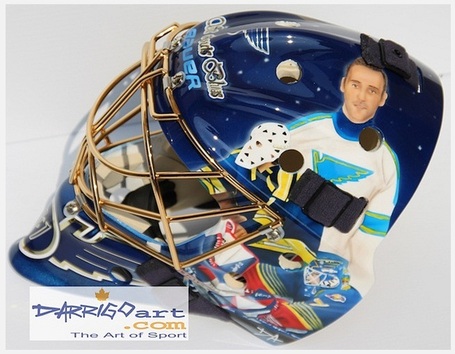 Canadiens goalies in recent years have paid tribute to the legendary men who have played goal for Montreal, such as Jocelyn Thibault portraying the Jacques Plante pretzel mask on his ownfacial shield, and Carey Price invoking images of greats such as Georges Vezina, George Hainsworth, Bill Durnan, Plante, Ken Dryden and Patrick Roy.

Maybe on Alex Auld's mask we'll see the famous Dryden pose or the image of Plante slipping the mask over his bloodied face for the first time ever in 1959.

Perhaps in a year's time, Price will be dealt to Colorado, and his mask could have the image of Roy giving coach Mario Tremblay the infamous glare.

Only if he brought on Walsh as his agent.

This, could never end!

Fans pissed at the Halak trade, should aim their venom at this self agrandizing agent.

The Canadiens surely would have worked a way to keep both Halak and Price for one more season, if it weren't for a player agent keen on owning the pedastal in this scenario.

Does it get anymore pointed than the Jaro Blues mask as a final jab to the Habs organization, only days after an autograph session  n Habs soil?

Think about this long and hard.

If it were you as Habs GM, dealing with the renegade and maverick player agent that Walsh is, seemingly more intent on making a name for himself than with his player's actual concerns, wouldn't you off the player to an ozone franchise that's never won squat, isn't anywhere near, but were willing to part with a first round pick in exchange.

Kudos to Pierre Gauthier for having a backbone when encountering a spineless fish.

Every Habs fan couldn't help but love Jaroslav Halak for all that he did for the Canadines over the past four seasons.

His soul, before it was sold out, was true Les Canadiens!

We, as Habs supportors, team over individuals, should not miss his agent.

The Jacques Plante image on the Jaro mask is all about the agent, not the player.