Yeah, we're going to stretch this out just a little bit longer.  Of course, by the end of this piece, it should be pretty obvious who we collectively think is the best player under 25 in the organization, but we'll be giving him his own feature regardless.  In the meantime, have a look back at the series from the start:  the Introduction, #25-21, #20-16, #15-11, and #10-6.  Also, another special thanks are due to the crew at the Copper & Blue (yes, I'm a poet and I do know it) for the concept.

He's the man who possesses probably the greatest hockey name on this entire list, and he's already a bit of a local legend despite not playing any meaningful games in Canada for the past two years.  That will all change this fall, as Leblanc looks to join the list of famous Harvard dropouts such as Bill Gates, Howard Hughes, Robert Frost, and Matt Damon.  But it's not like we're putting unrealistic expectations on him or anything...  right?

Leblanc will start his post-Crimson journey wearing the decidedly less pretentious maroon of the Montreal Junior Hockey Club after turning professional by signing a 3 year entry level contract with the Montreal Canadiens this August.  The year in Verdun should help prepare him for the professional schedule, the media demands of Montreal, and to put him in top form in time for the Canadian U20 World Junior Championships, a team he is expected to make after being a late cut last year.  He's already helped the QMJHL team become a hot ticket in Montreal, as the Juniors have already sold out a handful of regular season games well before the start of the season.  All this for a player few have actually been able to see play, albeit one that was picked 18th overall by the Canadiens just a year ago.

Leblanc was the 1st overall pick in the 2007 QMJHL midget draft by Val D'Or, even though he had indicated he was not going the major junior route and pursue his education at Harvard.  This forced Leblanc to spend another year playing AAA Midget hockey before going to Omaha to join the USHL's Lancers in his NHL draft year (2008-09).  This lack of exposure might be the reason the scouting reports on him are quite mixed.  Some say his speed is one of his best assets, but others view it as merely average.  For what it's worth, when I saw him play at the 2009 U20 Evaluation Camp in Saskatoon, where he played left wing on a line with Matt Duchene, he always seemed to gain a step on the defenders and cause problems with his acceleration.  Perhaps not surprisingly for a man who was admitted to Harvard, his hockey smarts are well regarded by everyone, with buzz words like 'crafty' and 'great vision' making frequent appearances in scouting summaries.  Rich Michalowski of Premium Scouting sees him as a player in the Sam Gagner mould, a strong two-way talent who will need to develop physically to become a successful pro.  His junior coach, Pascal Vincent, sees a lot of Mike Richards in him. 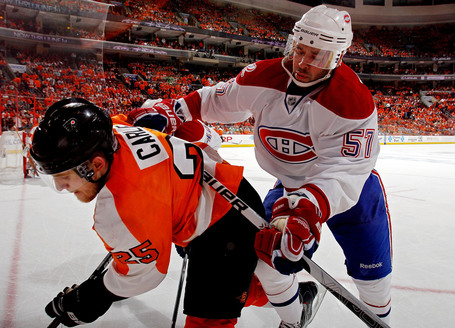 Visual proof that Pouliot indeed did play in the 2010 Stanley Cup playoffs.  All photos courtesy of Getty Images.

Acquired via trade from the Minnesota Wild last November for Guillaume Latendresse, Pouliot had a prolific start to his Montreal Canadiens career, scoring 15 goals over 39 games to finish out the regular season.  However, things got rocky over the final stretch, and in the playoffs, Pouliot was a bit contributor, not scoring a single goal while being relegated to the 4th line more often than not.  He was a highly productive junior player who was selected 4th overall in 2005, but failed to stick with the Minnesota Wild.  So, what exactly can we make of Pouliot at this point in his career?

Pouliot's game is centered around his speed.  At his best, he's the guy who has cheated a little on the breakout play, pushing the defenders out of position and receiving a stretch pass in full stride to create an offensive chance.  This should make him a perfect compliment on a line with effective defensive players like Scott Gomez and Brian Gionta.  In fact, it's precisely those free wheeling qualities that helped Pouliot start his career with the Canadiens on fire:  after getting his feet wet in his first two games coming off a nagging wrist injury, Pouliot had 14 goals and 8 assists in a 27 game span from December 28 - March 20, reaching the scoresheet in 19 of 27 games.  In that time span, he only had 5 games with less than 15 minutes of ice time, a mark he only reached twice with the Wild before the trade.  Then, to close out the year, he only had 1 goal and 1 assist in his final 10 games, and only 2 assists in 18 games (plus one game as a healthy scratch).  In that stretch, his ice time was severely cut, he only broke 15 minutes in half of those games, and 9 times saw under 10 minutes.  (all game stats from NHL.com)

I'm not going to go into excruciating detail on the subject, (leave that for our good friend Olivier Bouchard and his scoring chances breakdowns at En Attendant Les Nordiques) but clearly Pouliot's effectiveness is dictated by his linemates, and he has yet to find a role outside of 'third wheel' in the NHL to this point.  Despite losing that role down the stretch last year, Pouliot is the front runner for the open spot on the top 6 heading into training camp this year.  He possesses the size, puck skill, speed and shot to play that role, he just might not have the hockey sense.  With gradual improvements in his play without the puck, Pouliot should be able to be a decent scorer in the NHL, with an upside of around 25 goals a year.  However, there is a reason the Habs did not want to go to arbitration with him, and did not submit a qualifying offer to him this past June (and then gave him a 50% raise anyways).  He has yet to prove himself a strong player in his own right, but he's shown signs of being a useful player for the future.

Safe to say, this year is incredibly important for Benoit Pouliot. 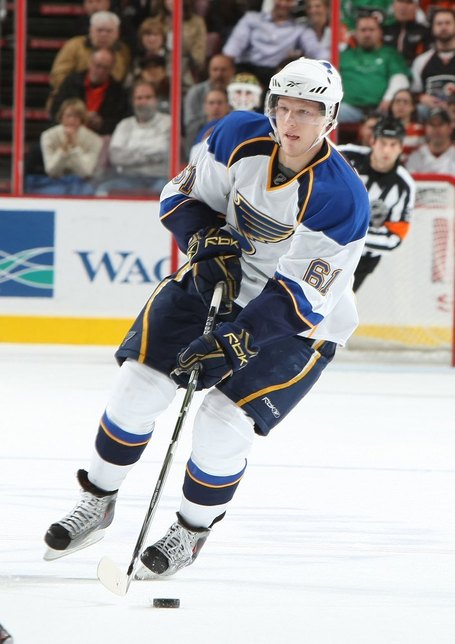 Acquired in the controversial Jaroslav Halak trade in June, Lars Eller is the top dog in the greatest generation of Danish hockey players to date.  He has everything scouts look for in a centre outside a top 5 selection:  great speed, good size, excellent hands and strong hockey sense.  As a 20 year old rookie, he played tough minutes for the Peoria Rivermen and came out with 57 points, despite fighting a bout of mono to start the year.  That 57 point output led the cellar dwelling team in points by 13, and earned him seven games with the St. Louis Blues where he potted his first two NHL goals.  At the end of the season, he suited up for Denmark at the World Championships, where he finished in a tie for second in team scoring with 5 points in 7 games, helping the Danes to their highest ever finish (8th).

In short, Eller fills what has been a desperate need for the Canadiens for many years:  he is a young, playmaking centre who has first line potential.  He's a guy who makes the players he plays with better, and has shown great ability at even strength.  He is a fundamentally sound hockey player with very little downside, and no obvious red flags when it comes to personality or work ethic.  Corey Pronman at Premium Scouting gives this report:

He’s at his best with the puck on his stick as he can be an elusive puck-handler and is an excellent playmaker. Eller displays a solid all-around game as he comes back hard on defense, plays an excellent penalty kill and also has some grit to his game. He won’t be a sniper at the highest level, although he definitely has an average shot that could beat NHL goalies. He has produced at every level he’s played at. The last two year’s stats may be influenced because Peoria, the Blues’ AHL team was simply horrific and Eller’s 57 points led the team despite taking some time to play on the big club.

Eller's immediate future with the Habs is uncertain, though many are pegging him for the 3rd line centre job that was left open with the departures of Dominic Moore and Glen Metropolit.  Dustin Boyd, Maxim Lapierre, Ben Maxwell and David Desharnais are all in the mix for this role, so it's not a given that Eller will be given the job.  With two strong, two-way centres occupying the top 2 spots, the Habs might be able to afford to give a youngster like Eller a shot on the 3rd line, eating up some softer minutes with the idea of getting some decent production from their third line.  There's a chance Eller will be sent to Hamilton, but he appears to be the forward who spent most of last year in the AHL that has the best shot at making the Canadiens right out of training camp.

When I was floating around the idea of doing this list, I kept wondering to myself:  Where would the panel have put Jaroslav Halak?  Then I realized Halak had turned 25 in May, and would not have qualified for the list as a result, but it was an interesting thought.  According to our prognosticators, we traded Halak for our 3rd and 20th most promising youngsters.  So, in fairness to Pierre Gauthier, I think we can safely say that we think it was a pretty good return on investment in that light.

Well, here's the moment you've been waiting for.  In what was obviously a two horse race for the top spot on our list (no players listed previously got even a second place vote), the current darling of the Habs faithful came up a little short.  We'll talk more about the other guy later.  Subban is clearly the star child of the Canadiens organization right now:  his energy is contagious, his play is enchanting, and his results to date are staggering.  Here's a quick rundown of what's happened to Subban since being drafted 43rd overall in 2007: 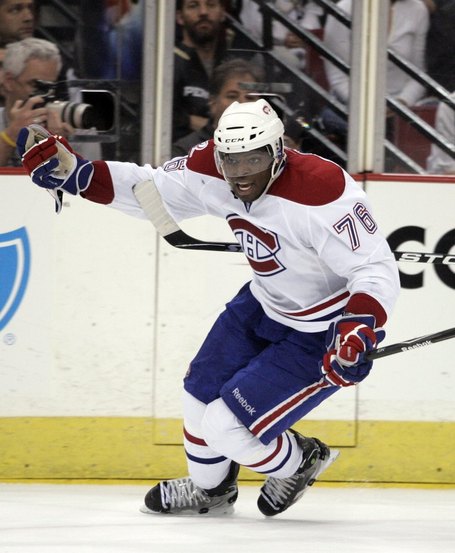 He's a puckmoving defenseman with incredible skating ability, great puck control, good passing skills and a decent point shot.  His skills translate well into being a PP quarterback, as he prefers to hold onto the puck, drawing defenders to him before making a pass or doing a spin-o-rama to create an even greater advantage.  While his moves are of the high risk variety, his skill pays off more often than not, even against NHL veterans.  He always makes plays with his head up, and rarely retreats with the puck, pushing the play forward towards the opponent's goal.  His defensive game lacks polish, but is passable at the NHL level.  This is what seperates Subban from his main competition in the OHL, Drew Doughty.  That being said, Subban has always been able to dominate at every level to date, and there is little reason to doubt his abilities won't translate well into the NHL long term.

When Subban was drafted, his first press conference had all the Montreal media glowing about his confidence and personality.  He joked about his name (it stands for Penalty Kill), he constantly smiled, he even claimed he was going to make the Habs out of training camp at age 18.  This didn't happen, but now at 21, there's no doubt he will be in the starting lineup this October, potentially lining up beside Andrei Markov on the top defensive pairing.  He's eligible for the Calder Trophy this coming season, and if you asked him about it, he'd probably say he was going to win it.

It's quite safe to say that we haven't seen a player as skilled as Subban with that level of confidence in the Canadiens system for a long time.  In fact, for a generation of Habs fans, he's one of a kind.