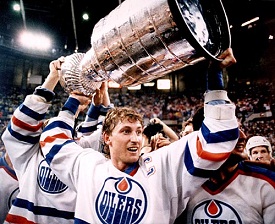 Has it really been 22 years since the Gretzky trade shocker of the summer of '88?

August 9, 1988 was truly a landmark day in the history of the NHL and hockey for Canadians in general.

Four years ago at the older version of EOTP, I did a three part look at the trade, putting hindsight into action, and analyzing it several ways.

It's in depth, let's say. Something that takes some time to go over. Take a look and bookmark it for a rainy day!