Share All sharing options for: A Ken Dryden Birthday Tribute 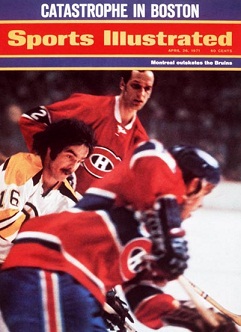 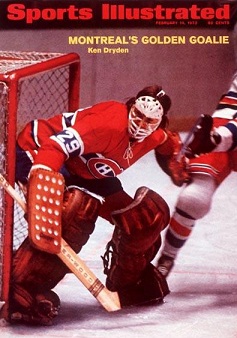 When the name of Ken Dryden comes up among hockey fans, several images and thoughts vividly comes to mind. It could be that of the lanky Dryden's infamous pose, leaning on his goalstick, visions of an octopus-like stretched frame, sprawling to make a save, or that of his meteoric rise to hero status in mere weeks in the spring of 1971, as he joined a cast of Canadiens legends in defeating the heavily favoured Boston Bruins on the way to a surprise Stanley Cup victory.

Today, is Dryden's 68th birthday, and the images of his first steps with the Habs still resonate among those who witnessed them. Who could forget, the studious 23 year old Cornell University grad seemingly coming out of the blue to help the Canadiens to a 17th Stanley Cup? 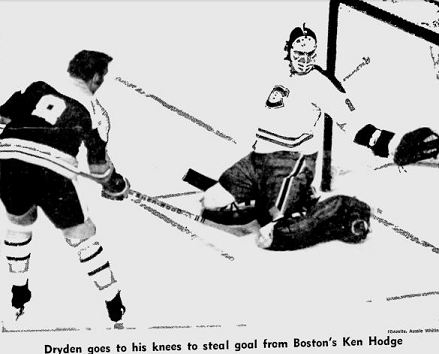 As a tribute to Dryden, I chose this day to present video highlights of 1971 Game Seven of the Habs’ tremendous upset of the Bruins in the opening round of the playoffs, a game and a series in which Dryden was quite prominent. To my great joy, I obtained this rare and precious video earlier this summer from another Habs video trader and I am happy to share it with you.

Presented on the New England Sports Network (NESN) some years ago, the highlights are actually from the CBS television broadcast with the great Dan Kelly doing the play-by-play call and Jim Gordon doing the commentary.

The video shows five of the six goals scored on the April 18 Sunday afternoon game in Boston, which was won 4-2 by Montreal. I was able to edit my footage, adding a black and white clip of the game-ending Habs player's celebration and splicing it to Dan Kelly’s call of that moment. You will also see revealing post-game interviews with Bobby Orr and Phil Esposito that shed light on what a stunner the loss was from a Bruins point of view.

In Dryden's landmark book of his career - The Game - he recalled the final moments of that '71 series.

"A burning, freezing feeling. In my back, in my arms and neck, slow at first, then surging through my body. Hearing a referee's whistle, and looking at the clock - 0.32 - then at Orr, his stick across his knees, bent double, squeezing out the breath he couldn't find; at Esposito, sweat cascading down his face, his eyes, his cheeks and mouth drooping in weary sadness; then at our bench, standing, jumping, hugging each other, and knowing, for the first time, knowing it was over. Then it happened - seven games of feelings, too busy, too afraid to feel before, were suddenly released and swept over me, and for thirty-two seconds I got a rare and precious gift: I felt victory while it was happening."

Included below is the game summary where you will see that Dryden faced 48 shots in that game, which is over the 41 shot average he faced during the course of that series. 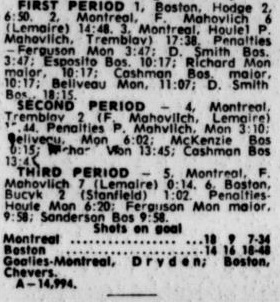 Dryden's performance that April and May remain cemented in minds of Canadiens fans, forever drawing comparables. As recently as this past spring's derailing of the league leading Washington Capitals, goalie heroics such as those by Steve Penney in 1984, Patrick Roy in 1986 and Jaroslav Halak five months back rekindle memories of Dryden's standard.

In the goalie's own words, he had, in a short span, achieved infamy in this series against the Bruins. Here is how he put it:

"Though we would need to go on and beat Minnesota and Chicago to win the Cup, though I've played more than four hundred games in more than six seasons since, in those seven games, games 7 through 13 of my NHL career, I did the only thing I've ever done that will last more than twenty years of a sports fan's memory."

For more on Dryden from Eyes On The Prize, check out the following links.

Habs Robbed Bruins of Dryden in 1964

Blackhawks and Canadiens 1973: Game One and Six Audio From a Classic Stanley Cup Final

Canadiens and Sports Illustrated Covers Over the Years

If Dryden Had Been A Bruin

Also, from Sports Illustrated magazine, from the cover at left - page top, a great article titled "Brief Reign Of The Lordly Bruins".