The next group of five players were pretty hotly contested amongst our panel.  They include several players that appeared in Montreal's lineup at some point during the 2009-10 NHL season, and the panel at large walked away with mixed opinions on their future as a result.  Also gracing the list is a well regarded new addition to the team, who the panel hasn't yet formed conclusive opinion on.  For players 25-21, click here.  For players 20-16, click here.  To re-introduce yourself to the panel and the concept of the Top 25 Under 25, click here.

After three seasons of apprenticeship in Hamilton, Mathieu Carle is at a crossroads in his career with the Canadiens.  A puckmoving blueliner with a right handed shot, Carle has a lot going for him.  That's not to mention the fact that he's one of a few Quebecois players in the Habs system that is on the cusp of the NHL.  Unfortunately for Carle, what was developing into a breakthrough season was cut short due to injury, something that has held him back in the past.  Carle had 15 points in 31 games in Hamilton last year, while being deployed by coach Guy Boucher as his number 1 blueliner to start the year.  The role of #1 blueliner was eventually fulfilled by P.K. Subban, who seized the opportunity and now looks to have a regular spot in the 2010-11 Canadiens starting lineup.

Carle isn't blessed with great size, but he's the kind of blueliner that can fill a nice role on the team's bottom pairing if all works out.  There is a spot open on the Habs blueline to start the year with the injury to Andrei Markov, but the acquisition of Alexandre Picard makes Carle's chances of cracking the roster on opening night that much more difficult.  Carle doesn't possess the PP skills that Picard does, which may be the final factor in sending him back to Hamilton.  He would have to clear waivers in order to do so, but with only 3 NHL games and coming off an injury, he's a safe bet to clear waivers after training camp.  That is, unless Boucher backs up his assertion last year that Carle was NHL ready and requests the Lightning to take a chance on him.

Maxwell ended last season on the Canadiens roster, a late season injury callup who didn't get into much action and was caught in a numbers game with regards to the CBA, which only allows a certain amount of demotions and callups after the trade deadline.  He had injury concerns in junior, but has overcome those as a professional with back-to-back healthy seasons.  He has progressed steadily at the AHL level, posting 58 points in 73 games as a rookie and 44 points in 57 games as a sophomore.  However, in 21 NHL games to date (1 in the playoffs), he has yet to record his first NHL point.

Maxwell is a playmaking centre who can play the high forward position on the powerplay, and even the point if need be.  He likes to have control of the play, allowing his teammates to gain favourable positions to lead an offensive attack.  He has good skating skills and a decent wrist shot.  With the additions of Lars Eller and Dustin Boyd, Maxwell is likely ticketed to Hamilton where he will battle it out with David Desharnais for the top centre spot.  He remains eligible to be classified as a rookie for the 2010-11 NHL season, despite playing 21 games over the past 2 years in the NHL. 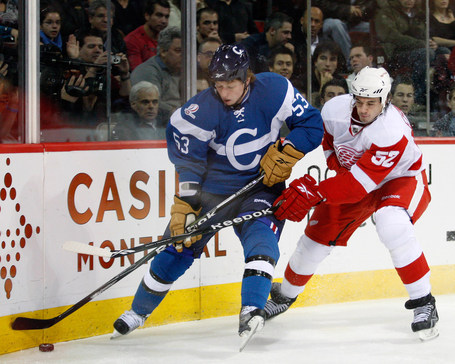 Another 2006 draft selection of the Habs (taken after Carle and Maxwell), Ryan White climbed up the depth chart considerably in 2009-10, earning 16 games with the Canadiens in various callups mid-season.  In those games, he recorded his first two NHL points, and displayed the hard work and grit that he will need to provide on a daily basis if he is to make the NHL.  White projects as a 3rd or 4th line winger who finishes his checks and is willing to defend his teammates with his fists, despite his smaller 6'0", 201 lbs. frame.  White recroded 173 PIMs in Hamilton last year to go along with 17 goals and 34 points.

White also has a chance to crack the Habs roster out of training camp, but he'd need to show significant improvement in order to do so.  His gritty game works to his advantage, but Martin protected White and gave him soft minutes in his games, something he likely won't be as keen to do over a full season.  With Mathieu Darche signing on for another season, another stint in Hamilton is likely, but look for White to appear in the Habs lineup when injuries occur.  White's footspeed is a concern, but since his game is geared towards playing a depth role it likely won't hold him back too much. 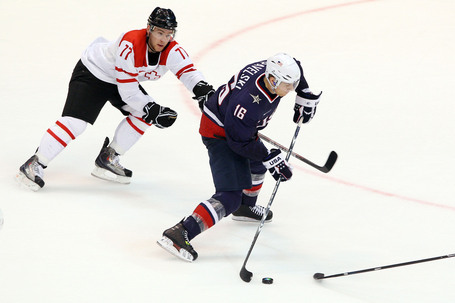 Weber had a tough 2009-10, especially considering how strong his 2008-09 season was as an AHL rookie.  That being said, he was challenged greatly in the year, losing some of his minutes to Subban at the AHL level, while also playing in the 2010 Olympics for Switzerland, a level of competition he was not prepared for.  Switzerland's lack of depth on defense gave him the spot, and his play particularily against a strong USA team left a lot to be desired.  But then again, it isn't a situation he'd have to face if he were from any of the Big 7 international countries, so it's best to keep that in mind.  Weber is a smaller defenseman known for his huge shot, a trait that allowed him to make the AHL All-Star game as a rookie and see time in the NHL playoffs in 2008-09 when Mathieu Schneider and Andrei Markov were injured.

While Weber's defensive game will need to improve to advance to the NHL, it will never be his strong point.  His strengths will come on the power play, and having to learn to play last year in the AHL without top PP minutes was probably a boost for his learning curve.  Weber will almost certainly be heading back to Hamilton to start 2010-11, but he's in the final year of his entry level contract, so he'll have to start to make a push for playing time in the NHL again.  Look for Weber to be the Bulldogs' go to guy on the PP this coming season.

The Habs moved up in the 2010 Entry Draft to pick Tinordi 22nd overall, but our panel is split as to where to put him on our future list.  Some see him as a great combination of size, grit, skating ability and leadership that translates into a solid top 4 blueliner, who could even develop into a top shutdown blueliner.  Others see him as a long term project who might reach the NHL, but in a complimentary role.  His move to London of the OHL will give our panel a greater chance to follow his progress in his first season after being drafted, and we should get a better read on him as a result.  Tinordi attended the USA's U20 Evaluation camp, but was cut before the team played their exhibition games.  Tinordi was the captain of the U18 team who won gold in Belarus this past spring.

Corey Pronman of Premium Scouting describes him like this:

He sees the play developing well and when faced with oncoming forwards edges them to the outside and then closes the gap like a pro either by forcing the puck away from them or by separating them with his body. His puck skills are okay, but he is limited in that role. His skating is good for a big man but could be improved upon as he will have trouble with the higher-end skaters at the next level. He needs to keep his mean streak intact although he can take dumb penalties and he can sometimes take himself out of the play trying to be too physical.

By going to London, rather than Notre Dame of the NCAA, it can be assumed that his mean streak will be encouraged.  Tinordi will be allowed to fight, and the smaller rinks of the OHL will provide ample opportunity to lay punishing bodychecks.  It also helps to have a coach in Dale Hunter, who is well known for his love of the physical play.  Another benefit to joining London will be the increased playing time:  Tinordi will be looking at a 70 game schedule, double what he would have faced if he had gone the college route.  However, it also puts him on the clock:  Tinordi's rights will expire after 2 years, rather than the 4 year window the Habs would have had if he went to the NCAA.