Late yesterday, I introduced EOTP's Habs Top 25 Under 25 project.  It's based on the series The Copper & Blue have been doing this year, and I've recruited all of EOTP's writers as well as some outside help in the form of Topham from Lions in Winter and Brian La Rose of Habsworld.net.  The only requirements for all players in this ranking is that they must be under 25 as of Sept. 15, 2010, and the Montreal Canadiens must hold their NHL rights.  These are the results of the votes cast by each panelist, weighted equally.

The following players are either viewed as longshots by the panel, or they are players that are well out of the limelight but possess legitimate potential.  All five of the players did not garner a top 25 placement from every panelist, and there was generally a wide range of opinion amongst the panelists who put the player on their ballot.  Over and over again, the idea of whether a player was likely to make an impact on the Habs roster was prominent in the panelists minds. 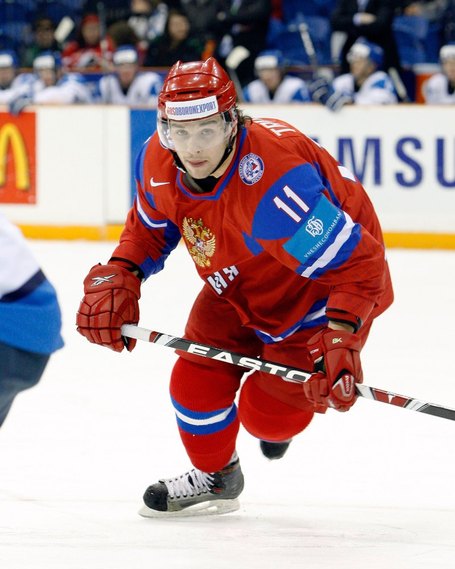 Trunev is a bit of a question mark going forward, as he currently plays for Severstal Cherepovets of the KHL.  He has progressed nicely through the Russian junior ranks, and due to the lack of a transfer agreement between the KHL and NHL, the Habs hold his NHL rights indefinitely, allowing them exclusivity to sign him when his KHL contract expires.  Trunev was taken 3rd overall in the 2008 CHL Import Draft by the Portland Winterhawks of the WHL, but never reported due to his KHL contract.  He made his IIHF debut this past year at the U20 World Junior Championships in Saskatoon and Regina, tallying 4 points in 6 games on Team Russia's second line.

Trunev's greatest assets are his speed and shot.  While he has yet to be placed in a scoring role in the KHL, he projects very well there to become a top line forward.  He likes to lead offensive rushes across the blue line and drive to the net, but he tends to stick to the perimeter when his team is setting up in the offensive zone.  He doesn't possess great size, but he's big enough that his size won't be a factor in holding him back.  He's still quite young, as he will only turn 20 on Sept. 7, so there is still good reason to keep an eye on his development in the coming years.  Of course, whether or not he'll commit himself to leaving a potentially lucrative KHL career for a shot at making the Montreal Canadiens has yet to be seen.  There are currently no talks to bring him over.

Drafted just this past June, Gallagher comes with more hype than the typical 147th overall draft pick.  He's a spunky little winger with tremendous hands that surprisingly compliment a decent pair of fists, notching 41 goals and 81 points in his second season in the WHL, while racking up 111 penalty minutes.  So why did he fall all the way to the late 5th round?  Simple:  he's only 5'8", and does not possess elite speed.  It's similar reasons to why fellow Habs prospect David Desharnais and ex-Habs prospect Corey Locke were not considered top draft choices either, but Gallagher appears to be cut from a different cloth than those two.  He reminds me a lot of fellow WHLer Brandon Kozun, who starred for Team Canada at the U20 World Juniors this past year.  Gallagher, like Kozun, is high on Hockey Canada's radar, having recently taken part in the summer evaluation camp for the U20 team.

There's a lot of reason to like Gallagher, who makes the list ahead of fellow 2010 draft picks Morgan Ellis and Mark MacMillan, despite being picked after them.  But that being said, the real test for Gallagher now will be potentially playing at the international level, improving his acceleration, and adapting to the pro game.  The Vancouver Giants, Gallagher's WHL team, always have a competitive squad, so a Memorial Cup appearance could also be in his future.

Signed as an undrafted free agent last summer, Engqvist will be coming over to North America after spending a final season with Djurgården of the Elitserien in Sweden.  It was his fourth season in Sweden's top league, and his best production wise.  He managed 14 goals and 12 assists during 51 regular season games, but really stepped it up in the playoffs, where he posted 13 points in 16 games.  Those strong improvements earned him a spot on Sweden's bronze medal winning World Championship team in May, where he played a bottom six role, posting four points in eight games.

Engqvist is not the sexiest of prospects, but he's a big right handed centre who projects well as a bottom six forward.  The knock on his game is that although he is bigger and plays well defensively, he isn't all that physical of a player.  So he's a bit in the Radek Bonk mould.  Engqvist will likely start this season in the AHL, but could see time in the NHL if he adjusts quickly to the smaller rink size and more condensed schedule.  He potentially could fill a need for the Habs going forward, as they lack both centres with size as well as ones that are right handed. 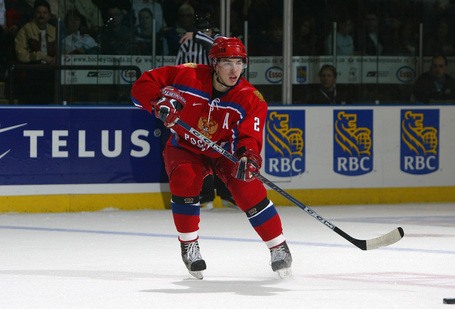 Once a highly touted prospect, Emelin is an example of the kind of player that make NHL GM's very weary of selecting Russian players today.  Twice now, the Habs have tried to negotiate a deal to have him come over to the NHL, only to have him continue his KHL career instead.  Once considered a reckless renegade defenseman in the KHL, Emelin has calmed down as he has become a veteran, posting a career low 50 PIMs last year for Ak Bars Kazan (his career high is 131 PIMs).  He really made an impact in the Gagarin Cup playoffs, scoring 5 times and posting 13 points to help lead Kazan to the title.  He was named the top defenseman in the Gagarin Cup Finals, and the strong finish earned him a spot on Russia's silver medal winning World Championship team in May.

Emelin's game is built around strong defensive and physical play.  He's a good skater for a defenseman, keeps it simple offensively and is known for making big open ice hits.  He has been accused in the past of hitting players in vulnerable positions, making him a controversial player in the KHL.  His contract expires next year, and guess what, word is he's willing to try the NHL again.  He scored lower on this ranking because many panelists didn't believe he was serious in ever suiting up for the Canadiens. 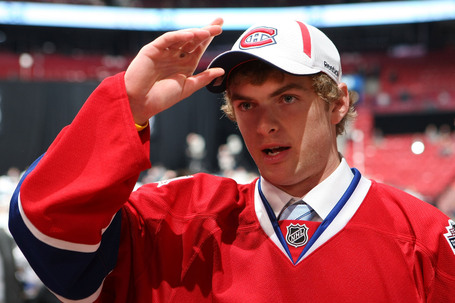 Bennett is considered a long term project, as he was drafted based on his raw potential out of a Connecticut preparatory school in which he only played 15 games during his draft season.  He advanced to the USHL last year, making their All-Rookie team with 23 points in 53 games.  He'll continue his rapid ascent up the ranks by attending the University of Michigan this fall.  The Habs will still have four years in which to evaluate his progress at that level before deciding on whether or not to offer him a professional contract.  Despite his strong USHL season, Bennett was not invited to this summer's Team USA U20 evaluation camps.

Bennett is known primarily for his speed and puck moving ability.  What is also well known about him are his bloodlines:  his grandfather Harvey was the goalie of record when Maurice Richard scored his 50th goal in 50 games, while his uncles Curt and Harvey Jr. became NHL players, too.  Bennett is a smaller defenseman, though at 6' tall, he should be able to fill out so that his size isn't a factor in his advancement when it comes time to turn professional.