Share All sharing options for: One Time Habs "Can't Miss Kid" Bonar's Story - One Every Hockey Playing Teenager Should Grasp 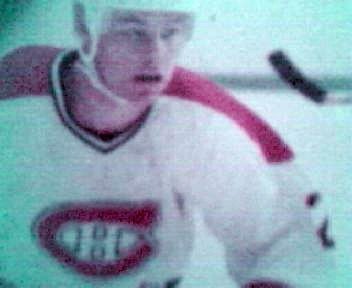 Robert L note: This is from the site archives. A couple of years ago, I looked up former Canadiens prospect Graeme Bonar in a Google search and was quite surprised by the story that soon revealed itself. I did not link to or post on the Globe piece ot the CAMH article at the time, but something in his tale stuck and stayed with me. Bonar's story has nothing to do with great hockey goals scored or championships won, yet his story is miles more heroic and compelling.

Early in his life, hockey came easy to Bonar. He was a natural. He dedicated every ounce of his being to his dream of playing in the NHL. Everything that came after he was on the verge of achieving it, was a whole other nightmare. Born and raised in Mimico, Ontario, Bonar's NHL dreams are shared by thousands of youngsters lacing up skates each year. Where those dreams ultimately led him, involved a darkness opposite to the expected limelight.

If often have thoughts of junior hockey players in this country, and what happens to them as they sacrifice education for a shot at the big leagues. Some players, inevitably, slip through cracks. Bonar's crevice became a canyon, one that took everything he had inside to climb out of. After the final score, when the ice had melted, he became the hero he always sought to be - behind a microphone, usually in a suit and tie, and not a hockey jersey.

I'd like to thank Graeme personally, for sending me some pics, and making me aware of the content at his Facebook page. Feel free to stop by Graeme's page and offer your encouragements.

In the mid 1980's, the Montreal Canadiens had endured a rough patch of early playoff exits three years running. Then General Manager Serge Savard had taken over, and within a few seasons, he drafted an excellent crop of kids brimming with talent and oozing confidence. The names are all hockey lore now. There was Roy, Chelios, Lemieux, Richer, Corson, Momesso and others. As a group and individually, they all showed great promise, and Habs fans were getting quite excited at the prospect of these kids regenerating the Canadiens hopes for seasons to come.

One player in the fray missed the party altogether. You would have to be an avid long time Canadiens fan for the name Graeme Bonar to mean anything to you. Bonar was a third round choice of the Canadiens, 54th overall in the 1984 draft. I recall him playing with the Sault Ste. Marie Greyhounds of the OHL around 1985. I had always wondered just what had happened to him. He had natural goal scorer written all over him. After reading about him play in the 1985 Memorial Cup, and hearing of his first steps with the Canadiens, he truly seemed to be a "can't miss kid".

Bonar's destiny, unfortunately, had other challenges in mind. After tallying a whopping 66 goals and 71 assists for the Soo as a 19 yr old, one year after being a 15 goal scorer selected by the Habs, Bonar was traded to Peterborough to round out his junior career. The Canadiens had been thrilled by the progress he had shown, and big things were being expected of him when he turned pro.

He arrived for his second Canadiens training camp in the fall of 1986 and did not disappoint as he took the lead in pre - season scoring. For a kid who grew up empassioned by the game at every turn, Bonar was primed to have rubbed shoulders with future Hall Of Famers such as Guy Lafleur, Larry Robinson and Bob Gainey. Few could brag about such big league dreams coming true, but it was then that Bonar's dream crashed down hard.

A severe injury in camp essentially slammed the brakes on Bonar's hopes. An opposing player fell on Bonar's leg, snapping his achilles tendon. It was career threatening. Due to swelling, trainers needed to cut off Bonar's skate boot to remove his foot. Judging by the immediate pain, grim facts surfaced fast. Bonar was told his career might be in jeopardy. The damage meant he would basically continue playing on one good leg. 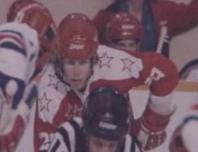 As Bonar had dedicated his entire life to nothing more than succeeding in hockey, he was ill prepared for a life without it. He chose to bravely, if ill - advisedly, soldier on in the game, half the player he once was. Painkillers made playing tolerable, but he could hardly ever be quite the same without speed to match his natural instincts.

Rejoining the Sherbrooke Canadiens late in the 1986-87 season, Bonar still struck for 6 goals and as many assists in the final 21 games. Despite the setback and prognosticated diagnosis, his output was encouraging enough for him to continue on. Problematic was a growing reliance on the painkillers he still took, and mixed in with the alluring high life style enjoyed by athletes on a professional paycheck, Bonar developed a set of evils that would eventually outlast his hockey skills.

Bonar returned to Sherbrooke the following season, sticking around long enough to score a final goal for the Canadiens organization. He would soon depart on a journeyman's hockey escapade in search of his lost game. He would toil in minor leagues for several seasons, with stops in such places as Flint, Jacksonville, Saginaw, and Indianapolis, all the while rarely unpacking his suitcase long enough to take up root. Along the way, a broken wrist and fractured collarbone kept up his dependance on prescription drugs. Clinging to hockey as his only means of identity, he drifted as far as roller hockey with the Florida Hammerheads in 1993-94. 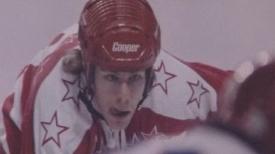 Ten years down the road in 1995, Bonar realized he'd hit rock bottom hard. The mental and physical anguish of dealing with his lost dreams had pushed him into the empty voids offered by booze, sex, and drugs. He became further depressed and alienated from his loved ones when he realized more and more than he did not have the life skills to gain regular employment. Possessing no qualifications to fit himself into the working life, Bonar was at an emotional crossroads.

Without friends, family, or any means of support, he feared his life was over, but realized that he was scared to die. The fear of it ignited a desperation inside him, one that he hadn't felt since dedicating himself to a life of hockey at a young age. He vowed to achieve sobriety, and once he did, he would put his life experiences to good use.

After coming clean with help from Alcoholics Anonymous, Bonar enrolled in addictions counsellor courses, becoming involved with several organizations that sought to help those who had travelled Graeme's path in life. Today, Bonar has been clean for close to 15 years, and uses his two biggest passions - helping others, and hockey - by being an awareness speaker all over Ontario and in New York state. He has done volunteer work - coaching, mentoring, fundraising, refereeing, and speaking out - for a wide ranging array of athletic and charitable organizations. His work has teamed him once more with the Montreal Canadiens, as well as working with the Canadian Olympic Team and the Ontario Hockey League.

It is an accomplishment that might once have seemed impossible while plunged in the depts of despair. Bonar now finds that the keys to his own happiness involve knowing what he wants from life and growing towards it. Remaining active and preaching the powers of belief in self, help him balance life's work, and it has rewarded him in bringing him closer to his co - workers, family and daughter Chantal.

In June of 2007, Bonar was a more than worthy recipient of a CAMH Transforming Lives Award. 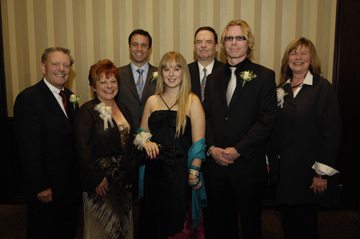 Siri Agrell of the Globe And Mail was on hand at the time to speak with Bonar, and his quotes point out a major failing point of junior hockey, then and now.

"You aren't prepared," he said of the abrupt end to his dream. "When the curtain falls, it's a tough thing to deal with. I think there should have been more support, because there was none. There's not enough education, there's not enough help, no matter when you stop playing. At the time, I just wasn't ready for life after hockey," he said. "I think it's something a lot of athletes struggle with, not just ones who had careers ended early."

What Bonar relates, is in plain speak, the ugly hidden underbelly of our country's fascination with the glory of hockey. Few players get to live out their NHL dreams, yet many dream of it. The odds are lottery - like. Those who reach a crescent, more often than not, discover a cliff at some point. Hockey doesn't want to know about it's failures. Bonar's tale, was a story long before you read this.

Peter Selby, a clinical addictions program director for the Centre for Addiction and Mental Health, puts it this way:

"Professional disappointments can often set people on the path to addiction. Young people must be given more guidance when entering the world of competitive sports. Parents must make it clear that there is life beyond competition, and ensure that children maintain strong relationships outside of sports so they retain a support network if they are hurt. When you're dealing with a young person, who hasn't developed neurologically, you're sitting on a perfect storm should something negative happen. The real balance is how do you get them to be high achieving but still realistic?" 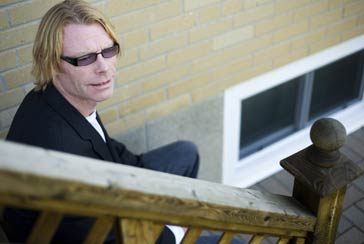 Bonar's story is one of coming full circle in life, and it is one not without it's own ironies. Once ill prepared for a life beyond the game of hockey, events that occured then likely rendered him a case study of all that could wrong when education is forfeited for a life of nothing but pucks and fame. There was a time when his choices could have underlined all what not to do in life. Nowdays, Bonar is a role model, and not entirely an unlikely one.

Looking in the mirror one day, through the haze of a foggy past and a dream run afoul, Bonar made a choice, and opted for the helping hand rather than the toe tag. No one was there to hold up the mirror for him. 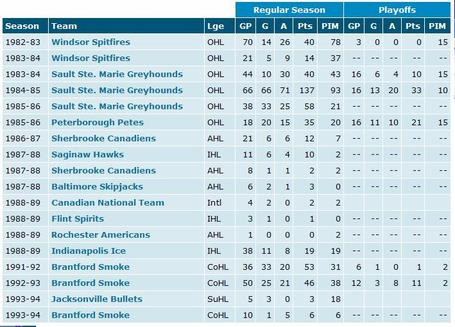 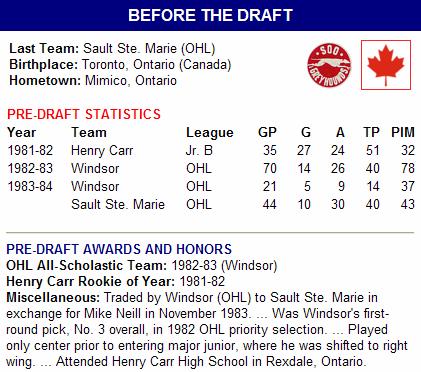 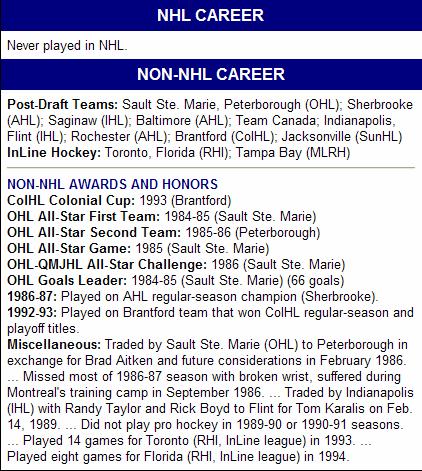 This You Tube clip below features Bonar with the Sault Ste. Marie Greyhounds was found at his Facebook page. It is about all the video that can found on him, other than the snippets in CAMH link. Bonar is number 29, and can be seen at the very beginning of the clip, and again near the 2:30 mark. As you'll see, there's no hockey being played here, just one kickass 8 minute brawl between Terry Crisp's Hounds and Bill Laforge's Hamilton Steelhawks in 1985. The late Bob Probert, a team mate of Bonar's, has a couple of feature bouts.