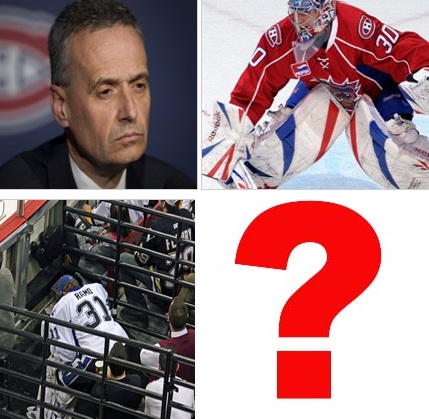 It is not as though the Montreal Canadiens organization ought to call a full blown press conference to announce and explain every minor deal the club makes, but they surely could be more forthcoming in their manner of accomodating the press.

The deal was somewhat baffling on first take, and yours truly among others, got caught up in the ozoned details and unexplained nature of it. From many parts, a lot of questions were fired into a great void without much of an answer from GM Pierre Gauthier on the motives behind it.

Gauthier has a certain method about him when confronting the Montreal Media Madness. Unlike Bob Gainey before him, he gives a good quote or two, wraps it in a provokative thought, and then openly says to further prodding that its time he zips his lips. In the instance of minor deals, the team simply issues a press statement regarding the player(s) being acquiring that never contains a shred of thought on why the traded player is leaving the organization.

Traditionally, that is not the purpose of the press release per se, but something as simple as a five minute conference call to reporters, with one simple statement in mind, would go a long way to clarifying thoughts and explaining motives to media and hence fans of the team.

In this area, the organization comes up short in recognizing and respecting their fans needs via the media

They are not helping themselves much by proceding this way, because in the interim of the story breaking and the real story emerging, all kinds of things (untrue and speculative) are written and needless thoughts are formed.

Desjardins' case is even more particular and needy, and the ensuing confusing is mighty testament to what will occur every time in the future when details are not forthcoming.

The departing goalie is one of a few francophone players in the organization at the moment. No need to reindulge ourselves into what Quebec born players mean to media and fans in the province. Goaltending itself is also a hot topic, at any given time.

So you have a goalie, a francophone, and a trade. Hmmm!

Is it not somewhat predictable what will occur?

Consider Desjardins is a sympathetic player who has come a long way in his career. His tale reads almost like a feel-good hard luck story. Undrafted, the kid never gave up, dug in his heels in junior despite doubts about his talent level, and emerged a Memorial Cup winner. Signing a contract with the Canadiens, he then went off to Cincinnati and won a Kelly Cup. Next came an AHL challenge in Hamilton, in which he posted interesting numbers, league leading ones that gained him accolades along the way. Despite misgivings about him, he was threading together successive positive seasons and in the eyes of some, was about to knock on the Canadiens goaltending door this coming training camp.

So the Montreal francophone press and fans are pulling for the kid and want him to do well, but....he's not quite in the team's bigger picture, and he's trade, to the dismay of some.

And in all this, the Canadiens and Gauthier say not a word!

It's a shame, because the real story here is a good one, and much better than the press the club and the trade itself received since Tuesday.

Francois Gagnon, in a La Presse article titled Ramo instead of Desjardins! Really? (Ramo plutôt que Desjardins! Vraiment?) had this to say:

By unveiling the news in the middle of the night on Monday, Pierre Gauthier did not indicate in his press release, not only what motivated him to trade another francophone, but worse, also replace a goaltender who has had a winning record everywhere he's played by one who has posted inferior statistics.

In all, he must have a good reason or two. I'm just anxious to hear them...

In all, he must have a good reason or two. I'm just anxious to hear them...

I understand fully that Pierre Gauthier is not in position to make friends, but often we get the impression he'd rather let his clientele dangle.

Once I got past the initial feelings of disbelief, it was confusion that took over my thoughts as I tried to figure why - in the same summer you traded away perhaps the finest young goalie in the league, let alone the organization - you would immediately trade another promising young goalie for a castaway who has been relegated to KHL duty?

I fail to follow the logic of acquiring a player (in this case, simply his rights) who cannot perform for the organization immediately in some capacity somewhere on the depth chart beginning now.

Given the relative uncertainty in Montreal – not knowing how Carey Price will respond to pressure and Alex Auld ’s seemingly recent status of journeyman, the move is baffling. Desjardins was one of the best young goaltenders in the AHL while Rammo on the other hand, has not shown an ability to pay with the big boys, although he did play his handful of games on a defensively challenged Lighning squad.

So there you have it, five perspectives all written from the view behind a muddied lens, thanks to a trade announced in the middle of the night by an uninforming GM Gauthier.

In the interim, opinions were strongly formed, the media stumped, and fans misguided to the true notions behind the deal. It's just plain wrong.

The francophone press, like good houndogs on any trail, pursued the story another day, straight to a source with no motives to sidestep. Credit them for digging up all that we needed to know.

In talking to Cédrick Desjardins himself, two french papers managed to nail all the reasons why the deal went down in the first place. Not only are those reasons simple and understandable under the circumstances, they could just as easily have been relayed by Gauthier himself.

Eric Leblanc of RDS (Tampa Challenge Inspires Desjardins / Le défi de Tampa inspire Desjardins) managed to put together quotes from both Desjardins and Canadiens' public relations man Donald Beauchamp to advance what was behind the veil.

"At first I was caught off guard, because I wasn't expecting it and was readying myself for the Canadiens' training camp". - Desjardins

Concerning Ramo, the Canadiens Vice President of Communications, Donald Beauchamps, confirmed that he will play out his season in Russia.

Consider it as a favour done to Cédrick Desjardins, as Sanford and Robert Mayer will be our goalies in Hamilton for the upcoming season. Once he has completed his contract in Russia, Ramo will become a goalie with NHL experience for the Canadiens organiation.

Now, there's a starter to a fire. Desjardins was out of the picture in Hamilton it seems, although the Canadiens signed him to a contract on July 20, nineteen days after signing both Alex Auld and Curtis Sanford on July 1.

This info opens the speculative thinking caps nice and wide. Was Desjardins battling for positioning with Auld for the backup job in Montreal, with Sanford for the starter's role in Hamilton, or with Robert Mayer for the backup role.

Either way, and it is beside the point now, the Canadiens will not have a fifth organizational goalie to supply to the ECHL Cincinnati Cyclones, who are continuing their affiliation agreement with the Canadiens.

Beauchamp's statement claims that Desjardins no longer fit into team plans. Why then, did Montreal put him under contract on July 20?

A dumbass guess, would be because Desjardins had accrued a certain value. The favour Montreal has done for him by trading him to Tampa could just have easily been done by allowing him to become an unrestricted free agent, could it not?

By signing him, Gauthier was able to gain an asset in Ramo - that's a good thing!

So, why not pounce on the opportunity to make oneself appear intelligent under the circumstances. Only Pierre Gauthier can answer that one!

Later on Wednesday, Le Journal de Montreal's Jean-Philippe Bertrand uncovered the nugget of truth. Desjardins, through his agent, hinted that if he was no longer in the Habs' plans, he didn't want to twist in the wind.

Alas! So much muck and mire to scrape off for simple discovery!

After seeing that Jaroslav Halak had been traded to the St. Louis Blues in June, Desjardins thought he had an NHL shot. But when the Canadiens signed Alex Auld, the cards were laid on the table.

No longer convinced he had a chance to graduate to the Canadiens, the 25 year old athlete did not hide his opinion to his superiors that he felt he would have a better shot at the big leagues with another organization.

"It wasn't openly put that way, but my agent made it known that it would be preferable that if they were not intending to give me a shot, that they should trade me," Desjardins added.

So, for all intents, Desjardins asked for the trade. That's the story. The whole of it, and the origin of it. That's it and that's all.

In the media and in minds of the fans, trades and the details behind them, mostly originate from the Canadiens organization themselves, but as we see, this is not always the case.

We've all been trumped, stumped, duped and played.

Just a little insight would have been appreciated, Pierre!

Like many of us, I want to like Pierre Gauthier and want to have faith in what he does, but why does he have to make that so difficult for us fans?

It's a runaround of sorts, when we want conciseness.

Is that too much to ask?

The Canadiens, often accused of not providing a path for Quebec born prospects, have enabled one of their own, let's suggest, to reach the NHL.

In signing and grooming the long shot Desjardins, the Habs did a good thing, but that all becomes lost in this embroglio.

Like everything else bottom line, it won't matter to them until the team bites it and the sellouts cease.

Whether it is the organization or Gauthier himself, the Canadiens bungled a shot at making themselves look good, turning a positive into a negative.

All this over a minor trade!