Share All sharing options for: Habs' Strongest Position of Depth Now Its Weakest 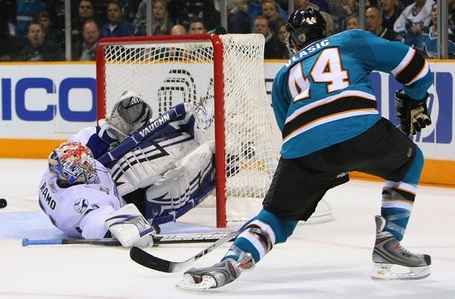 Why not trade the entire Canadiens team to Tampa for the Lightning's complete roster and get all this over with?

Canadiens GM Pierre Gauthier yesterday, dealt Hamilton goaltender Cedrick Desjardins to Tampa for Finnish stopper Karri Ramo, who is committed to the KHL for another season.

I've now lost count of how many former Canadiens players, prospects and management now don the lightning bolt, but rumours of Steve Yzerman and Guy Boucher secretly meeting over lunch with Youppi! in a Tampa restaurant ought to be lighting up the Hockey Buzz message boards by the time you read this.

No, I mean really, this is bordering on ridiculous here. Is there some kind of collective erection in Tamba for Habs components? What gives? It makes a fan think an organization might reconsider allowing another to hire away minor coaches and assistant GM's under contract, for fear it will return to pluck its dividends one by one.

But that is beside the besides. When what is essentially a minor near deal causes such rumbles, the general consensus is that the trade confounds.

And this deal by riddler Gauthier makes little sense in the short term, and provides no clues into the future.

I fail to follow the logic of acquiring a player (in this case, simply his rights) who cannot perform for the organization immediately in some capacity somewhere on the depth chart beginning now.

It now boasts, and that term is used loosly, Carey Price, who is not under contract, followed by three NHL vagabonds in Alex Auld, Sanford and now Ramo, while Mayer's challenge remains at the AHL level.

Now anyway it is sliced, no matter where fans sit on the great Price / Halak debate of last season, there is no denying that the Habs backbone in 2009-10 was their goaltending. They were the bucketmen of a sinking boat, bailing with both hands to keep the club afloat. For this coming season, it is to be hoped no leaks develop in the good ship, because what were then buckets are now achors and anvils.

Further wrapping the conundrum in a puzzler is the fact that Carey Price remains unsigned at the moment. That will change, and yesterday's trade, will not affect how he begins next season. 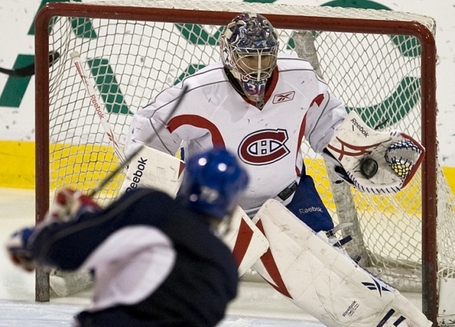 Now I like Carey Price, and I have not stopped believing he is the real deal, but the kid's got some weighty proving to do. His skeptic's anxieties are well known, let's just say. As time passes, I am beginning to see the old Jesus Price noose of a moniker in a different light, as it's likely been since the son of Mary and Joseph parted the seas, that any one group of people have placed so much faith in one person for their hopes.

Still, He walked on water and they crucified him too!

Price might be the least of present tense concerns in the bigger picture, and the rammifications are aplenty, looming somewhere down the line.

In Montreal, where nothing creates controversy and fear more than goaltender questions, the unanswered list is long and getting longer.

Should Price play up to his potential this coming season, but then get hurt, does the thin depth in goal not place a certain pressure to rush him back?

That could happen, and that's everyone's main worry now. It likely was before this trade, either way.

Can Alex Auld ably spell Price every fourth game in normal rotation, or even take the reigns during a prolonged injury?

I'm afraid of this answer!

When's the last time Sanford had a good sniff of NHL competiton? Would he be ready in a panic?

It's been awhile, but he did get a taste of AHL final four competition. I know, it doesn't make you feel any better either.

Was this trade a simple upgrade of player skill in a one for one deal, with a one year time lapse, and does Ramo have any interest in playing in the NHL?

It could be just that, only there is a likelyhood we never find out. If it pans out, kudos to Gauthier's smarts, but I don't like the risk.

Why would Ramo reconsider the NHL again if it doesn't offer him more properity than the KHL at this point? If couldn't crack Tampa in thin times, how does he remotely consider Montreal?

Maybe he loves strip clubs, but other than that, I don't see any Montreal allure for him.

Could it be that this trade was done to accentuate the progress and development of Robert Mayer?

It will do that regardless, but Mayer was not even the number one with ECHL Cincinnati last season.

Where is the next promising Canadiens goaltending propspect, just waiting for a chance to show his stuff at the NHL level?

Good question. No one has the answer.

Is the loss of Cedrick Desjardins potentially franchise crippling.

Hardly at all, but the ranking in a position's depth should never be compromised, especially after the strongest performer has been traded away.

Karri Ramo is one year away, at least, from helping the Canadiens in any way. By the time he arrives - if he does - the most urgent need for him might have passed.

More reads on this...What do I know?

Ya! The Habs Rule! - Habs give Price a birthday gift, trade closest rival

The Daily Hab-it - Beyond Comprehension