John Aiken: Pulled from the Crowd to be a Habs Goalie

Share All sharing options for: John Aiken: Pulled from the Crowd to be a Habs Goalie 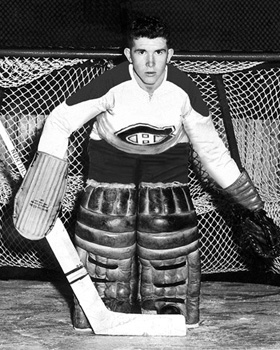 Seated in the second row with his father, Jud, the twenty-six-year-old Terrier alumni hurried to the locker room to replace the injured Jacques Plante, arguably the greatest goalie of all time.

Aiken thus became not only the first of 51 Boston University athletes to play in the NHL, but also hockey’s Walter Mitty - a spectator putting on skates and goaltender’s pads to face the potent offense of the 1958 Boston Bruins.

"I’ve bumped into so many people who claim they were there that night," says the retired mathematician at his home in Billerica, Massachusetts.

"And each one says the same thing: ‘Johnny Aiken? Hey, I remember you. I was at the Garden the night you made an ass of yourself. ’"

Aiken skated a curious route to his date with destiny that March night.

In 1958, NHL teams carried but one goaltender, and hired a spare to mind the other net during practices and attend home games as a replacement if either team’s goalie were injured and unable to continue. The Bruins paid Aiken $25 a game to be at the ready.

Which he was, almost, when early in the second period, Montreal’s Doug Harvey, the NHL’s best defenseman, cross-checked Bruin Vic Stasiuk in front of the goal, driving him heavily into Plante, who cracked his skull and back on the crossbar and was carried from the ice with what the Boston Globe reported as a "brain concussion and possible spinal injury."

"Then it hit me," Aiken recalls. "I didn’t have my equipment. The Bruins practiced at both the Garden and the Boston Arena. I also was playing semipro with the Arlington Arcadians, so depending on my schedule, I sometimes kept my equipment in my car. While I headed for the dressing room, my father ran out of the Garden, down Causeway Street, and onto Nashua, where we had parked. And he sprinted back carrying all the heavy pads and gear." 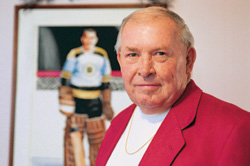 Aiken looked around the locker room and saw the Hockey Hall of Fame come to life.

Maurice and Henri Richard. Jean Beliveau. Doug Harvey. Bernie "Boom Boom" Geoffrion. Dickie Moore. Tom Johnson. Coach Toe Blake was hollering at his first-place Flying Frenchmen in French, of course. "I didn’t understand the words," Aiken says with a laugh, "but I certainly got the idea."

When his equipment arrived, Aiken dressed hurriedly. "I don’t recall anyone talking to me," he says. "Everyone was concerned about Plante, who was waiting for the ambulance."

When the Canadiens marched single-file down the runway to the Garden ice to resume play, leading the parade was John Aiken.

"When I reached the gate and looked up, it felt unreal," Aiken recalls. "I saw that sellout crowd looking down, buzzing and yelling. I couldn’t breathe. And when I hit the ice, I asked myself, what am I doing here? I was nervous, too nervous."

Bellowing from the upper balcony, a gallery god welcomed the rookie of all rookies: "You’ll be sorry!"

The Canadiens peppered Aiken with warmup shots, and he remembers barely feeling the pucks bouncing off him.

And, about to get a lot number.

As the teams skated off at intermission, Montreal defenseman Tom Johnson placed an encouraging glove on Aiken’s shoulder. "Hang in there," he said. "You’ll be okay."
And when he returned for the third period, he was, settling down to make eight saves while allowing a single goal in the 7-3 Bruins victory.

At the final bell, a number of Habs ruffled his hair and swatted his pads in appreciation of his game effort.

In his thirty-three-minute, forty-five-second NHL career, Aiken made twelve saves and permitted six goals. "A .667 save percentage is pretty good for a shooter, but not for a goaltender," says Aiken. "So I was down in the dumps afterwards, the last guy out of the locker room. My dad was waiting, and he was very sensitive about everything. It’s only a few miles from the Garden to Arlington, but it was a long ride home."

Not long after Aiken’s NHL debut -- and finale -- he received a letter from Canadiens general manager Frank Selke. It contained a check for $100 (Canadian, then worth $107 u.s.) and an invitation to Aiken and his wife for an all-expense-paid trip to Montreal.

"No matter what the results were," Selke wrote graciously, "we admired your courage and keen desire to help us win."

"We never made the trip," Aiken says, "and unfortunately I cashed the check. It would have been a nice keepsake. But I kept the letter, my only memento from my experience of a lifetime."

Aiken began as a star goalie for Arlington Massachusetts High School’s 1949 state hockey champions. Aiken was appointed to West Point in 1950. Army coach Jack Riley rated him as the Cadets’ best goalie ever, and the sophomore showed why one night when he made "fifty or sixty" saves during a 4-0 loss to a BU sextet headed for the NCAA tourney.

When BU coach Harry Cleverly congratulated him on his performance, Aiken confided that he would probably be leaving West Point to marry his high school sweetheart, which was against cadet rules.

If he did, Cleverly said, he’d be welcome at BU.

Aiken became a Terrier that fall. But he had to sit out the standard year required of transferring athletes by the NCAA.

That’s when the Bruins stepped in with their job offer. He continued with Boston even after becoming eligible to guard BU’s nets as a senior. He was skating on thin ice around NCAA rules, "but no coaches complained," he recalls, adding with a grin, "perhaps because BU was so bad anyway."

Terrier hockey had plunged to its lowest ebb the year Aiken sat out, after an academic sweep decimated both the varsity and frosh sextets. Overnight, BU went from three Frozen Four appearances in four years to 4-15-1 in the 1953-54 season.

After Aiken reported for BU duty the next fall, the Terriers fared even worse, winning only four (including one over his old Army mates), while losing nineteen.

Aiken survived the avalanche of pucks that season, but left school four courses short of graduation. Some of his West Point courses were not accepted toward his major, and when an opportunity came along to work with the Air Force as a civilian mathematician and engineer, he took it, and remained until retiring in 1987 as chief of software development for air defense systems at Hanscom Air Force Base in Bedford, Massachusetts.

"I had intended to go back and finish up the BU degree, but between the job, the Bruins, and starting a family, I never got to it," says Aiken, who continued as the Bruins’ spare netminder through the mid-sixties, when NHL teams went to a two-goalie system.