The Key is for Canadiens to be Potentially Better, Younger, and More Efficient

Share All sharing options for: The Key is for Canadiens to be Potentially Better, Younger, and More Efficient 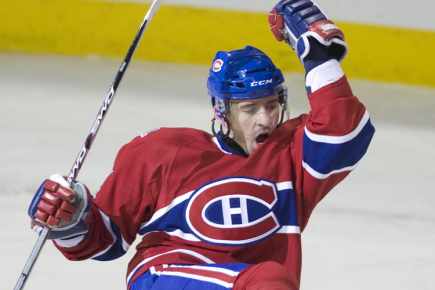 Since the trading of goalie Jaroslav Halak to St. Louis and the signing of Alex Auld to act as Carey Price's backup for the 2010-11, there has been much consternation among Habs fans that the team has simply not been improved over the summer. For those of you who feel this way, I have been among you, thinking along similar lines as I see it.

For a few weeks now, I must admit, that I did not "get it" all the while endorsing the Halak trade for general team improvement purposes.

As I saw it, dealing Halak was both understood and neccessary in order to retain Tomas Plekanec, but after that, Pierre Gauthier lost me somewhat, and it has to do with one signed contract since (Pouliot), two that remain unsigned (Price and Lapierre), and one player that is being allowed to get away (Moore).

What has some thinkers itching their noggins, is the timing of the Halak trade, in regards to Price remaining unsigned. It has been read in some parts that by dealing Halak before signing Price, negotiation leverage was lost, and that now, the Canadiens starter has the GM backed into a corner.

While that in part may be fact, there was no way for a contrary scenario to unfold.

Imagine now, if Gauthier, prior to trading Halak, approached Price and his agent, low-balling an offer in light of Halak's perceived number one status. Following the signing, Halak is moved, and the new number one is then being paid below a starters rate. Price would have rightfully seethed and felt duped!

Such would simply have been nogotiating in bad faith, and only a GM interested in tarnishing his own reputation would act in such a manner.

Price may hold some extra leverage as things unfold, but it can be seen that the Canadiens all along have been planning to reward him based on potential upside.

That all said, I thought the numbers allotted to forward Benoit Pouliot were a tad generous, considering his slide in the final 35 games. It is no unshared opinion that Pouliot must prove his worth all over again in 2010-11, although coming off his best season in his young career. Perhaps I was curveballed by the mixed message that Pouliot was the lone Hab player not tendered a qualifying offer by the deadline. The half million per annun raise, in that light, was surprising.

Now I could be totally wrong here, but Maxim Lapierre should have been one of the easier resignings for the Canadiens, but he likely got a whiff of Pouliot's raise and thought "Whoa!"

Like Pouliot, Lapierre's season fell below expectations, but unlike him, he had a solid playoff and surely feels he is worth similar numbers.

Dominic Moore is a player I respected before he became a Canadien last March, and I learned to truly appreciate him much more as he came aboard to complement the Canadiens depth in the post season. Moore will never be an obvious game changer, but he has the talent and work ethic to perfectly fulfill the third line center role.

I could not conceive that the Canadiens, after dealing a second round pick to acquire Moore, would simply let him walk in free agency. Being that he has enough attributes to have fetched a second rounder in trade, would it not be best for Montreal to have held onto his rights for another season?

His experience, valuable as it was, has now been replaced by less experience, in the likes of Lars Eller and Dustin Boyd. That could all work out for the better in due time, but in my eye, having Moore in place was a buffer of sorts should things not go as planned. Moore, come the 2011 trade deadline, might have returned that valuable second round pick.

Tallied up thus far, the Canadiens off season moves consist of Price replacing Halak as a starter, with Auld slipping into the backup role, and Eller and Boyd filling in where Moore and Glen Metropolit were positioned. One progressional move, on defense, has P.K. Subban replacing Marc-Andre Bergeron in the top six, as well as on the vaunted Habs powerplay.

None of this is considered earth shattering in Montreal, of course, where subtlety never registers on the Richter. Each move, has been designated to either come cheaper or make the club younger, on the surface.

But what it is truly all about, is efficiency and economics.

Auld is cheaper than what Price would have cost, had Halak been resigned.

Boyd may well match Moore's number at a third of the cost.

Eller is the best Canadiens prospect at center since Plekanec, and he will cost the team half of Metropolit's salary in estimation, while being ten years younger.

One thing smartly noted by GM Gauthier in recent weeks, was that the last two Cup winners - Pittsburgh and Chicago - benefitted from bargain performances by players on the cheap. In other words, players of smaller salaries were great contributors, attesting in both cases to wickedly good depth, among other things.

Of course, the Canadiens have not had the luxury of maxing out performances from players on entry level contracts the likes of Jonathan Toews, Patrick Kane, Sidney Crosby, Evgeny Malkin or Jordan Staal in recent years, but in order to keep pace they still must attempt to find players who can produce at a ratio that defies their salaries.

Should Eller and Boyd, both smart gambles, achieve this, Gauthier will look genial.

It's all about the bang for the buck, an unheralded common thread among recent Cup winners that Gauthier plainly admitted he has tapped onto.

With so much of the Canadiens salary cap committed to players earning large salaries over the coming seasons, the one and only thing that can put them over is to get a maximum return on players with cheaper salaries.

In that light, recent moves are more understandable, and the organizational plan much more feasible and comprehensible.