The Day Bob Probert Knocked at my Door

Share All sharing options for: The Day Bob Probert Knocked at my Door 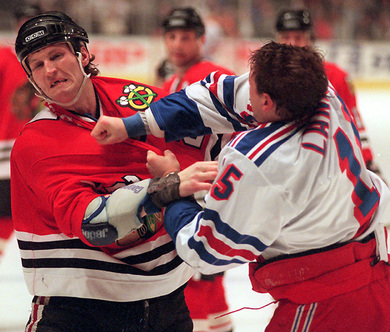 This article originally appeared at EOTP on March 25, 2007, and it is written by a friend of mine named Thom Racine. Thom is a police constable in Cornwall and has been very prominent in the local athletic community for well over the 20 years I have known him. You name it - he's done it!: everything from hosting a local sports card show on cable TV for over a decade to organizing high scholl hockey tourneys to being an avid sports memorabilia collector. Thom's father, was "Moe the Toe" Racine, legendary punter and placekicker with the CFL Ottawa Rough Riders. Through a vast aray of friends and acquaintences, Thom meets some pretty cool sports personalities, and one of his favorite encounters was with hockey legend Bob Probert. not long after Bob paid Thom a visit, I asked if I would run this article. With yesterday's shocking tragedy, it is apt to run this article once more. RIP Probert! You were one of a kind!

Much has been written about Bob Probert, and not all of it good. His very public private life makes him less of an enigma, if he ever was one at all. Because Probert is so revered, we tend see him differently. We rehearse what we would say to them if we ever got a chance, and if and when it happens, we forget everything and stand in a fog. Players are used to it, in fact are likely embarrassed - for us.

The obvious topic of discussion when you meet Probert would be to go over some of his bouts - Crowder, Domi, Coxe, McSorley or Semenko.

What one tends to forget is that along with 3,300 penalty minutes, are close to 400 career points, including 163 goals with the Red Wings and Blackhawks. Probert also added 48 playoff points in 81 games along the way.

In a way it may mean more to him one day than any of his epic battles. Make no mistake he knows what people associate him with and I am sure he must catch himself day dreaming from time to time as he hear's the crowd at the Joe rise to their feet in unison as he would get set to square off.

I was in that crowd once, and experienced the sight first hand. That same Joe crowd let him know again, during his introduction on Steve Yzerman's retirement night this past January, just how much they love him. After all he has put himself through on and off the ice, he smiled, saying the ovation made him feel pretty good.

The topic I wanted to discuss with Probert took place on February 13th, 1999.

That night, Probert was not the usual suspect to accomplish the feat of scoring the last ever goal at Maple Leaf Gardens. On November 12th, 1931 when the Gardens held it's first game the Hawks won 2-1. The Hawks Harold "Mush" Marsh scored the first ever goal in the Gardens. As the Hawks had opened the Gardens, it was no accident they were invited back to close the hockey shrine.They won again, this time by a 6-2 score.

Bob takes the story from here.

"I scored with about ten minutes to go in the third period. There was lots of time left to play, so I didn't think about it too much. Guys were keeping their goal pucks that night, and at the bench the trainer would tape the puck and put it away. Then with about four minutes to go I thought about it and figured I might have a chance, and how cool would it be."

"Then the ref called a penalty on us, there was about a minute and a half left in the game. I remember thinking they don't want me to be the guy. The Leafs did everything but score. I thought they might come and take the puck to the Hall of Fame but I still have it, and it's for my son one day. It could have been anyone that night but I'm glad it's me.I have the stick too" he added.

Probert's five minute autograph session had turned into an hour in my home. This notorious legend was as much a little boy as I am every time I open the door to my sports room. He talked about playing in Anaheim's home opener and was surprised when I pulled out a ticket stub from that very game.

He looked at cards he had collected as a kid and, like all of us who collected, remembered them and that gum that came with them. He found a few pucks from Windsor area teams that he either played for, or knew guys that did.

Lately Probert has been doing some speaking engagements about his career, and the demons he has faced.

He plays in old timers games and hopes to play here in town one day. He even took a couple of jabs at the heavy bag in the garage reminding me that it's still ingrained in his psyche.

As he walked away, I could not help but watch him head up the street where five neighborhood kids were exercising their Canadian right to play road hockey. As he approached the game he leaned towards his right, I am sure he said something as they paused ever so briefly to let him walk through. None of them had any idea who had just walked by and that was the best part. I smiled because I knew. It really was one of those great Canadian hockey moments.

Bob, your legion of fans hope that you continue to have the courage to face every day, and know that you made my day when you knocked on my door.

Thanks again for the puck, Thom.