One Year From The Great Gainey Purge of '09, Who Would You Want Back?

Share All sharing options for: One Year From The Great Gainey Purge of '09, Who Would You Want Back? 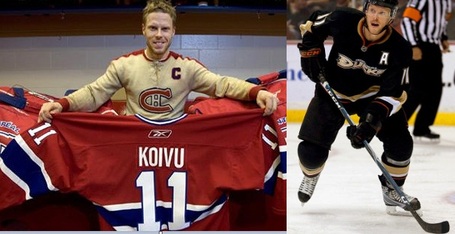 It's a about a year and change since the Great Gainey Purge of '09, wherein the former Habs GM cut loose a dozen or so unrestricted free agents and went on a spending binge unseen in Canadiens history.

The net result was a deceptive one - a meandering regular season eighth place finish followed by a surprise playoff run deeper than any in the last 16 seasons.

Still, there remain some doubters in Skeptic City that the Canadiens today are an overall improved club from the one Gainey trashcanned twelve months ago. Perhaps because what was mentioned above hasn't been all in terms of turnover, as Gainey and new GM Pierre Gauthier continued to recycle the team. Of 34 players who dressed for Montreal in the 2008-09 season, only 11 remain today

Talk about a shakeup, considering only seven or eight of those eleven players are pencilled into the starting lineup on a regular basis for this coming. A look at the dearly departed since the 2008-09 season can be found here.

I spent a good slice of last season bitching about my team's lost identity, and I wasn't alone. Admittedly, I didn't like the moves at first because they were so wholesale. I also agonized over loss of potential tradeable assets. Individually, I understood the reasoning behind most of the moves, but one or two still really pierced the heart.

Looking at it now, with one year's perspective in the rear view, it's hard to argue that Gainey was wrong, individually, or across the board. He replaced an eighth place team by an eighth place team - one that played an additional 15 playoff games. And playoffs is where we all want improvement, right?

Today, of the 13 players shown the trap door, only six remain viable NHLers.

Of those six, and considering salary cap contraints, would you wish any of the group back, versus what it would cost in cash terms to the upcoming season's lineup?

For a look at what each will be earning in 2010-11, click on the individual links for Koivu, Kovalev, Tanguay, Komisarek, Bouillon and Higgins. For the Habs cap structure, the Capgeek list for the team can be found here.

Personally - and you all know how much I love Koivu - my vote would go having Komisarek back rather than the Hamrlik contract at this point. Seeing the defensemen signed beyond this season is a big concern for me. Bouillon, as a sixth defender, was also given consideration.

As for Saku, could the Canadiens have brought him back into the fold at this point for less than what Anaheim are willing to pay him?

Kovalev's contract, based on his first Ottawa Senators season, is like charging a bald headed man $25 bucks for a haircut, nipping his ears with the scissors in the process.

Higgins seems no longer to be the Higgins we knew, a risk eh?

Tanguay, for that money, has a great future behind him.

Do you beg to differ, or would you say Gainey nailed it, in the case of a dozen player scenarios?