The Habs on the Silver Screen - Part Two: Fictional Scenes

Share All sharing options for: The Habs on the Silver Screen - Part Two: Fictional Scenes 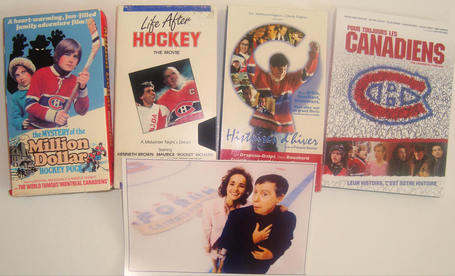 Generally speaking, fans mainly become attached to the Montreal Canadiens and their players during childhood, a time when imagination is fertile. If you played hockey as a kid, you likely pretended you were your favourite Canadiens player: a forward, a defenseman or goaltender. Personally, I was Guy Lafleur when playing hockey in the street or the outdoor rink and I wore number 10 for my years in organized hockey. Perhaps you simply dreamt of attending a Canadiens game in person, with the possible thrill of meeting your hero.

Some filmmakers have put some of these fantasies in films, the latest being Pour toujours les Canadiens which was released in theatres last December especially for the Habs centennial and is now available on dvd.

Thus, Canadiens related fiction scenes are mostly about fans emotions. The scenes presented here can be happy, humourous, sad or magical. Maybe they will bring back the kid in you. Let’s go to the movies...

Just before the closing of the Montreal Forum in 1996, Radio-Canada presented a docu-drama called Le Fantôme du Forum (The Forum Phantom). This scene presents the main character desperately wanting to be at the Forum when Maurice Richard scores his historic 500th goal on October 19th, 1957. He has a mishap along the way, and it becomes his destiny to become one of the Forum’s ghosts.

In the film Histoires D’Hiver (Winter Stories), a kid and his friend escape to Montreal by bus to realize a dream of attending a Canadiens game and perhaps meeting Henri Richard. Things didn’t go as hoped, as the kid recalls, but it was still an unforgettable experience growing up.

I had to include a clip related to Jean Beliveau. Taken from Pour Toujours Les Canadiens, in which Beliveau plays a small role, this scene shows a father explaining to his son that the former number 4 was not only a great player but also a great man.

This next scene is from the 1975 family movie The Mystery of the Million Dollar Hockey Puck. After having thwarted a plot to smuggle diamonds by using the Habs, the two young orphan heroes are surrounded by a group of grateful players (Bob, Gainey, Serge Savard, Murray Wilson, Pierre Bouchard and Ron Andruff).

From the 1989 movie, Life after Hockey, this scene presents the movie’s main character, Rink Rat Brown, attending a Canadiens game in the seventies and seeing Guy Lafleur score and imagining running into him later in the night and getting a lesson in courage. (Ironically, the goal shown is actually Lafleur’s last as a Hab in 1984.)

Again from Le Fantôme du Forum, this clip shows Johnny, the Forum ghost, being transported to the new forum along with all the other ghosts.

Here is a montage of a few comic scenes related to the Canadiens from some of Les Boys movies, namely of Fern, a garage league goalie who reveres Canadiens legends such as The Rocket and is a living hockey encyclopedia, knowing all the facts and the stats. But his interlocutors are often annoyed by his stories. The acute Habs observer might notice some factual errors in his statements...

The next three scenes are from Pour toujours les Canadiens. In this first one, old Zamboni driver Gerry at the Bell Centre, sees the Habs score and reminisces about past crowd eruptions.

This next fictional scene actually happens quite often in real life: Canadiens players visiting sick kids at the Montreal General Hospital. In this scene, Saku Koivu, who’s triumph over cancer has been well documented, and other Habs players from 2008-09 make an emotional visit to some happy children including one of the movie's main characters, Daniel.

Finally, this last clip is what Canadiens players and fans dream about most - getting to touch hockey’s Holy Grail, the Stanley Cup.