The Habs on the Silver Screen - Part One: Re-enactments

Share All sharing options for: The Habs on the Silver Screen - Part One: Re-enactments 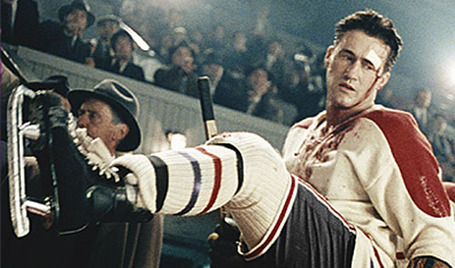 From the moment they were established, the Montreal Canadiens were not simply a sports team, they were also ingrained into popular culture.

The team’s eventful history and its significance to so many people has been documented through an incredible amount of written material. But the art of filmmaking has also been used to portray history and emotions related to the Habs.

Since summer is the off-season for on-ice real life drama and perhaps a time where hockey fans will go and enjoy a seasonal blockbuster movie, I thought it is an opportune time to present different acted fiction and documentary scenes related to the Canadiens, in a two-part series published in the next two days.

This first post presents re-enactments scenes while the second part which will be published tomorrow, will focus on Canadiens fictional scenes.

Canadiens related re-enactment scenes mostly portray events from the first fifty years of the team’s history probably because, for a large part, it was an era before they were captured on film or television.

Some of my personal favorites are presented here in a chronological order of the time the action occurs. I'm sure they are more or less accurate re-enactments and historians might want to comment on that but I hope everybody will enjoy them for their entertainment value. Take out the popcorn if you want and let's go to the movies...

Presented as part of Hockey: A Peoples History documentary, this first clip shows the team’s beginnings in the 1909-10 season.

Again from Hockey: A Peoples History, this scene illustrates the 1920's and 30's era rivalry between French and English teams in Montreal, the Canadiens and the Maroons.

This clip comes from a documentary presented on Historia, the French language History channel. It is about Howie Morenz’s wake at the Forum after his death in 1937.

No other Canadiens player has generated as much attention in documentaries and films than Maurice The Rocket Richard. The scenes I prefer are from the Rocket film in which actor Roy Dupuis plays the lead character. The first of three clips from this movie relates the Rocket’s five goal performance in the 1944 playoffs against the Toronto Maple Leafs as the Habs were on their way to their first Stanley cup in 13 years.

The third clip from the Maurice Richard movie is a scene after the 1953 Cup win and involves former coach Dick Irvin.

Finally, to finish off this first part article is the Canadian Heritage Foundation vignette about Jacques Plante and his famous decision to wear a mask during a hockey game in 1959.