TV broadcast highlights from the 1971 final between Canadiens and Hawks

Share All sharing options for: TV broadcast highlights from the 1971 final between Canadiens and Hawks 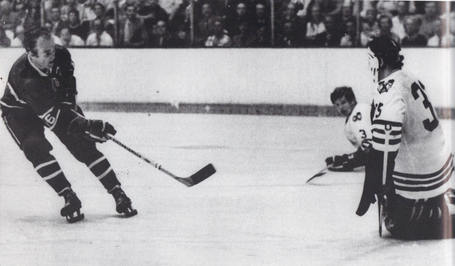 Since I’ve connected with other Habs fans through the Internet over ten years ago, I’ve seen many who wished they could see complete games or highlights of the 1971 Stanley Cup finals between the Canadiens and the Chicago Black Hawks.

In the last two years, many readers of Eyes On The Prize have been lamenting the fact that such games were not part of the great Montreal Canadiens games DVD set. Since then, it has been explained that the CBC did not preserve complete recordings of these games. As for the American CBS Network who broadcast Game 7, it is unlikely that they have preserved a recorded copy.

Still, there are highlights from TV broadcasts that exist of the 1971 final. The most precious ones I’ve found are CBC highlights of Game 7 that were presented on a 1989 video called Great Plays from Great Games produced by Molstar. 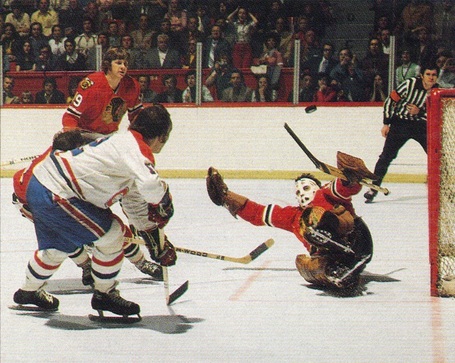 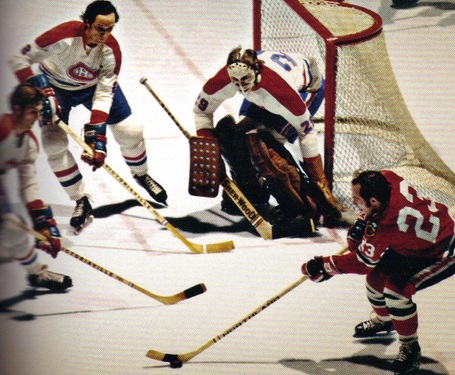 As a Habs' fan, I’m always thrilled to watch that exciting short clip which represents the culmination of a magical playoff year for the Canadiens. That 17th Stanley Cup win for the Canadiens has been discussed at length in various books, publications and on the Internet. One online resource that is always recommended is the Habs official history website, and we’ve also presented a post here months ago about the Canadiens tremendous upset of the Bruins in the opening round, that included a Game 2 comeback for the ages.

To many members of the Canadiens and to the fans who were old enough to witness it, this triumph ranks as a most special one since the team was not favoured to win that season and had to overcome much adversity and obtacles to achieve it. Broadcaster Dick Irvin, who had seen every Canadiens playoff since 1940, has called 1971 his most memorable playoffs. It was a storybook ending not only for the Canadiens but also for the great Jean Beliveau, who had announced it would be his last season. Having become the third player to reach the 500 goal plateau earlier in the year, Beliveau closed out his career by hoisting the Stanley cup, for a tenth time and fifth as captain, a Canadiens record. 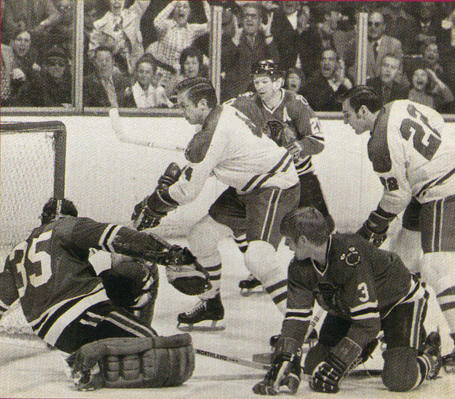 For the Blackhawks and their fans, the loss in '71 is probably the most heartbreaking one in team history. And while the Blackhawks took a 2-0 lead in games at home in this year's Stanley Cup final against the Philadelphia Flyers, the Chicago media recalled the spectre of 1971 when the team had achieved the same against the Canadiens. And, after five contests in this year''s final, the pattern of game wins is coincidentally the same as the '71 finals. The Blackhawks and their fans are hoping for a better result this year. 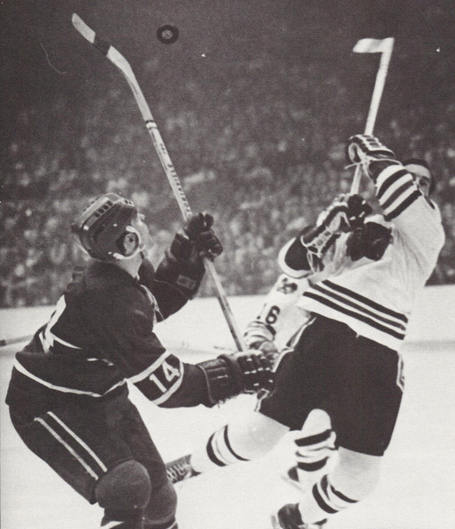 I’m sure there are many fans today who haven’t seen the 1971 CBC TV broadcast highlights of Game 7. They are rarely if ever shown on television and the 1989 video Great Plays from Great Games was probably only on the market for a couple of years.

With that in mind, I am happy to share it with readers here. I have lengthened those highlight clips by splicing additional seconds of video I had collected from other tapes. With voice over from Ron MacLean of Hockey Night in Canada, the clip shows all five goals scored in Game 7 from May 18,1971, with four of them being called by the great Danny Gallivan over original crowd reaction. 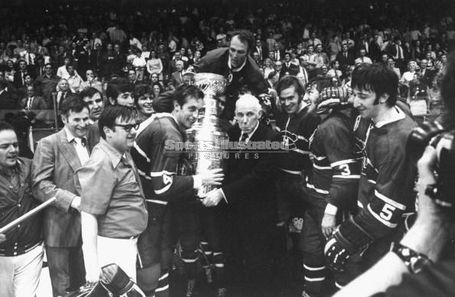 The highlights include the famous goal Jacques Lemaire scored on Tony Esposito on a slapshot from outside the blueline and the game tying and game winning goals by Henri Richard. You can also hear Gallivan’s call of the last few seconds of the game and see part of the post game celebrations where, at the end, some players are about to lift coach Al MacNeil onto their shoulders. Later, the video shows Canadiens captain Beliveau surrounded by his teammates as he accepts the Stanley Cup from NHL President Clarence Campbell and rookie goaltender Ken Dryden holding the Conn Smythe trophy as playoff MVP while being interviewed by Ward Cornell of Hockey Night in Canada. Here it is.

Of course, there are many highlights missing from this clip, such as great saves by the goaltenders and close calls when pucks hit posts or crossbars. These can be seen on a Stanley Cup film narrated by Dan Kelly that also includes locker room scenes and footage of the Stanley Cup parade held in Montreal the following day before half a million plus fans.

I have also found some TV highlights of Game 2 from a Chicago broadcast which shows some of the Blackhawks goals in the 5-3 win.

For years, I’ve been wishing that a television station or production company would do a documentary about the Canadiens 1971 playoff year, using all available TV broadcast footage of games. Unfortunately, this had not happened and this is the closest reproduction imaginable from what exists today. 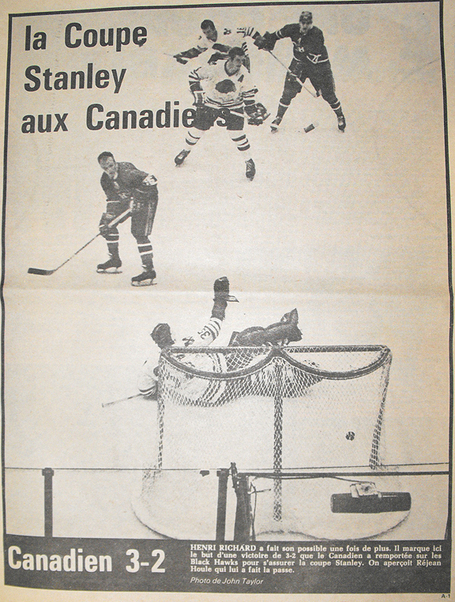 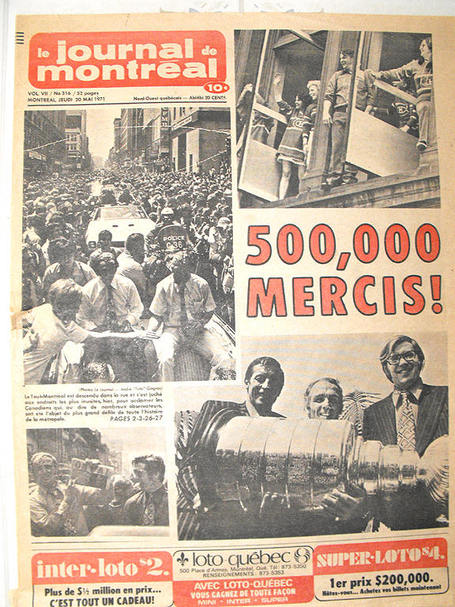 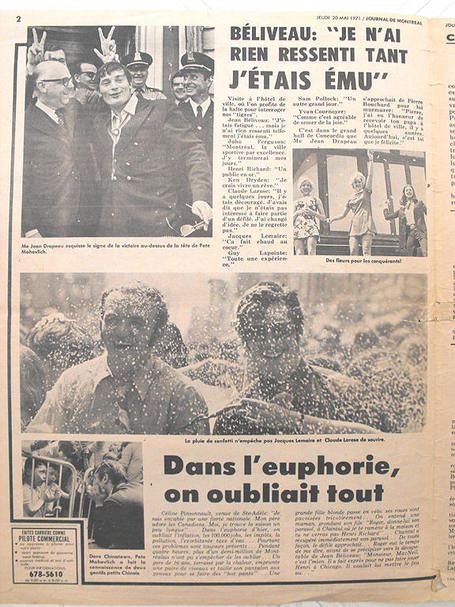