The very first thing one notices when meeting Canadiens 2009 first round draft choice Louis Leblanc is his smarts. The kid from Pointe - Claire, Quebec is no mere unlettered hockey jock spewing cliches randomly to a set series of questions. In fact, the questions often brought to Leblanc are pointed, difficult and complicated ones, and he handles them with poise beyond his years. He possesses a surprising maturity for someone whose existence had gone from a practical anonymity one moment to the pressure vise of a Habs' top pick in one day.

I met Leblanc briefly at the 2009 draft at the Bell Centre and it is a moment I will likely never forget. He was surrounded by denizens of the Montreal media, a good 40 strong, at his feet, mics in hand and questions in the air. The 18 year old had to be intimidated and in awe. A savvy teen, he understood what to expect and dealt with it with a curious command of presence.

The actual deer in the headlights that day was your truly, the hockey blogger turned inept reporter for an evening. I was definitely in awe of the entire scene - a Habs first rounder before me, Bertrand Raymond to my left, familiar media faces all around, a recorder in my hand that I did not realize would fail me. I did not impose myself as I waited out most questions, I just stood there, soaking it in, trying to come up with one of my own as I took in the whole scene. 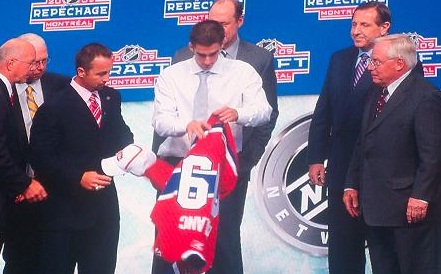 Leblanc was impressive, his answers displaying an assurance that he knew what he wanted and how he planned to go about getting it. Cast in the limelight in the virtual lion's den, the young man repeatledly found different ways to state that at that moment his education took prescedence and that his hockey career would be evaluated one season at a time.

When one rather frothing question came at him, deigning him worthy of a Habs savior, he kindly but abruptly swept it off by mentioning that at that very moment he was nothing more than a hockey player of promise with no guatantees and tons of work ahead of him. He alluded to his size and the need to fill out, before he could become an NHLer in body. Savior type questions were put to bed in one succinct reply.

The crowd of fourty had dispersed to a group of little more than a half dozen when it came my turn to ask something of Leblanc. Trouble was, I had no question at all in mind. What happened in hindsight, I think, is that Leblanc noticed that I had yet to ask anything of him, and he simply turned, directing himself toward me in order to allow me my shot. Oddly, I recall that instant as though it happened in slow motion. Nervous as heck, it was almost as if I could feel the faces of the other seven or so journalists turn my way before I had uttered a word. My brain scrambling, the question came out in french, but it was less a query and more of an observation. I felt all the inexperience in myself as I noted something particular to him, in the form of a question. 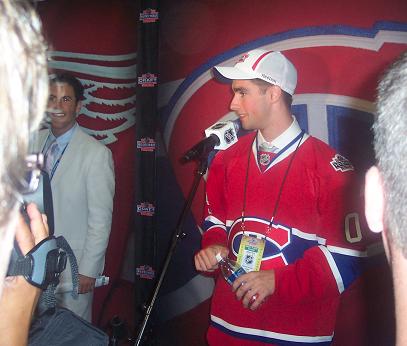 In essense, I pointed out to the man of the moment that yesterday he was simply a kid, a local with perhaps a big dream of being drafted by the Canadiens. Today, he had accomplished that much, and there he stood now, likely the envy of every Quebec born hockey player with a dream. I awkwardly noted that he must be well placed today, to know what that felt like.

Leblanc flinched a little, but reacted by thanking me. Not knowing exactly what came out of my mouth, that was a surprise, but the kid was being respectful. As he began answering, Raymond standing next to me, scribbled madly into his notepad. The question and answer appeared the next day in his Rue Frontenac column.

What came back from Leblanc, was that yes, he was aware of what it meant and the obligations that came with it. He was proud, but that this was but one day in a long and unfinished work in progress. He did go cliche for a sec, noting the unforgettable moment, the dream come true, but that again, it all reminded him of how much work there was left to do.

As he finished replying, he gave a little nod my way before moving on to field the next question.

What I took from that whole media scrum, Leblanc's first, was not that he was well rehearsed, but that he knew with absolute conviction, where he was headed and how he hoped to go about it. Whenever questions pinned him for a more pointed look down the road, he always stepped back to say that his career progression would be evaluated on an annual basis.

Which brings us to today. 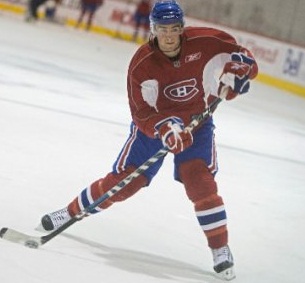 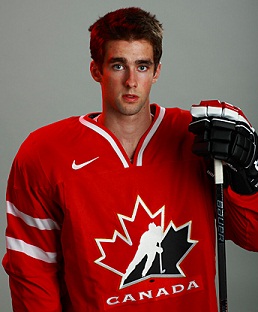 No one will qualify Leblanc's first campaign with Harvard as a disappointment, but it is clear from present rumours and rumblings that it did not go as planned for the youngster. In his NCAA season, he tallied a very respectable 11 goals and 12 assists in 31 contests, winning rookie of the year along the way.

Where the snag occurred, was the Leblanc endured an injury, missing games where in university hockey half the number of matches are played as opposed to the Quebec junior league. University hockey does offer double the practice time, but also on Leblanc's 2009-10 agenda was a trip to the World Junior Championship, which was assuredly compromised by the injury. Games are precious in Leblanc's growth and development at this time, and it being assessed in the player's camp whether or not the setback was impactful over the long haul.

Leblanc and other prospects spent this past week at the Canadiens development camp in Brossard. The annual four day June event is designed to allow the Montreal organization to better know and understand the progression of their most prized young assets. Aside from the usual drills, there are strength tests and exercises, specific clinics and one on one time with players. It gives both sides a more concrete idea of where everything is at and what remains to be done.

During it all, Leblanc has been the most sought after and the most talked player about by far. This weekend, his Quebec junior rights were traded a second time, from Chicoutimi to the Montreal Juniors, with the spoken notion that it could assist a transition in schooling from Harvard to McGill. 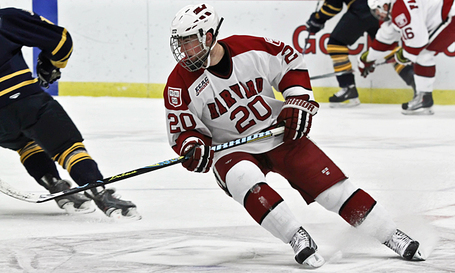 In all of it, it is said the Canadiens are taking a hands off approach in regards to Leblanc's impending decisions, but you can bet it is being discussed between the parties, each wanting to know what the other is thinking.

For Leblanc, not making the World Juniors a second time around would not bode well for his growth as a player. The best juniors need the WJC challenge, the push that elevates their game on the biggest stage available to them. There is no tournament like it for teaching and pushing players to achieve, and Leblanc know it is the next step for him to make. For that, he needs to play games, and lots of them, at the highest competitive level. All the while, he is maintaining that his education is important to him, but Harvard is a door that will not slam shut on him in the manner that a hockey career can bypass him with a few misteps.

There is alot riding on Louis Leblanc at the moment, for himself and his career, for the Montreal Canadiens, and for junior hockey players in Quebec.

More than any other Canadian junior league, QMJHL prospects eye the American collegiate and university hockey ranks as an upgrade in many ways. The teaching and practice time are two aspects in consideration, the other is the fallback education provides, should players be overlooked come draft time.

At this time, Leblanc needs to maximize this growth stage by playing as many competitive games as he can. The Canadiens wish to see Leblanc meet the challenge. They will never admit, but he's pencilled into their plans two seasons away. For the Quebec league, regaining a markee player and Habs prospect, tilts the development argument back their way. For them, much is riding on Leblanc's choice.

It is not coincidental that Leblanc's rights were dealt to the Montreal Juniors at this time. It was likely his only QMJHL option that he would consider leaving Harvard for. That it has all come into play while he is at the Canadiens development camp is more than simply curious.

As a player with current university standing, Leblanc is not allowed to have an agent. Technically, that does not mean he is allowed to listen to advice that will counsel and be informative to him. In recent days, it has come to light that there has possibly been a split with former advisors Philippe Lecavalier and Kent Hughes, and that Leblanc has now turned to reknown player agent Pat Brisson for guidance with his next steps. The most recent word from the player is that his decision will not be influenced by anyone having anything to gain from what he decides, not an agent, a junior team, or the Canadiens themselves. It is a wise and sane method for a player being tugged at from all sides.

There is always the option that Leblanc could sign a pro contract and be assigned to the Hamilton Bulldogs. That option gains a little thread when considering that Canadiens second round pick Danny Kristo, a former USHL teammates of Leblanc's with the Omaha Lancers could join him there. It is a scenario not without precedent for the Canadiens, who chose the same path for forward Max Pacioretty two seasons ago.

Such an unfolding could be an interesting proposition for the Canadiens to pursue. A line of Leblanc, Kristo and Pacioretty in Hamilton, coached by Guy Boucher, should he turn down the job offer from the Columbus Blue Jackets.

Likely the next domino to fall that could have an influence on the choices he has before him will be the Canadiens rookie camp later this summer. That should present a truer test of where he is at progression wise, and decision may be taken from there.

Until then, we are left to wait and watch. One thing is certain for the mature Leblanc, with all the developments behind the scenes and around him, it appears as though he has placed emphasis on his hockey career over the summer and is examining his options carefully.

He will make the right move, and informed choice in due time.