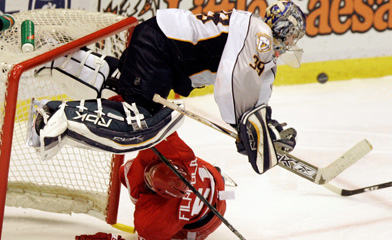 If the Canadiens can manage to sign recently acquired both goalie Dan Ellis and center Dustin Boyd within the next two days, the dealing of Sergei Kostitsyn to Nashville will look very good on Pierre Gauthier's resume. More explicitly, the trade could set up some financial wiggle room, options wise, before the July 1 free agent jig.

Call the trade one of the low risk, high reward variety, as even the worst of possible scenarios for Montreal is palpable. If perchance Montreal can sign neither of Ellis or Boyd and Kostitsyn goes on to become a decent player, it should still be remembered that he had cooked his goose in Montreal to the point where it was thought his market value was lower than a snake's belly in a wagon rut.

As the deal involves future considerations, Kostitsyn is the lone player whose rights will remain with the team he has been traded to in two days time. Unless Sergei bolts to the KHL, a Nashville signing returns the Canadiens a seventh round pick, practically the rank he was drafted at in 2005. At this time, all that is known of the future consideration concessions, is that the Canadiens would also be sending picks the Predators' way should they sign either or both of the players they acquired.

The best part is, until it is known whether the deal is goal or dust, the Canadiens get to trial run a few scenarios salary cap wise that they may have wasted time on come Thursday. 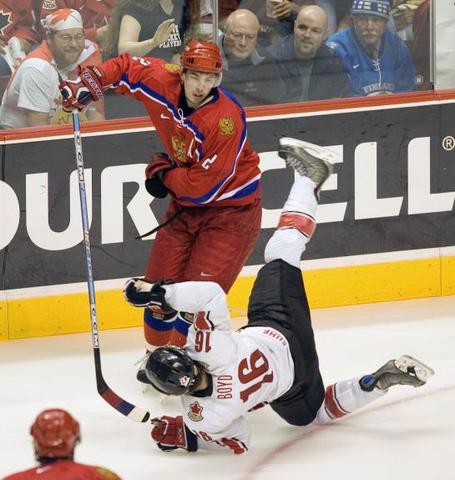 In other words, by having an additional 40 hours to discuss with Ellis and Boyd, two players they have an obvious interest in and would have targeted anyhow on July 1, they now get to do so off the clock and not during costly free agency minutes when they might have been vicegripped timewise between choices. The time saved by getting the barometers on numbers for these two, allows them to investigate others scenarios more quickly, with comparative numbers in hand before noon Thursday.

What this deal tells me, is that with only about eight million in cap space left, negotiations with both goalie Carey Price and Dominic Moore are at a stage where they might compromise other signings in a domino sense. That is completely speculative on my part, because I see Boyd as a fallback option for not being able to hang onto Moore, a player they would dearly like to retain. Moore might be looking for a little more money than the Florida Panthers paid him last season, and that amount would come out of a potential agreement with Price. Boyd being cheaper, frees up some cash, while filling a similar role comparative to Moore, and that makes a Price / Ellis duo in goal more of a sensible possibility.

A potential trade off that might have been at stake without such a trade, might have involved acquiring or signing a goaltender for a salary under one million dollars per season, which would have been a risky option. A smarter move would be to engage a goaltender costing lower than two million who is capable of handling a 35 game workload. Ellis fits that description, and I'll flat out guess that if he's willing to accept last seasons salary with Nashville ($1.8M) he'll be signed rather quickly.

All in all, it's a smart Gauthier gamble.

Why the scenario mentioned above is foreseeable is due to the fact that the Canadiens have bet the farm, and the relationship between cattle and crow, on Price over the next few seasons. The trading of Jaroslav Halak once again annoints Price as the number one, like it or not, and with that, common sense dictates that the salary of a number one goalie be awarded him. Not a ridiculous renumeration, mind you, but respectable enough to avoid dire scenarios moving ahead.

It has been pointed out that the Habs can get away with paying Price as little as his qualifying offer calls for, but who really wants to see Price, proving himself on a one year lowballed deal with the pressure of the world on him. Let's cut the kid some slack, give him a break, pay him like a number one and give us all one less thing to worry for. While the Canadiens are at it, provide him with an experienced backup, not simply to push him, but to allow him a good night's sleep after the occasional off night - a situation that allows for some serenity and less controversy. in the end.

Whatever the scenarios, I like it that Gauthier has enabled some options, cheaply, without heading into free agency cornered by cap constraints and salary demands. 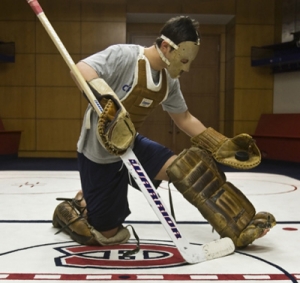 For 2010-11 the Canadiens are so far on the hook for $51,232,000 in NHL salaries involving 16 players, plus the Georges Laraque buyout. With the cap for next season set at $59,200,00, it leaves the Canadiens space for $7,968,000 in salary to be dispersed. This figure does not include those of Ben Maxwell, Max Pacioretty, Lars Eller and P.K. Subban - who are signed - and Price, Moore, Boyd, Ellis and Max Lapierre who are unsigned.

The numbers do not consider Glen Metropolit, Paul Mara and Marc-Andre Bergeron, who do not seem to be in the teams plans.

As a point of speculation, Montreal requires 23 bodies for a full NHL roster, although they may choose to run with 19 or 20 to save cost. As the 16 listed include 10 forwards and 6 defenseman, here is a lineup card:

A look at the above does not include centers Moore, Boyd or Eller, to make sense of these line combos.

The $7,968,000 in salary to be dispersed would then have to be divied between at least four players from a group that would include Price, Ellis, Subban, Lapierre, Moore or Boyd, and Pacioretty or Maxwell.

As Price and Ellis (or another goalie) are givens...

My contract speculation to Price is a three year deal worth $7,800,000, or an average cap hit of $2.6M, renegotiable after two seasons, as per the CBA.

That million saved in cap space represents the question between Moore and Boyd as third line centers, which is essentially the cost of signing one or the other. Of course, other injuries, should they be long term, create additional cap space.

This is all according to figures at NHLnumbers.com, the resource I have found to be the reliable, comprehensible and up to date.