The Canadiens and Blackhawks - April 1, 1967: A Forum Memory Beyond Compare

Share All sharing options for: The Canadiens and Blackhawks - April 1, 1967: A Forum Memory Beyond Compare

Over the course of five years at this site I've related many of my own hockey experiences that tied in to Montreal Canadiens lore, including attending my very first Habs game on October 29, 1977.

On that day, my father and I rode to Montreal on a school bus, with about 50 other Cornwallites, heading to the Forum as a group to see the Canadiens play the Los Angeles Kings. On the way there, Dad and I talked about the time he had taken me to my very first hockey game, a Quebec junior league contest pitting the Quebec Ramparts against our hometown Royals. Guy Lafleur scored six goals against us that time, and the show he put on had everything to do with me becoming a Habs fan for life. Believe it or not, up until then, I only wanted to know about the Bruins and Bobby Orr!

On that bus ride, I recall telling my father that regardless of the game score, I'd be happiest if Lafleur got another hat trick. Montreal lost that night, 5 to 3, and Guy indeed fulfilled my wishes by counting all three Habs' goals.

I'd always thought that was quite a story for a first time big league game, but my own brother Gerry has his own, and his story blows mine right out of the water.

Gerry had told me about this game for years, and it came up again recently because of a box of hockey cards. Through this site, I get asked to do the occasional promotion, and sometimes I take up the offer. One such request was from Upper Deck hockey cards, asking that I do a review of their 2010 set. I wrote back that I would do one, if they agreed to send me a box of those cards to look at. They said they would, so I informed my nephew Dylan, Gerry's son, that we'd soon be opening a box of hockey cards together. I received a package ten days later, and I was really bummed. UD sent me their cheapy line of cards, the 2009 Victory set, one that isn't even updated to this season. Thanks alot - I opted out of the online review that I did not have the product for, which explains why you never read it here.

What I did get out of it, was one heck of a good story, as my brother began pulling out his personal hockey momentoes, sharing the tales that went with it. 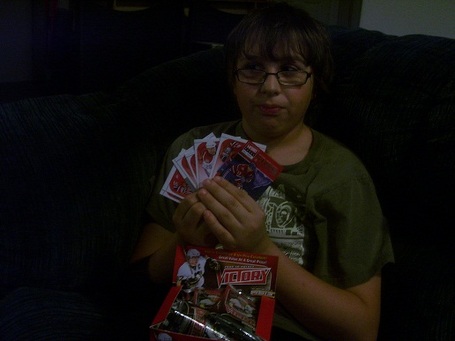 The day was April Fools 1967, curiously, and on that day our family moved into a Jarvis street home where my parents have lived ever since. The day before, our father, Gerry Sr., had driven to Ottawa in a blizzard of a snowstorm in order to obtain the deed to the home we had purchased. A family named the Gwynns were living there at the time, and they did not want to leave for some reason. We needed the deed to the property in order to evict them and take possession of the house. I personally do not recall all the drama then, as I was not even five years old at that time.

Early in the day on April 1, the moving trucks hauled out the other family's belongings and began moving our furniture into the house. Despite all this excitement, my father and brother had a Habs game to get to in Montreal. Nothing was going to get in the way of that!

What was going to make this game special for the Gerrys, senior and junior, was that a family friend named Peter was coming along. Peter has had many unique jobs in his lifetime, and in '67 he was working for a radio station in the area.

Now this is going about 43 years back, so there is a little bit of fuzziness in the details. Something about Peter and a fake press pass he made stemming from his radio station access to the team seems to be a source of disagreement between my father and brother. Dad, a printer by trade, recalls Peter getting his assisstance with the phoney document. My brother, who was 12 then, believes it was the real deal. For my part, I wish to get no one in any hot water, even at this late date, so the radio station call letters and Peter's surname remain out of this tale. 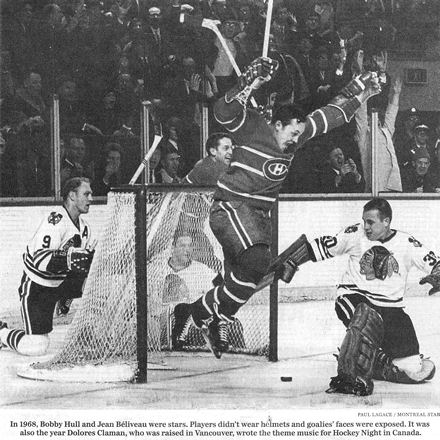 Now I can put myself into my brother's shoes fairly easily. I can relate to the excitement of heading to a Canadiens game with the promise of press access. I did not bring it up at the time because it was far from a done deal, but immediately after the Habs beat the Penguins a few weeks back, I was contacted (along with the bloggers from the Blackhawks, Sharks and Flyers sites) by Sports Blog Nation heads and asked to fill out an NHL press credential form, just like the one which gave me access to last summer's NHL draft in Montreal. Had the Canadiens beaten the Flyers in round three, instead of this, you'd be reading my reports from my experiences and the game at the Bell Centre last night. Travis Hughes of Broad Street Hockey must be having the time of his life! 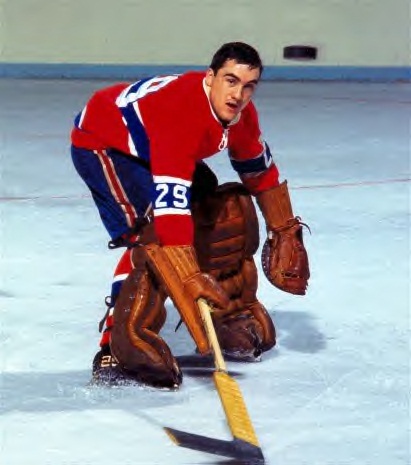 So I can imagine my brother, heading to his very first Canadiens game that day, not only thrilled that he'll get to see the two-time defending Cup champs in action, but also holding tight to the promise that he just might get to meet his heroes in person following the game.

Over the years, Gerry has recalled a few details regarding the game, getting wide-eyed when mentioning John Ferguson's winning goal. Having access to Google's Montreal Gazette news archives, I printed out a copy of the game summary and brought it over to him on the day Dylan and I opened the hockey card box. He was surprised to see that it was Ferguson who scored Montreal last two goals, and more than a little freaked when I told him that not only did he witness one of Phil Esposito's last games in a Blackhawk uniform, but that he was in fact present for the Canadiens very last regular season game at the Forum during the Original Six era. While Dylan and I got busy opening card packs, Gerry went hunting for his most precious keepsakes. 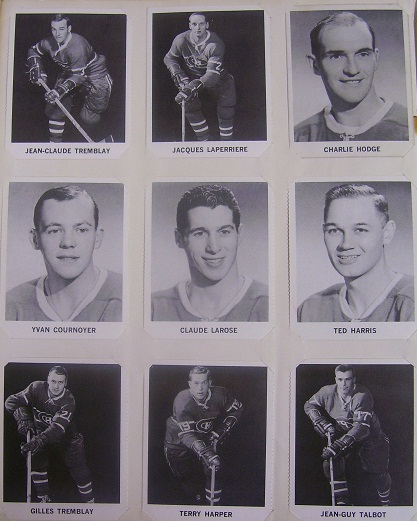 The Canadiens lineup for the game reads like a who's who in Habs history. Jean Beliveau, Henri Richard, Yvan Cournoyer, Jacques Laperriere, Dick Duff, Gump Worsley - all Hall of Famers. John Ferguson and Rogie Vachon, in nets that night - who should be in the hall! The Tremblays, Gilles and J.C, Claude Larose, Bobby Rousseau, Ralph Backstrom, Claude Provost, Terry Harper, the list goes on and on.

And what of the Blackhawks crew, a team that finished in first place in the NHL for the very first time in their history that season? Well there was the Hull brothers, Bobby and Dennis, Stan Mikita, Glenn Hall, Pierre Pilote, Ken Hodge, Pat Stapleton and Ken Wharrem - not too shabby at all! 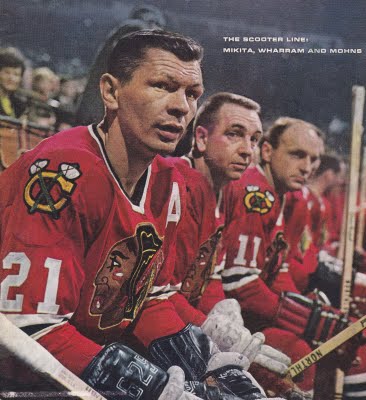 The Canadiens needed a win that night to clinch second place with the Maple Leafs hot on their heals and they got it - a come from behind 5-4 win. Gerry recalled the Habs firing from everywhere in a wild finish. He seemed taken aback a little when we noted that it was Denis Dejordy in goal for Chicago, and not Hall, and that Montreal outshot the first place Hawks 43-29, including a 19-9 third period margin that helped set up the Montreal win. 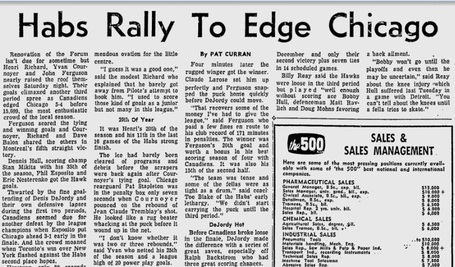 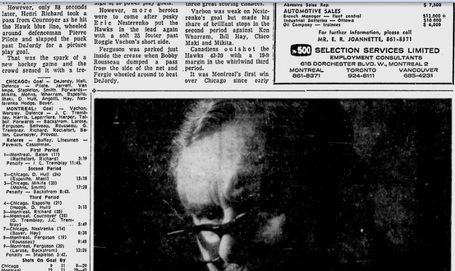 In the flood of memories coming back to him, Gerry, with momentoes from the game in hand, grinned from ear to ear while recounting that he and Peter did manage to make it inside the Canadiens dressing room after the game.

You might dream of such a thing happening yourself, but nothing could have prepared you, Gerry in this case, or anyone for that matter, for what came next.

When you dream of meeting your heroes in the flesh, you never actually think that you will be seeing them in nothing but their flesh!

Gerry made it into the room in time to catch most of the team in various stages of desabille. Members of the press were present, as players stripped down, heading in and out of showers. Likely there was so much happening way too fast for a kid of twelve to seize everything, but Gerry did get a word in with Ferguson, who handed him the game winning puck. As he recalls, there was a metal bucket, filled with ice and pucks beneath it. One puck lay on top of the ice cubes, Ferguson informing that he'd scored with it. 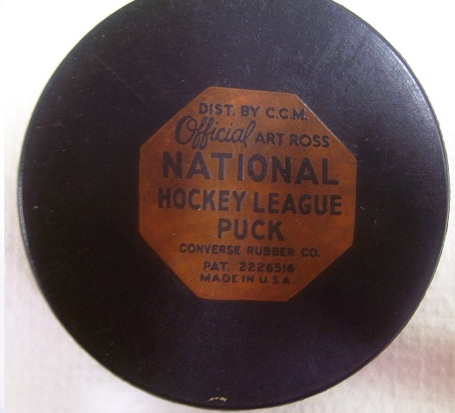 Moments later, Gerry was kneeling at Rogie Vachon's feet, untying the goalie's skates. Does it get any better than this?

Before leaving, Gerry and Peter passed around the Canadiens Forum program from the game, to have it signed by such players as Yvan Cournoyer, Henri Richard, goalies Vachon and Worsley, Leon Rochefort, Beliveau, Ferguson, Laperriere, J.C. Tremblay and Ralph Backstrom. 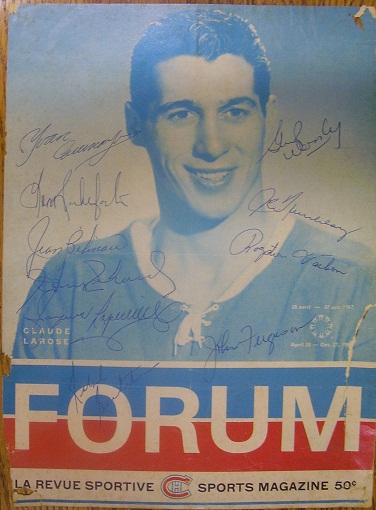 I don't know how one comes down from such a cloud, but watching Gerry recount these memories I doubt that one ever does. It doesn't get more special than this.

Caught up in that moment back in time, Gerry fetched another prized possesion, an Imperial Oil 1966-67 NHL Hockey Yearbook, with cards of players, stats on back, that took him years to collect in full. He recalls that he had to go to great lengths to fill in the missing players, often communication by mail (snail mail back then) to trade up doubles to complete the set. 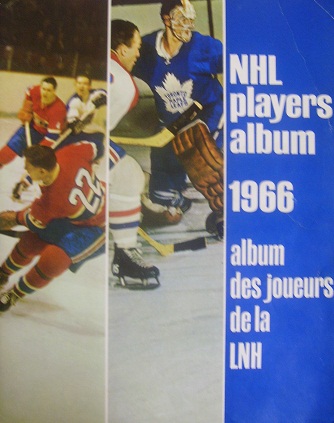 Seeing the images on cards of Habs immortals that have since lived in our hearts and minds forever, was jarring moment for me, especially in juxtaposition with just having opened a box of new cards with Dylan.

Cards given away or pennies cheap back in the innocent days, tied in with a purchase of gas, or a cereal box, maybe even five cent bubblegum are priceless today. Now we get to spend close to four four bucks for a pack of six cards, three of which are likely players already traded from the team they are pictured with, and they are genuinely worthless on purchase!

It was definitely simpler times back then, when players and the game itself were more accessible to fans. Today, with the game so large and grand, the multitude of barries put up that keep us from the multi million dollars heroes we have, would never enable such a scenario. The pressure players are under to perform, the constant magnifying glass they are under from public consumption and the perhaps the haughty disposition most of the players themsleves have today would prevent such dreams.

Perhaps it is why we should treasure any moment we happen to come across that involves meeting our heroes, the Canadiens of our time, that we cheer for. I know that on a personal level, when running into Cournoyer years back, in town for a Burger 12 opening, or having Kirk Muller come inside my daughters dressing room during a tournament, it is always a special unexpected moment.

But those moments now, happen when they are among us, not when we are among them.

It is sadly an era that has passed.