Montreal trades up from 27th to Phoenix's number 22 spot to take a big defenseman in the first round.

Share All sharing options for: Montreal Canadiens select Jarred Tinordi with the 22nd pick in the 2010 NHL Entry Draft 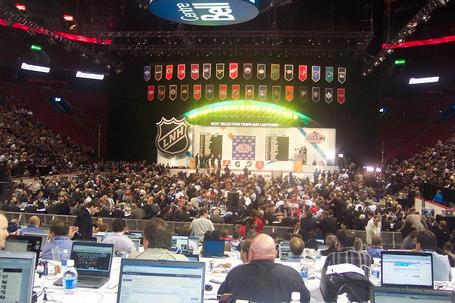 Later this evening, the 2010 Entry Draft will be getting underway, and all Habs fans will be very curious to see how the club approaches this seasons fishing session.

Will the Canadiens make a deal, trade up or trade down in rank, or make a move that defines in some ways their short term future.

There is speculation that the Kostitsyn brothers are being dangled as bait and also that the club is looking for another defenseman and top six forward. It will be interesting to follow along and see how the scenarios play out over the weekend.

This evening, I will be live blogging during the draft, noting the selections leading up to the Canadiens pick. I'll be tuned in on the tube, listening to CKAC, and watching for interesting commentary at HIO and throwing it up for discussion here.

A short while back, the SB Nation bloggers did a mock draft. I polled readers here on who EOTP's choice should of five players listed. Brock Nelson won the poll, with Jarred Tinordi placing second. Both were scooped up in the mock round before my turn came, so I then selected Ryan Spooner of the Peterborough Petes.

In many of the mock drafts I have since seen, Nelson and another good one, Tyler Pitlick, were still available at the 27th spot, with Spooner dropping down, likely due to injuries suffered this past season. Dylan McIlrath will also be a prospect Canadiens fans will be keeping an eye on.

The SB Nation mock draft was unveiled over a ten day period, and has spread into a second round, with Bruce Peter, (a.k.a. Saskhab) choosing for the Canadiens at 57th.

Until then, here are some draft day reads to bone up the prospects available.

The selection process at EOTP

A profile on Spooner courtesy of In Lou We Trust

The order of selection for the entire draft

The SB Nation mock - first round

The SB Nation mock - second round

No surprise there, even after all the manufactured suspense. Hall has simply had more team success with Windsor too make this close. The Oilers now have a timeline to get their act together and their first franchise player since the days of Gretzky.

Bettman has a cold it seems, in California, which is funny! What he's saying about having eight Californians in the draft is of no small significance.

Thank you Maple Leafs! Hopefully, the next time Toronto messes up, it will benefit some team other than a Habs rival.

If I'm Seguin, I'm happier headed to Boston than Hall is headed to Edmonton. Boston will build around Seguin quickly, with many elements already in place. TSN cannot get Chiarrelli to commit himself on moving Savard and Thomas.

I smell another Bowmeester, no offense, but sounds and looks like a long term keeper.

As per TSN, father is a die hard Hab fan.

Odd to announce the conditional trade between Florida and Vancouver. Imagine that the player Florida covets not being available at the 25th spot. What is going through the heads of Keith Ballard, Michael Grabner and Steve Bernier.

A center for Rick Nash in a year or two.

A bit of a surprise. Good fit for Isles.

Me, I'd draft Alissa Milano.

Either a gram slam or ground out according to Bob McKenzie. Connelly is the pick of former Habs goalie Charlie Hodge.

Hip and hand injuries have scared some teams off.

The 'Canes get themselves a goal scorer with figure skating tendencies.

GM Rutherford doesn't like to draft defensemen as he feels they are not developed until they are free agent, so he's skipped over Cam Fowler and Brandon Gormley.

Likely the franchise that drafts worst, apart from Kovalchuk are duds galore, take a risk with Burmeistrov.

Very skilled, but small, which may or may not matter in time.

Rangers take the Undertaker in the surprise of the draft so far. What's up with Gormley and Fowler? Did they stink it up at the combine?

Word on McIrath from McKenzie is that his skill level is far from the NHL.

First goalie and first American taken in the draft. Campbell has a great track record of winning.

Could Gorley and Fowler end up available at 27?

Maybe they failed a sobriety test!

What can you say, fowls and Ducks go together?

Maguire says the Ducks need their head examined if they pass on Fowler, and they heard him!

I bet they can't believe their luck.

Finally, and first draft pick from the Q.

The 'Yotes dedicate their pick to their deceased physical therapist!

Pegged as a late first rounder, Schwartz jumps up just after the fall of two top five propects.

Compelling story about his sister, dying while waiting for a donor.

A very well rounder blueliner, according to Bob Mac. Needs some help with toughness.

Ottawa Senators trade pick 16 to the Blues for David Rundblad and St. Louis rolls the dice on a Russian tank who wants the win the Stanley Cup more than play in the KHL. Good on him.

Right off the board, Hishon was rated as low as 51st due to injuries last season.

Colorado, by recent years, seems to know what it is doing at the draft table.

One of nine kids, yikes!

Watson is reputed to be a good all around player and penalty killer.

GM Gauthier flips picks 27 and 57 for numbers 22 and 113 with the Phoenix Coyotes and grabs a good one, defenseman Jarred Tinordi, son of fomer NHLer Mark Tinordi. Big, tough and captain of the U.S. U-18 team.

If Gainey was a sitter, Gauthier is a go-getter. I like this move. 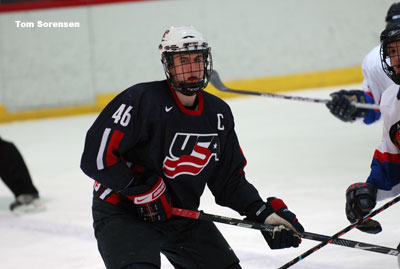