Share All sharing options for: Study Proves Canadiens Draft Record Over The Years Among The NHL's Best

For years, there's undoudably many hockey thinkers who thought to undertake such a studious work, but never dared considering the monumental task at hand.

What I'm talking about is an in depth study of all 30 NHL team's records at the drafting table since 1994.

Daoust, a friend of the Maple Leafs site Pension Plan Puppets, has done all of us who never dared, and every hockey fan in general, a huge favour by putting in tremendously long hours it must have taken to simply compile the data that went into such an enormous project. Folks will be pointing to this study and referencing it for years to come.

Consider first that the study includes 30 clubs, across 15 seasons, and encompasses upwards of 3000 players and you get an idea of the breadth of the work. It will most certain alter many an opinion and reinforce a great many others with its result.

Why I'm so ecstatic about this, is that I've often wanted to pursue such a project for myself, especially in light of how the Montreal Canadiens record at the draft table is often misrepresented without the benefit of comparison to other organizations.

Across the board, Daoust's study should be an eye opener for hockey fans, particularly those who unfairly castigated the Habs more brutal picks without considering that every team messes up, more often than is believed.

The focus of the latest work are specifically the years from 2001 to 2007, as seen in the table below. The chart, from left to right shows that Montreal, in drafting 56 players in those years, had the sixth highest rank of average pick (126) of all 30 teams. (Click on the image to enlarge) 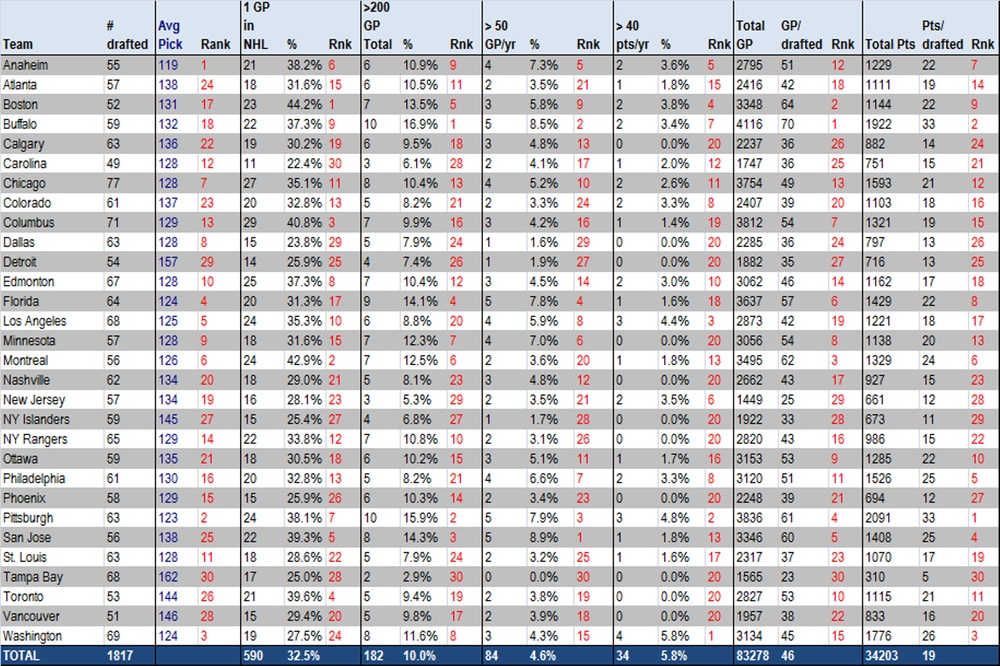 When it is considered that in those years that the Canadiens have only once drafted in the top 5, theinformation, all taken together, shows that they have maintained a fairly strong ratio, among the best, of turning draft choices into NHL players

The average number of players selected in that time is approximately 60 per team, and only 7 teams have chosen 56 players or less in the seven drafts. It is then remarkable to note that Montreal have the second highest rate of conversion (42.9%) in turning 56 draft picks into players that have played in at least one NHL game, second only to the Bruins at 44.2%.

The results were based from findings at the Hockey Reference draft pages, which actually lists 24 Canadiens draftees as having played in the NHL. They are:

The list does not include games played this season by P.K. Subban, Mathieu Carle, Ryan White and James Wyman, so Montreal actually had exactly 50% (28 of 56) play in at least one game.

Where it gets more interesting on the surface, is that the Canadiens have had seven of those players top the 200 games played mark, which ranks them in sixth place. This shows that while 23 teams have drafted more players, Montreal's numbers are no fluke here.

The fourth column, I'm at a loss to explain. It seems to be numbers of players who played greater than 50 games this past season. With only 2 Canadiens listed, I'm thinking it should be that's Plekanec and Andrei Kostitsyn. The next column shows one player having surpassed the 40 points plateau, which would be Pleks again. Maybe someone can clue me in here!

Column seven sustain numbers in previous ranks. Montreal drafted players have played a total of 3,495 games, an average of 62 per player, which ranks third.

I'd have guessed the Habs tobe high there, but not as high as third!

Lastly, there is total points and points per drafted player. Montreal total is 1329, good for eighth spot, which isn't too shabby considering who the Penguins, Capitals, Blackhawks and Flyers have been able to draft over the years. The other team ahead of the Habs in total points are Buffalo, San Jose and Florida, quite surprisingly.

In average points per player, Montreal ranks sixth with a 24 point average, again behind the same teams listed above, Chicago and Florida excluded.

There's no grand summation that I can make after this quick whip through these ranks and numbers, but one opinion I've always held is that the perception of the Canadiens drafting record is like many other things about the team - blown out of proportion. This proves it.

As you can evidence, when put against the records of other clubs, it is hardly so terrible.

A quick disclaimer - I've happened onto this work late last evening, and did not go through it with a fine tooth comb by any means. I've hurried to pass it along to you all so you could appreciate it as soon as possible. That said, I have not had the opportunity to study all columns with any great depth.

If course, there are all kinds of mitigating circumstances I've not perused this early in. For the time being I'll leave that to all you experts out there to break this down further.

What I urge everyone interested to do, is leap over to the Pension Plan Puppets site, don't tell your friends you visit a Leafs blog for higher intelligence, and peruse through all they have on Daoust's work.

Just kidding - give him your props, it is well deserved!