The Tale of the Habs' Lucky Horseshoe

Share All sharing options for: The Tale of the Habs' Lucky Horseshoe

Just incase you think you have read this piece before, this article comes from the site's archives, around the time of December 2008. I was reminded of it over the past week or so from conversations I'd had with some of the best friends I'd made through this site, namely T.C., Kevin and Francis, who are always finding Habs' nuggets in different places. It's based on some strange coincidences through the years, going all the way back to 1992. Hope it puts a little smile on your face in this off-season.

A few times in my life, I have come across Canadiens related things, be it a newspaper clipping or old books, in odd and unexpected places. It is a bit of a weird, ongoing coincidence with me, how these things come to me in such odd ways.

One time, in the late 1990's, I was standing in line to buy a ticket to a movie inside a local mall. There was a hockey ca

rd and memorabilia store right next to the theatre. Inside the store, unknown to me, was a former employer with his infant son of 2 years. The young boy happened to knock over a box of common cards from a table, and while his father was picking the mess up, the boy wandered over to me about ten feet away and handed me a Brian Savage card.

That night, Savage scored a pair of goals!

It is another older, and stranger happening, that makes me recall such a trivial thing. It's revolves around a lucky charm, and I'll get to that in a bit.


About five years ago, I was tearing up an old floor in my house and putting a new carpet down, and I found a local newpaper dated February 20, 1954. The Daily Standard Freeholder, it was called back then. 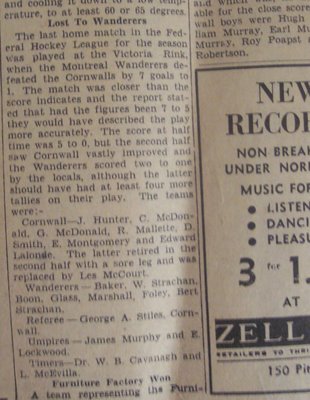 I found this old paper again couple of weeks ago. I had it stored away in a basement box, and I encountered it again while looking for articles I could add to the Habs Fans Summit raffle.

My house was built in 1889 and it looks it. There were several layers of linolium flooring underneath the old carpet, and after first finding the front page of the paper, I was careful to lift away each piece as to not tear any pages of the delicate print.

Once all the floor had been removed, I ended up with a complete paper for that date. Looking through it, one can't help but think, "holy smokes have times changed!"

A dollar a week deposit on diamond rings!

Inside, there was but one NHL game report, from a Rangers and Blackhawks game that for some reason was played in Indianapolis. There were a few Canadiens related tidbits inside. One was an editorial about the effect of televison on sports attendance that featured insight from former Canadiens owner, and then current Alouettes owner, Leo Dandurand. The second was a flashback article to 1904, about a Federal Hockey League (pre NHA and NHL) game between the Montreal Wanderers and the Cornwall Hockey Club with Newsy Lalonde in their lineup. 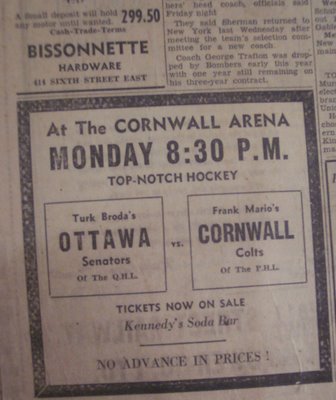 There other interesting bits of hockey and non hockey related news inside. The QHL's Ottawa Senators, run by former Leafs goalie Turk Broda were coming to town to take on the Cornwall Colts. There was a photo of Marilyn Monroe entertaining the troops in Germany, some time period movie listings, and an ad for the Cornwall City Press, the business owned by my grandfather, soon to be passed down to my Dad. The front page headline was of a Windsor salt plant that had collapsed and fallen into the Detroit river, due to the ground caving in beneath it.

Oddly, the Detroit Red Wings would beat the Canadiens in that year's Stanley Cup final in seven games. The Maurice Richard riots in Montreal were one year 25 days away. After one more Cup in 1955, Red Wings fans would endure a 42 year cupless drought.

Happening upon this newspaper wasn't the first time I lucked out finding Habs history in strange places. Years earlier in 1992, while demolishing a house as part of county work crew, I found a local paper from 1956 with an article on Henri Richard scoring his first NHL points. I also opened an abandonned cedar chest in that house, and it was loaded with old copies of Life magazine. I took one home and found all kinds of great shots of Canadiens players brawling with original six rivals. 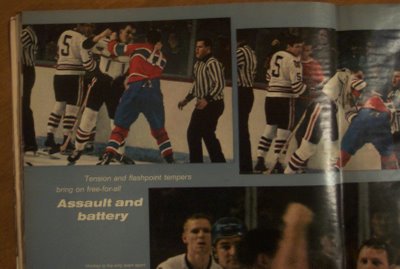 The article was on NHL popularity after the 1967 expansion. One great shot in it, included here, feature a Canadiens player diving past, or being tripped up by a Red Wings player.

I never got to take the Richard article home. I'd placed it somewhere I'd forgotten, distracted by finding almost $400.00 of 1954 print Canadian bills (twos, fives, tens and twenties) under the linolium floor of an outdoor shed. The money had rusty nail holes rotted through it. I hurriedly stuffed the cash in my workboots, not telling a soul, and forgot all about the Richard paper clipping.

You'd think I had a thing for ripping through old linolium floors, but those are perhaps the only instances in my lifetime where I did. I often wonder what the other floors in this old house have to offer. 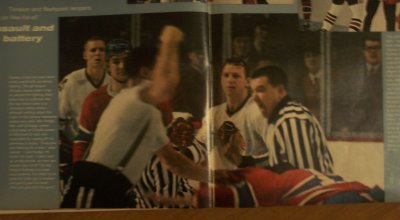 What we were doing there was converting the old property into a smoke house, used to train the Glengarry County Fire Department. After clearing the house of obstructions, we demolished attachments to it, such as a carport and the shed where I found the money. We were working a Saturday, which was rare, as we were essentially rained out the Friday before, which was supposed to be our last contracted day on site. As we were needed to finish up, we were given the option of working Saturday at time and a half. 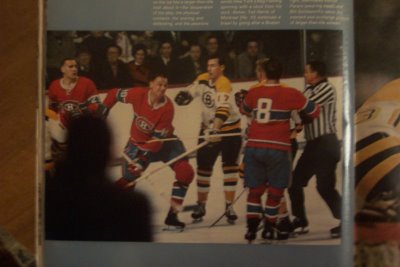 I almost decided not to go. Sunday, the 14th of June, was my thirtieth birthday. I had plans to go out of town for the weekend, but only after they fell throught did I decide to go to work.

Four days earlier, on Tuesday the 9th, I found a horseshoe, rusted and full of dirt and ground. It was sticking out of the ground, and it tripped me for a loop as I ran over it. I pulled it out and threw in my Canadiens lunchpail, stangely enough, and put it in our work van. 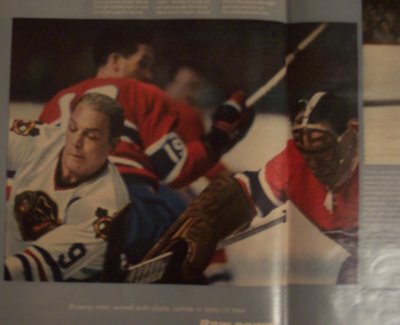 I never thought of the horseshoe as a lucky token - as I said, I'm devoid of any ridiculous superstitions. I thought it would make a cool thing to nail above my shed door. Instead, I threw it in the cupboard under the kitchen sink and forgot about it for a week.

Later on Saturday night, just before supper, I met a friend who bought half of the old money from me at face value. My wife and I decided to use some of the money to go to the bingo that night instead of going out of town. Now I'm about as big on bingo as I am on superstitions, right. So we go, and I win $200.00 - not bad for a guy who has had no money luck his entire life. Happy birthday to me!

After leaving the bank, I run home to tell my wife and her family next door. I was absolutely insane over having all this money fall into my lap basically, over a three day period. A total of $646 in all.

My father in law mentions that rusty old horseshoe I took home the previous Tuesday. We're almost on the floor with laughter. Not being superstitious, I lend him the horseshoe, and he places it under his kitchen sink for a week. He buys $30 worth of 6/49 tickets for the next draw. 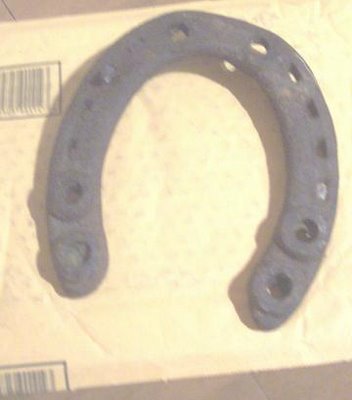 Not being superstitious, I buy $30 myself, and we then agree to split the inevitable winnings. Neither of us wins so much as a free ticket. He returns the horseshoe.

I'd reply that all members of our family are alive and well!

Perhaps the weirdest thing of all ocurred when I was writing this piece and went under the sink to retrive the horseshoe for a photo. My oldest daughter has played hockey for nine years now, but to her younger sibling, hockey is an alien life form. I asked my youngest if she knew the good luck horseshoe story, and she didn't. 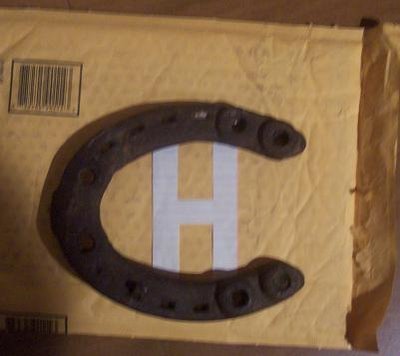