56 Goals in the 1973 Finals! - Wouldn't it be sweet for the Flyers and Blackhawks to go for this?

Share All sharing options for: 56 Goals in the 1973 Finals! - Wouldn't it be sweet for the Flyers and Blackhawks to go for this?

The Chicago Blackhawks and Philadelphia Flyers 2010 Stanley Cup final started out on a positive note in regards to threatening the all time mark for goals scored in a final series with a 6-5 opening game. With goaltenders Michael Leighton and Antti Niemi not being playoff commodities of longstanding repute, the opening game tally had record researchers skimming the books looking for parallels. A 2-1 win by Chicago in Game Two has settled the first contests mesh bulging frenzy, and perhaps the series trend some were hoping for will come to pass.

In looking up past goal scoring heights for a Stanley Cup final, the 11 goals scored by both teams in Game One tied a record set by the Blackhawks and Canadiens in the 1973 final, an 8-3 Montreal win. In that series, which also included an 8-7 Chicago win, a whopping total of 56 goals were scored in six games. 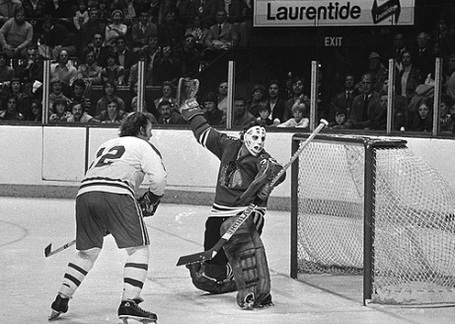 The 15 goals netted in Game Five in 1973 are still a Cup final record. At the time, it was also the individual playoff game record, but it has since been surpassed on three occassions, the initial and most notable one coming on April 7, 1982, when the Edmonton Oilers defeated the Los Angeles Kings 10-8.

In terms of Stanley Cup finals, the six game 1973 series stands as a unique display of goal scoring prowess on the largest of stages. Consider the following:

After four games in 1973, the Canadiens and Blackhawks had scored 31.

After five games in 1973, the Canadiens and Blackhawks had scored 46.

That total is still 9 goals shy of the mark set in 1973 by the Habs and Hawks. 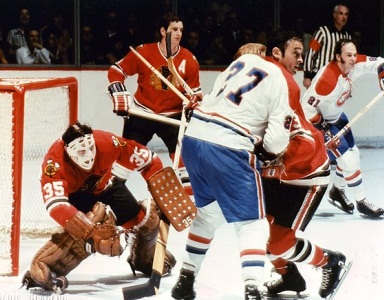 It could be said the Montreal / Chicago final of '73 holds the marks for goals in a four, five, six and seven game series, although the series only required six game to crown a champion.

That season in the 16 team NHL, the Canadiens and Blackhawks were respective winners of the East and West divisions. Montreal were second in goals scored with 329 (one goal behind the Bruins) and first defensively, allowing only 184 against. Chicago scored 284 goals that season, the fifth best total in the league, while their 225 goals against ranked fourth.

The two teams boasted 12 future Hall of Famers, ten on the Canadiens' side, and they included stalwart goaltenders Ken Dryden and Tony Esposito, perhaps the two best puck stoppers the decade had to offer.

Looking back 37 seasons, it still seems inconceivable that these two clubs, backed by goalies not named Leighton and Niemi, would be involved in a final that saw four games go into double digits (8-3, 7-4, 8-7 and 6-4), as the teams combined for an average of 9.33 goals per game.

Talk about an exciting series. Those who witnessed it will likely never forget those games, and the feeling that any particular contest was never in the bag until the final siren.

Here is a game by game rundown of the series, with newspaper accounting from the Montreal Gazette and video clips, some compiled the dilligent Francis Bouchard, for your viewing pleasure.

Jacques Lemaires paces the Canadiens with a two goal, two assists performance. Montreal outshoots Chicago 38-30. The game was 2-0 for Chicago 1:02 in, but Laperriere's goal a minute and a half later settled the Canadiens down. 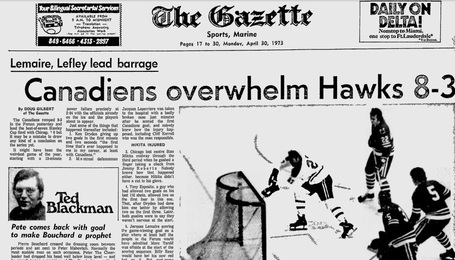 Here are the video goal highlights from Game 1 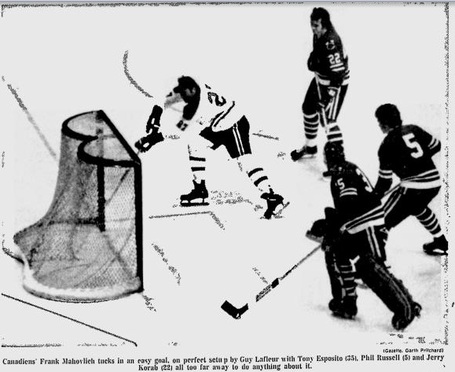 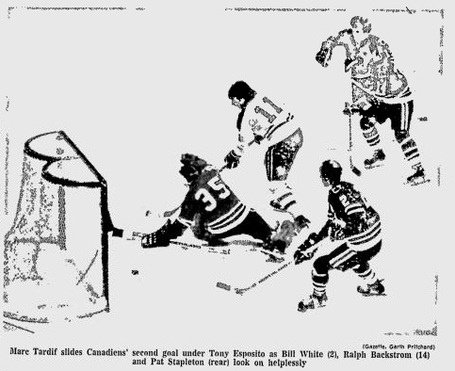 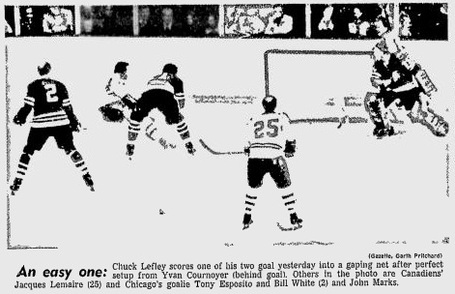 Montreal gets a rare goal from Pierre Bouchard, his second of these playoffs, and two from Yvan Cournoyer, while outshooting the Hawks 30-19. 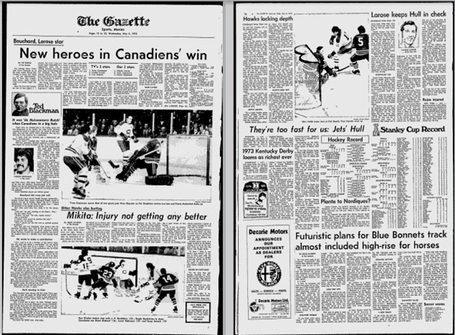 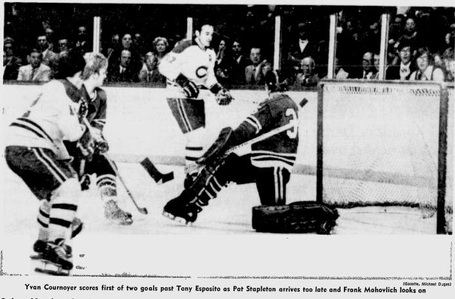 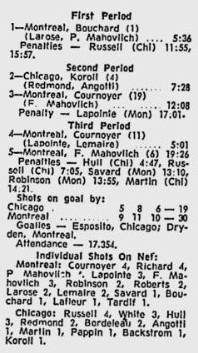 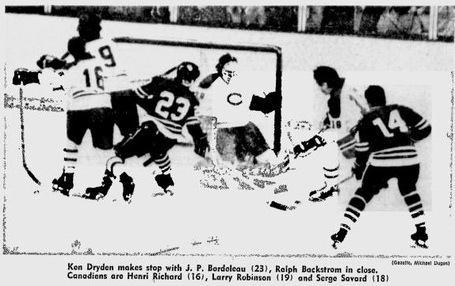 Back on home ice, the Blackhawks jump out to a 5-0 lead before the Canadiens wake up with four unanswered goals to put a scare into Chicago fans. The Canadiens however, cannot muster a fifth, the Hawks put two into an empty Montreal net at game's end. Chicago outshoots Montreal 37-33 in this one. 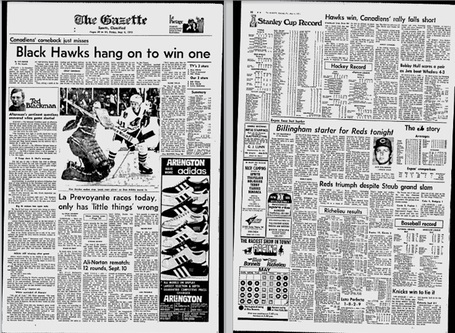 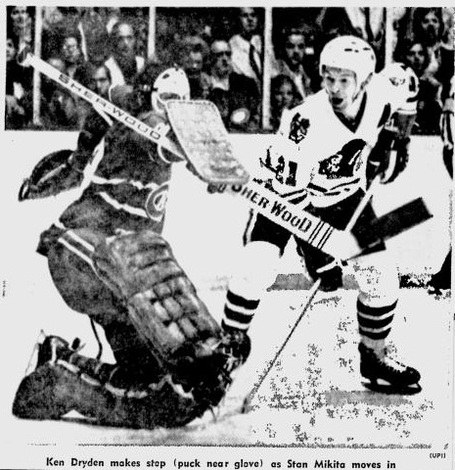 The Habs pull out the defensive shell for one game, shuting out the hawks and limiting then to 19 shots on goal. 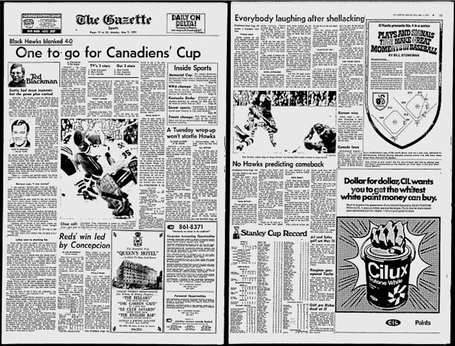 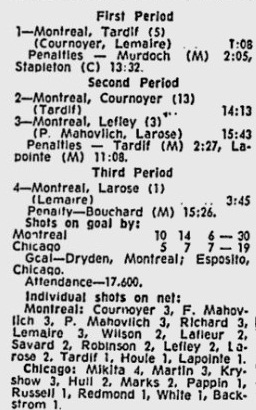 Here are the video goal highlights from Games 2, 3 and 4 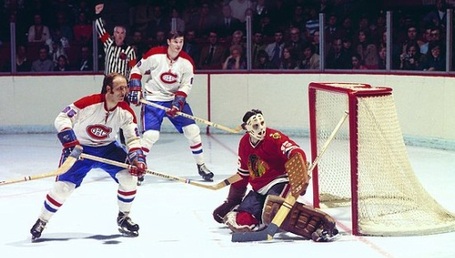 From defensive shell to shellacked, as Dryden has one of his notorious off nights. Pappin and Mikita each score twice for Chicago. Both teams fire 30 shots. 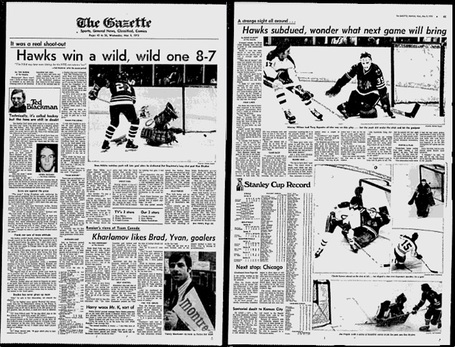 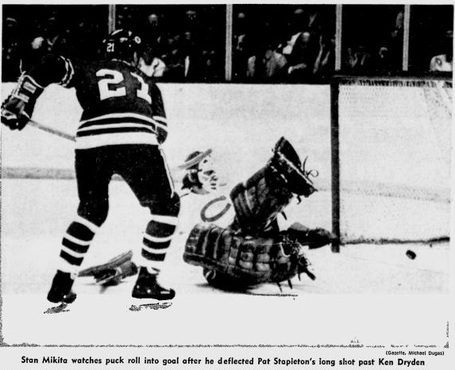 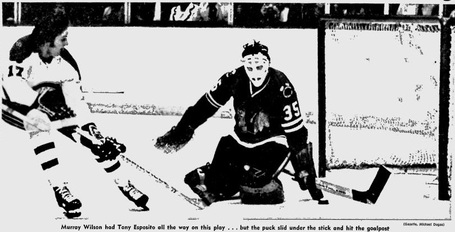 Despite Pit Martin's hat trick heroics, the Canadiens go on to win their 18th Stanley Cup. Shades of 1971 - after Chicago gets out to a 2-0 lead, Henri Richard scores next to narrow the gap. Yvan Cournoyer scores his (then) NHL record 15th goal, which proves to be the winner. Cournoyer, who earned the Conn Smythe for his playoff performance, linemate Jacques Lemaire, and center Peter Mahovlich each earned points in all six final games. 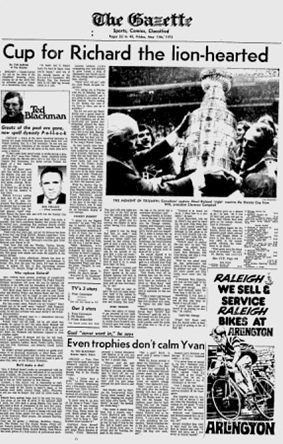 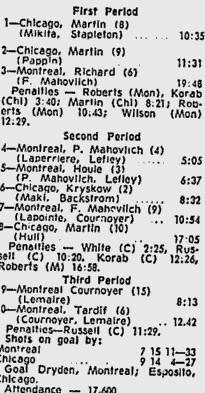 Here are the video goal highlights from Games 5 and 6 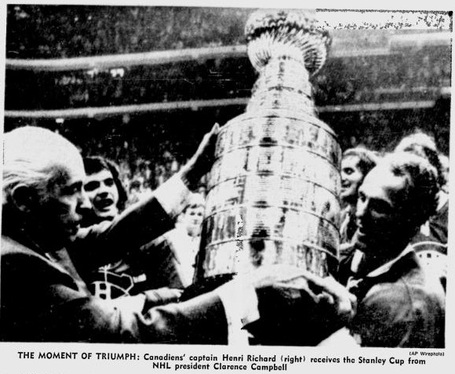 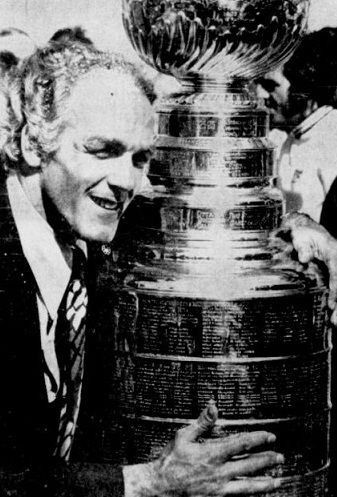 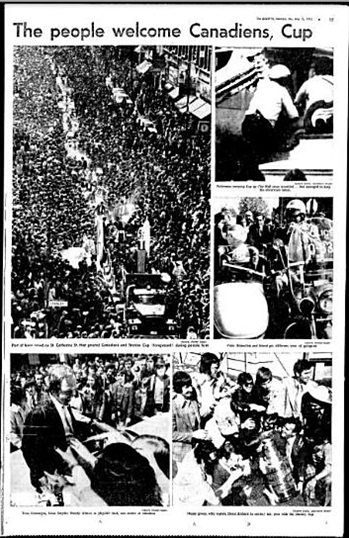 Here are the scoring stats for both Montreal and Chicago in the six game final. Now wouldn't it be a treat if messieurs Toews, Kane, Richards, Carter, Byfuglien, Briere, Sharp and Giroux could post these kinds of numbers in 2010? 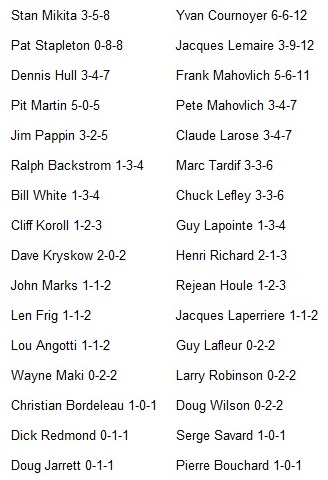