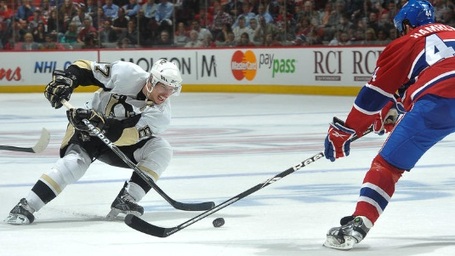 A valiant Game Three was played at the Bell last night, with one team making one more error than the other, costing the game. It was a game in fact, where the errors were greatly minimized and fewer risks were taken.

After surviving an early surge of Canadiens artiliary, the Penguins turned it on the second period, emphasized a cautious attack, and won the contest on an early third period marker during a power play.

Sensibly, the match was very similar during some stretches, to Game Two, subtracting the bounces and breaks that turned the game Montreal's way. In this one, once Pittsburgh gained the lead, the successfully contained the Canadiens efforts with no risk plays.

It's often forgotten when citing Pittsburgh's big names, that this team can play defense at the required time with the best of them. In the Canadiens 18 shots on goal, perhaps six were considerable scoring chances.

The Canadiens best scoring chance in the first, came off the stick of Maxim Lapierre, who had beaten Fleury high, but the puck careemed off the crossbar. Earlier, during a penalty to the Pens' Alex Goligoski, the Habs had their best chances, buzzing the Pittsburgh net repeatedly without finding mesh.

After Fleury held strong during the first period onslaught, the Penguins ran up the shot clock in the second, outshooting the Canadiens 13-3. This time, it was the Canadiens frustration that caught up with them.

As the final seconds wound down with the Canadiens pressing, Sidney Crosby cashed in a pair of Oscar nominations, first on a tangle with Gill behind the net that drew a holding call, and twelve seconds later when he hit the deck after a stick grazed his helmet with no time on the clock.

In the ensuing scrum, Crosby slashed one random Habs in the ankle, who had done nothing to him, and punched another (Hamrlik) who was tied into a scrum with another Penguin. Out of the entire fuss, it was Josh Gorges and Kris Letang who went off together, which is curious, as they had done little more than any other tango (Crosby-Gomez ot Malkin-Gionta) happening at the time. 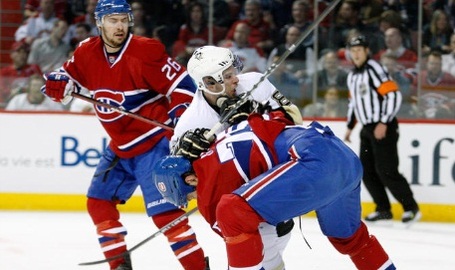 Say what you will of Crosby's competitive nature, it is his endless embellishments that have earned him another entirely different reputation altogether. But that my friends, is what a gamer is.

Hence, the Canadiens began the third on the penalty kill, both Gill and Gorges in the box, and it is here than the game turned. Down to four defenseman for the next 1:48, it was the pairing of Hamrlik and P.K. Subban that were charged with nullifying the likes of Sergei Gonchar, Goligoski, Evgeni Malkin and Crosby.

The were 30 seconds or so left in Pittsburgh opportunity, when some Canadiens confusion had their forwards break from box format. Scott was high toward the point, unable to take the passing lane to Malkin away. Fed a perfect pass, the big Russian sniper slapped a shot Jaroslav Halak, screened by Crosby, only had a partial glimpse at. 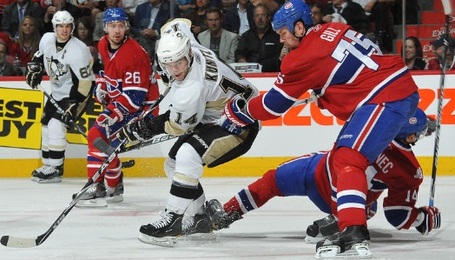 The Penguins were sufficatingly tight defensively for the next ten minutes, the Canadiens best chances starting to come with seven minutes on the clock. Fleury successively stoned Brian Gionta from the left side, Mike Cammalleri from the right, and a Tomas Plekanec deflection right at the crease.

After a wild first game in the series, and a second decided on bounces and breaks, the third became a classic trench grind playoff game. It is no dount a sign of things to come in the round, and gaining a edge anywhere one can be gained often decides games like this.

One player smart enough to know is named Sidney Crosby.