Habs Dream Season Over With 4-2 Loss To Flyers

Share All sharing options for: Habs Dream Season Over With 4-2 Loss To Flyers 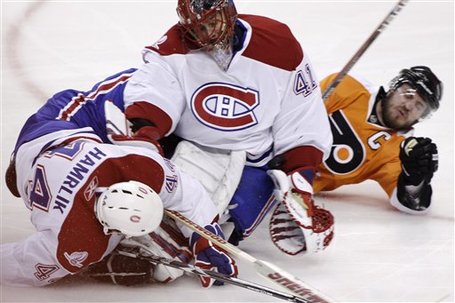 Of sixteen hockey clubs earning a post season lottery ticket with a chance at winning the 2010 Stanley Cups, only two won more games than the Montreal Canadiens.

When the playoffs began, no one except the Canadiens players themselves expected this deep of a playoff run. The team has provided it's fans with countless thrills as they upset the President Trophy winning Washington Capitals and upended the defending Stanley Cup champion Pittsburgh Penguins.

In the playoffs, when it did matter, the Habs won more games than all of them.

The accomplishment was an enormous one, far beyond the predication of baffled experts and astonished fans.

As Canadiens fans, we must tip our hats to this group of players, who battled relentlessly and resiliently in the face of all odds.

Personally, I've long felt, even prior to last summer's massive changes, that where the Canadiens needed to be measured most in the Eastern Conference was against teams strong down the middle, such as the Capitals, Flyers and Penguins, with Crosby, Malkin and Staal.

It matters not how it was done, but Montreal defeated two of these rivals, and now have a much clearer idea of where they need improvement in order to go farther in the post season.

Scott Gomez and Tomas Plekanec are not, nor will they ever be, perfect faultless players. But combined, both gave the Canadiens in excess of 90 assists across two lines this season. Unless Plekanec can be replaced in the off season, he should be resigned.

Dominic Moore's contribution since the trade deadline has been immense. His addition, gritty heads up play, and dedication allowed Montreal a tougher third line. Without this, Montreal do not go three rounds deep. Moore must be brought back.

Nothings needs to be said about Mike Cammalleri and Brian Gionta, the Canadiens snipers in these players. They were the front line of a surprising attack, and it is incomprehensible how much they were able to do considering the often absent support from certain linemates.

Andrei Kostitsyn and Benoit Pouliot's talents are more mature than their fragile confidences. Patience, yes more of it is required, by everyone concerned.

Glen Metropolit had a career year and played injured throught the playoffs. We did not see his best, but he was giving everything he owned.

On the backline, it must be asked how much better this team would have been with Andrei Markov?

Contrarily, it was answered how good it is without him.

Roman Hamrlik, aging, gave all and sputtered quickly. He then went to the well, returned as the mentor to a greenhorn, and emerged energized for more.

For a player his age, what more can be asked?

Ditto for Jaroslav Spacek, who missed a chunk but returned without missing a beat. His contribution, dependability and veteran leadership were assets needed to get by the Pens. Without him, Pat Hickey's Quebec plates are safely on his Honda.

"Skillsie" Gill, that lovable lighthouse, displayed every reason why he was sought out by Gainey in the summer. Can the Canadiens even put up a fortress against Washington without him?

Marc - Andre Bergeron, for a little player, never gets the same respect as Gionta or Cammy. But regardless his, ahem, shortcomings as a player, the guy sticks his dick out there, unafraid, putting it on the line for a team he has dreamed playing for.

P.K. Subban provided the best glimpse into the Canadiens future this spring....and it's a beauty! This kid has winner written all over him. No matter that he dropped the ball a time or two, without him....Hickey's plates again.

Josh Gorges I can only sum up in one way. Remember the puck imprint on the back of his helmet from the Mike Green blast in mid - season. Never has one image so well define a player. The guy is a leader without a letter.

Ryan O'Byrne would win the unluckiest Hab award a second year running. Between playing some great and inspired physical hockey, Rhino can go from hero to klutz in 1.2 - but it's all good. He will be a valuable commodity on a future playoff version of this team in another season or two.

Jaroslav Halak I've saved for last. I once said he'd never be an NHL starting goalie but I totally underestimated his competitiveness.

It is May 23rd today, and if not for Jaro, the playoffs are over on April 23, if they'd have even made it at all.

His play gave the team something to rally around and build upon in the playoffs. He was the story of this team and has earned all his accolades

Jaro, you're not only the number one goalie, you're just plain number one.

It is a painful time fans, too soon to even begin thinking of next year, so I leave you (Habs fans, and precious readers of EOTP) with this...

It's been a ride!