Solving Leighton, Discipline and Curing the PK - Not Too Late For Canadiens To Turn Series Around

Share All sharing options for: Solving Leighton, Discipline and Curing the PK - Not Too Late For Canadiens To Turn Series Around 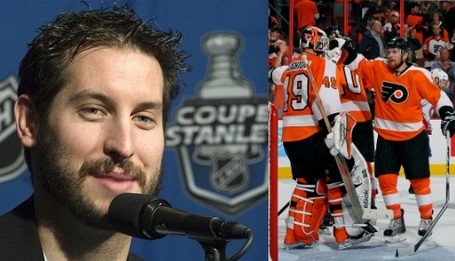 Canadiens fans who recall the 1993 Stanley Cup may remember that in round one the Habs started off with two losses to the Quebec Nordiques. They were not the whitewash, one sided score variety that have been seen against the Flyers in this series, but a second game 4-1 loss to the Nords stung particularly.

After that game - and Kirk Muller has recalled it more than once - Canadiens then GM Serge Savard came into the Canadiens dressing room and proclaimed "Boys, if we keep playing like we are, we'll win this series."

The statement at the time surely caught a few off guard, but it was designed to underline the fact that while the team had lost games, there were still enough things that they were doing right.

In this series against the Flyers, the Canadiens, aside from goal scoring, are holding an edge in five on five play. Such is not a negligeable note, with the series back in Montreal for a pair of games. Should the Habs continue to reign five on five, and make three important corrections to their game, chances are that by Saturday this series could be evened up.

The three areas of concern are discipline, the penalty kill, and getting better chances on Flyer goalie Michael Leighton.

Any team plays better with an early lead that increases their chance of winning. Lapses in discipline combined with breakdowns on the penalty kill have set Montreal back early in both games. On both occasions, Scott Gomez has been the goat, nullifying Canadiens powerplays in the process. Transitioning from four on four play to penalty kill mode has caught Montreal both times.

Statistically, the Flyers have four goals on the PP in the series, but an additional two goals in Game One came immediately after Canadiens' players left the box. That makes six of nine Philly goals scored with the man advantage accounting the whopping difference in scores so far.

As is the case when a teams trails, risks are taken and defense is left behind. The Flyers have been pouncing on the Canadiens when they gamble, further expanding the scoreboard gap. To narrow it, Montreal must put forth a more concentrated effort in front of Leighton's crease. 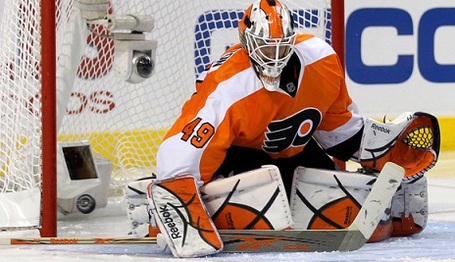 So far in the series, the Canadiens have not been going to the Flyer net with any sustained conviction. They have been firing at Leighton from angles offered them, usually with the second forward setting up in the high slot. Leighton has not had to concern himself very often with the options traffic brings, as Montreal has been making it too easy for the Flyer defense to nullify them.

Additionally, by not charging to the net or crease area with speed or conviction, the Canadiens are not bringing with that effort the penalty calls it sometimes entails. The Montreal power play is a feared weapon that so far has been countered by Philly, but Montreal has yet to enjoy a four on three man advantage.

Brian Wilde of CTV.ca had a bundle of interesting things to say about Leighton, and he points out the fact that the newest Flyer sensation has been tested lightly.

Michael Leighton is not this good, but the Habs have done their best to make him look it. Leighton's save percentage is approaching .970 in these playoffs. He's nailed back to back shutouts, but don't be fooled by the boorish fan base of the Flyers and their nonsensical standing ovations over saves on 50 foot slapshots, Leighton has not done all that much so far.

Perhaps you were surprised to see Leighton earn the first star in both games and hear coach Peter Laviolette note that the Flyers would not have won Game Two without his performance. I thought both claims we're laughable. All Leighton has done is stop what he is seeing. 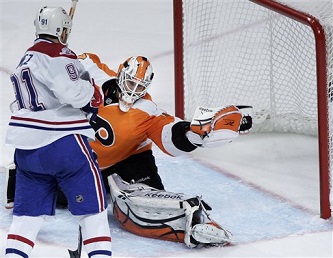 Wilde elaborates on the same points many are making in regards to the light treatment Leighton is getting from the Canadien forwards.

He is not even close to this good. Sure he's big, and solid, and square to the puck. Sure, his strength is his first save, and the Flyers are doing an excellent job of ensuring that he has to make only one every sequence. However, he is a career minor league goalie for a reason. His weakness is his mobility and quickness to reset for a second shot rebound. That has not been exploited even in the slightest. The Habs don't even know whether he can make the second save consistently because they're not getting second shots. Test Leighton on the rebound and you will see he is not prepared for the second chance shot. Give him a steady diet of 35 footers to direct into the corner and sure he is going to look strong. Not a lot of goalies will look weak on non screened, non deflected, long shots telegraphed from Mars. I write down all the big saves that I can use for my highlights from games. My 'Leighton amazing' column is empty. So it is up to the Habs to challenge this guy.

For Game Three, should the Canadiens successfully address the three main concerns, score a goal, and heck maybe even grab the lead, the Flyers will be more severely tested. Judging by how the Canadiens fared in five on five situations in Philadelphia it would simply be a matter of a few created breaks going their way to make the series closer.