Share All sharing options for: A Second Philly Whitewash - Habs and Habs Fans Searching For Answers 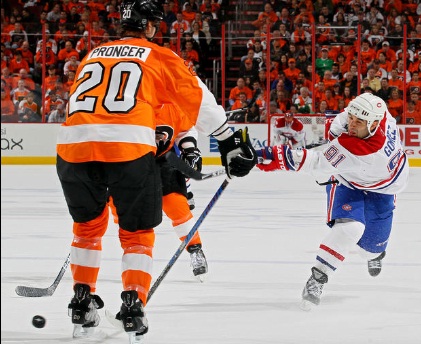 The Canadiens backs might not yet be up against the proverbial wall, but their butts are about to kiss gyprock.

A 3-0 loss and a second consecutive shutout on Flyer turf sends the Habs back to the Bell for the first time in this post season down 0-2. Having been outscored 9-0 in two games leaves little reason for optimism.

They are in dire straights, the sultans of squat, and how they deal with this, will define their season.

No one will argue that the Canadiens played much better in Game Two. By all accounts they held the play for longer stretches, won the majority of faceoffs, committed less turnovers than the Flyers and outchanced them over the course of the game.

Could it be reasoned that the Habs played twice as good as they did in Game One because they doubled their scoring chances close in, while allowing half as many goals?

That outlook might constitute living in fantasy land. These games have not been close at the final siren. It's no as though Montreal are losing by the hair on Kate Smith's chin.

This team needs to score a goal for heaven sakes. It doesn't matter if it goes in seven ricochets off of an elbow pad, they have to get one in, ugly or not. The perfect play, after two shutouts, no longer exists.

Theories abound, as to why the Habs find themselves in the predicament they are in.

Not often do I watch games in the company of friends who may distract my concentration on the television screen, but for reasons I will not explain, I had no choice last night. So I accepted an invite to a nearby suds fountain and settled in expecting a different experience.

Three friends, three different theories, not counting my own.

The first, Jeff - a Habs die hard, blamed goaltending, but not until the third Flyer goal, mind you.

My reaction to that was immediate.

"Yeah, right! Blame the goalie when it's three zip. That's getting to the heart of the issue, isn't it. Hockey's a team game, and where were his mates on the others?"

The answer, was another beer.

The second theory, was less pointed. It came from a non Habs fan, not a hater of Montreal but a guy who knows his hockey from having coached it. I don't know for how long, but Guy made sense while outdrinking us all.

His view was that the Canadiens were not engaged in playing in the trenches. He noted several times, as it happened, when the Habs entered the Flyer zone, and immediately became fancy, looking for the perfect play. He felt that the Canadiens would bet be served by dumping it in, and hitting the Flyer's zone with more speed.

I agreed somewhat, especially on the fancy schmancy. The Flyers are just too positional and dedicated for any sort of trickery to work.

The third theory, from a friend named Paul who I have known since we were eight years old playing the game on outdoor rinks together, pissed me off the most.

Paul thinks all out warfare should be deployed against Philadelphia, precisely meaning that Montreal's tougher chins should bait Philly at every turn to get them off their game.

I pointed out that the Canadiens were already being killed when the Flyers had a man advantage, and that instigating more of the same was worthy of digging themselves an early grave.

That's when Paul and I got into the old size matters versus size does not matter argument.

Now I could not possibly recount all the details of our conversation / argument, but suffice to say that Paul and I are the same age, and have seen the Habs heroics of Henri, Cournoyer, and Naslund over the years.

I will not even get into the theory that so called small players cannot play big games. I agree that smaller players are capable of great games and great things.

But sometimes, it is not simply about one individual or another. The game of hockey, is about teams, one against the other.

The conversation / argument went on at length, and I had three "friends" decidedly against me in opinion.

I got called "smarty pants" and was asked why I thought the Flyers were winning the series.

My answer was a question.

"Have you paid any attention to how good Philadelphia are playing?"

The Flyers aren't giving the Habs much in terms of looks at their net. They are essentially doing to Montreal what the Canadiens did to Washington and Pittsburgh, which is giving them nothing but perimeter to play with.

So far, the Flyers have been almost faultless, and when they've boobed, Michael Leighton's big frame has saved the day.

But Paul, size does matter, and so does endurance. You own a Quickie convenience store, but your ex-wife sells life insurance.

As promised Paul, here's how the two teams measure up, height and weight wise.

What follows is a bunch of comparatives I did not put a whole lot of thought into. I just dropped fact to see where they'd lie.

Here are the 12 Canadiens and Flyers forwards, ranked by order of height from shortest to tallest, with height and weight differentials noted.

Flyers 12 starting forwards are on averge one inch taller than their Canadiens counterparts, but as a group are seven pounds lighter.

Flyers 6 starting defensemen are on average in excess of one inch taller than their Canadiens counterparts, but as a group are twenty pounds lighter. Remove the Pronger vs Gill comparison, and things even out.

Where things get interesting, is in comparables involving top four defensemen versus top four forwards. Generally, these are the in game matchups were contests are won and lost - keep in mind that I have not - and I cannot emaphasize this enough - gone through a detailed accounting of who played against whom, but use your common sense here.

On average, Flyers forwards are two and a half inches taller and six pounds heavier.

On average, Flyers defensemen are two and a quarter inches taller and seven pounds heavier.

A more telling analysis would pit the Canadiens forwards versus the Flyers defense, and vice versa.

On average, Flyers defensemen are four and a three quarter inches taller and twenty-one pounds heavier than Canadiens forwards.

On average, Canadiens defensemen are a quarter inch taller and eight pounds heavier than Flyers forwards.

I've presented some arguments and thoughts I really did not go seeking for. I was hoping to dispell a growing notion inside and be proven wrong, but I'm not sure it worked out that way.

It's your call readers.

I'm off to find some Advil liquigel caps and an icebag.

Your input folks, let's hear it!