Share All sharing options for: Gionta Esteems Canadiens "Aren't That Far Off" 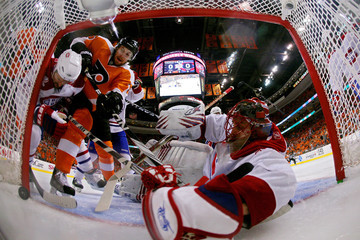 On the day following a brutal 6-0 loss that chased him from the goal crease, Jaroslav Halak was back to being his seemingly unrattled self, looking no more shaken up than he'd been the morning following the opening game loss to the Penguins.

"It wasn't his best game, and he recognizes that," said coach Jacques Martin, "but everyone had an off night, as the score indicates. I have a great amount of confidence in our players and in Jaro. He'll bounce back."

No one was surprised to see the Flyers going for the Canadiens goal crease. Three of their six goals were scored that way.

"They'll employ the same tactic in Game Two," Halak assures. "They will crowd the crease and place players in front to screen. I'll have to do better."

In fact, the team in front of him as a whole will need to perform at a higher standard.

However, Brian Gionta insists upon the notion that the Canadiens were the architects of their own undoing in Game One, and that it's a little quick to point to Flyer superiority.

"We're not that far off," says Gionta, "It's a difficult way to start off, but we're to blame for that, and not a result of something special the Flyers were doing that we were unable to react to."

Gionta, who tried as he might to install himself in front of the Flyers goal and serve them some of their own medicine does not buy in that intimidation or size were factors in Game One.

"It's not as thought we were repeatedly knocked around. We simply weren't prepared," mentions Gionta, who along with Mike Cammalleri, was kept to one shot one goal.

"The Flyers excercise a consistent forecheck and we need to more the puck much quicker in order to force them to skate more. If they are applying puck pressure, one or two quick passes will destabilize them. From then on, they would not be coming at us so quickly."

Not only did the Flyers puck pressure do the Canadiens in, but the Philadelphia power play also left its threadmarks. Dominic Moore admitted that adjustments were needed.

"The Flyers were able to enter our zone much too easily," he says. "Once they were installed inour territory, whoever set up along the boards was given way too much space to work and shoot on goal. But that's part of what needs to be fixed."