Share All sharing options for: Larry Robinson's Heroics and Other Great Moments in the Canadiens / Flyers Rivalry 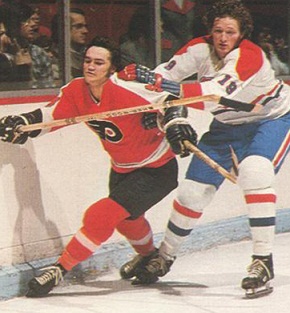 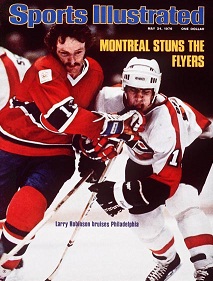 I mentioned in an earlier post that the Canadiens and Flyers own the all-time highest regular season winning percentages so it is only natural that when both teams were at their peak that they would run into each other.

Regular season meetings over the years have had their share of explosions, but it was nothing compared to a pair of series in the late 1980's or in the Broad Street Bullies mid seventies heyday.

Hall of Famer Larry Robinson was no stranger to battles in either of those decades. He was but a young rookie in 1973 with all of 2 goals in the 36 regular season games under his belt. On April 17, 1973, the Habs were playing the Flyers in the second round that season and were trailing 1-0 in games when Robinson played the overtime hero of Game Two. His goal evened the series and the Canadiens won the next three, and went on to beat Chicago for the Stanley Cup.

In the clip below, Robinson describes how he came to score the goal, but what isn't seen is his whacked out goal celebration. As he explained it in "Robinson for the Defense", he'd never scored such a big goal in his career and he had no idea how to react. With the manner in which he began jumping up and down, arms and limbs flailing away, big head of curly locks swaying, it bore a string resemblence to the Sesame Street character "Big Bird." Robinson was branded with the nickname, and he didn't entirely appreciate it! 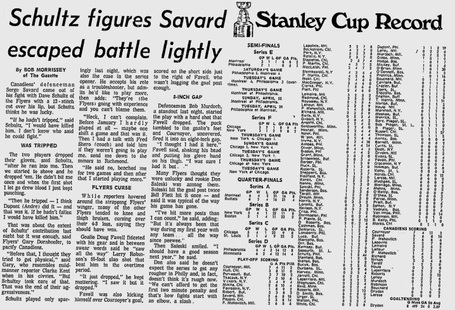 In the 1973- 74 season, the Flyers were on their way to their first of two Stanley Cups, their battling and brawling image firmly cemented in the minds of hockey fans around the league. The Broad Street Bullies were so feared in fact, that players on opposing teams were said to come down with a case of the Philadelphia flu prior to games at the Spectrum.

The Canadiens however, we're not one of those clubs who coiled. With players such as Robinson, Pierre Bouchard, Mario Tremblay, Doug Risebrough and Pete Mahovlich, they were more than capable of going toe to toe and nose to nose with the Flyers, and it happened on several occasions.

The article below, authored by the Montreal Gazette's Tim Burke, appeared the day before the infamous brawl game of February 17, 1974. Click on image to enlargen. 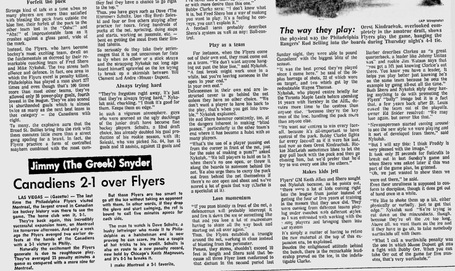 On February 17 the Flyers and Canadiens met at the Forum for the fourth time that season, with hostilities from previous meetings surely in play. The Canadiens were leading the game 2-0, when a late elbow by Pierre Bouchard on Flyers captain Bobby Clarke ignited a period ending, bench clearing brawl.

Bouchard wouldn't have fought with Clarke (he'd have made hamburg of him), but that didn't stop the Flyers pack mentality from kicking in. Soon, one player came to Clarke's rescue, then another. As the benches were emptying at the siren, close to fourty players became invloved in minor and major fisticuffs.

One main bout featured the Flyers leading tough guy, the always terrorizing Dave Schultz. The pugilist, hardly known for choosing his dance partners, was about to become involved with an unwilling tangoist. When Robinson saw this, he let go of the player he had a hold of and moved on to Schultz. Big Bird had less than a half dozen NHL fights to his resume at this point, but after going throught Schultz and administering a fairly one sided pummeling, players thought twice of dropping them with Larry from then on. 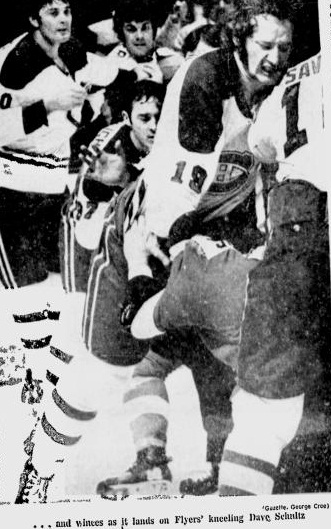 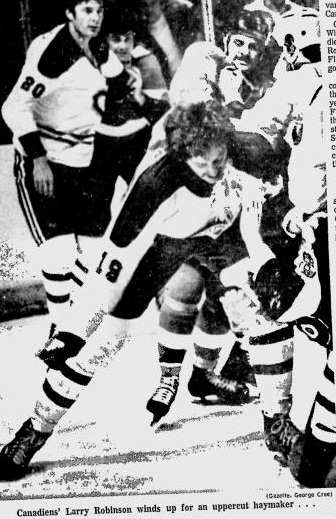 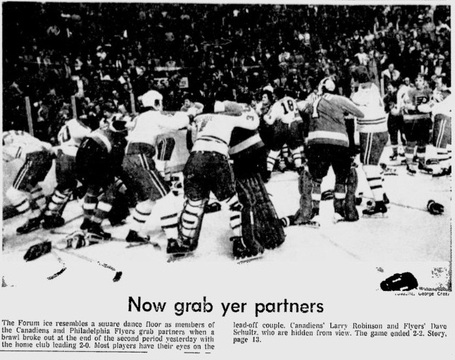 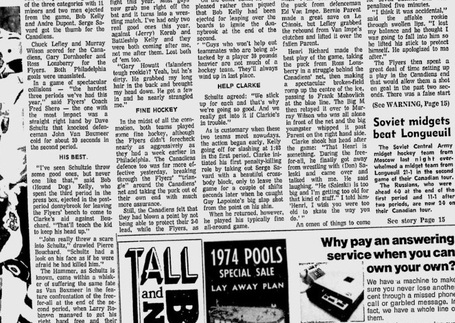 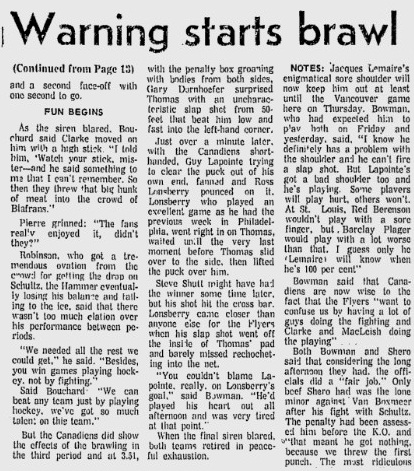 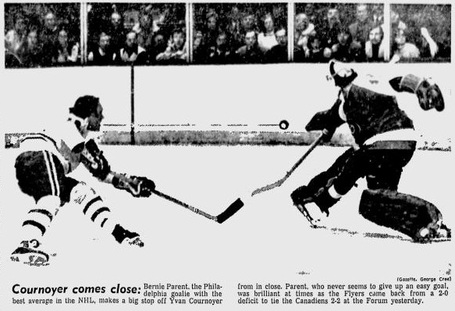 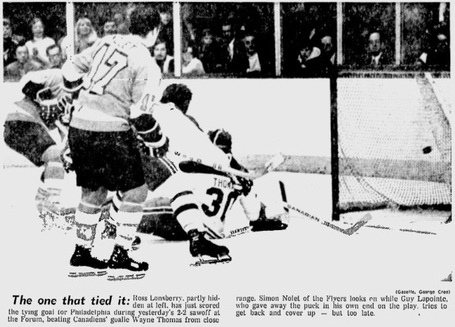