Flyers Deal Canadiens a Swift Kick in Game One

Share All sharing options for: Flyers Deal Canadiens a Swift Kick in Game One

The Philadelphia Flyers pounded the Canadiens into submission in Game One of the Conference Semi - Finals. It was an ugly 6-0 one sided win.

If you were a Habs fan tuning in and waiting for a hockey game and your team to show you probably feel as though you've been stood up like a groom still waiting at the altar.

How to explain such a debacle?

In this post - season, the Canadiens have put forth a couple of real stinkers against the Capitals and Penguins, but there were traces of effort in those loses.

Against the Flyers, and not to discredit them by any means, the Canadiens rarely made the opposition sing for their supper.

After a first period that ended with Montreal outshooting the Flyers 13-6 but trailing 1-0, there was reason to believe the Canadiens were poised for better things. There were few ominous signs of doom, but such hope evapourated rapidly in the early moments of the second period.

Cumulative errors had a domino effect, and Montreal were sent reeling, wondering what had hit them. They never recovered.

It is in fact impossible to speak of what they did well because there was zero to nothing doing.

Montreal were unfocused on all 200 feet of ice, passes were soft, individuality reigned over team play, trios were out of synch, the defense worked alone and communication seemed to find an abyss.

The Flyers for their part, only needed a semblence of alertness to claim this game, practically handed to them as it was. Playing a very solid game, they were in position and on the ball everywhere the Habs goofed and platters were served. 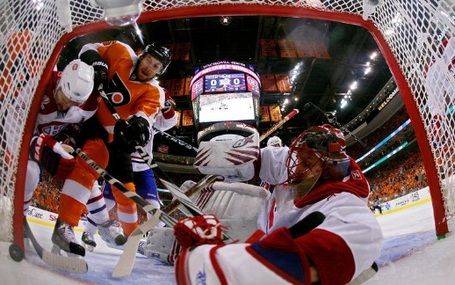 We've seen all types of officiating in these playoffs, from terrible to incomprehensive. It could be invoked as a reason, but tonight's crew lead by Bill McCreary were so tight on things that every fire was put out at the first sign of a spark. The Canadiens in this, seemed uncomfortable and ill prepared to play in a game where things would not be let go. It's hardly the first time this season that we've seen the Habs hesitant and stiffled in such an environment.

The officials controlled a game that could have gotten out of hand quite quickly, dealing with the usual instigators named Carcillo and Lapierre in succinct manner. Pronger and Gomez as well, were nabbed for each indiscretion. The Flyers got the message, and it changed little of their game. Montreal repeatedly burned themselves with stupidity time and again.

The worst part of the whole game, is that it looked like the Canadiens were disorganized and without a plan or clue as to how to take on the Flyers. They had looked equally baffled in Game One of the Penguins series.

It's hard to single out players when the entire team as a whole played poorly, but Scott Gomez, Marc-Andre Bergeron and P.K. Subban have certainly had better nights.

Gomez was absent minded, soft and belligerent. His passes were ineptly soft, and his plays carrying the puck were completely out of synch with teammates.

Bergeron at times looked freaked and afraid to be playing Philly, turning over the puck and rushing all he endeavored. He was conspicuously in jitterbug mode on the power play, where he best serves the team. 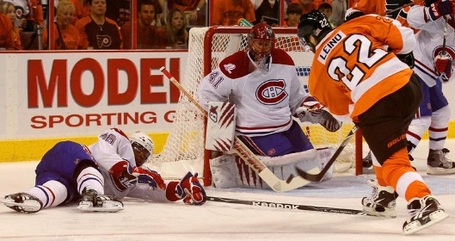 Subban led all Canadiens in ice time (25:04) but made grave errors on the first two Flyer goals. On Coburn's marker, he attempted to mimic Hal Gill doing the coucher on the ice, but with a bad fall and shot that could have caught him in the face, he went fetal. Surely there's better ways to counter a shooter. On van Riemsdyk's goal, he took his eyes off the puck he was about to swat and it headed through his legs straight to the goal scorer. Not pretty, but it to be expected that Subban would play at least one game wherein he would look like the rookie he is.

Jaroslav Halak has a very ordinary night, left alone to fend for himself by his mates.

Flyers goalie Michael Leighton had an easy night of it, stopping 28 shots for a sweatless shutout, the Canadiens rarely making his existence difficult in the manner the Flyers crowded the Habs crease.

If there is one good thing about this game for Montreal, it is that the lame effort came about in the first game of the series and not later. There is much time to recover, and recovering and adjusting is something the Canadiens have done well of late.

The Flyers have been masters of adversity this spring, and the Canadiens have also shown signs of defiant resilience. The series will not be representative of the first game.