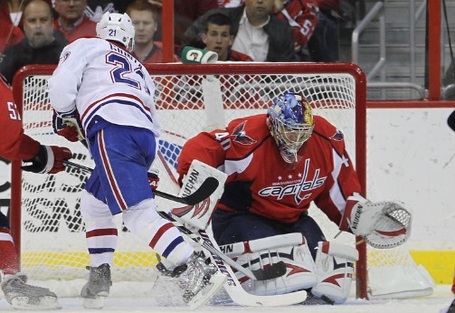 Here are the goal breakdowns from the final game of a historically surprising series.

In the round, the Canadiens were outscored by Washington 22 to 20. Discounting three empty netters, the teams totalled 39 goals scored that have been detailed here in the past two weeks.

The goals scored, of course, were but part of an entirely larger story in a series in which the Canadiens were vastly outshot and at times tremendously outplayed. Montreal however, displayed a different game in their four wins than they did in the three losses in which 17 of those 22 goals were scored upon them. That is not to suggest that the Habs game plan was any different in the losses, only that circumstances, such as taking the lead, drastically affected the outcome.

Before and during the series here, I twice posted on the Canadiens ability to play with the lead against Washington. It proved true against the Capitals during the regular season and the tendency continued during the playoffs. The fact that Montreal are an entirely different team when playing with the lead is hard to dispell. A look at this during the regular season can be found here, with the second playoff entry after Game Six is linked to here. The tendency continued in Game Seven, with the Canadiens holding a one goal lead from late in the first period until the game's end.

Chris' analogy to a Mohammed Ali boxing tactic is spot on, as he points out how the Habs worked the Capitals worst tendencies against them. A deeper look at the success enjoyed by Jaroslav Halak in the round, the encapsulation summarizes that the Canadiens play as a team in their own end was the ultimate key to defeating Washington. If you missed it, take a second look here. The article includes links to all seven series games and their individual goal breakdowns.

The Canadiens are on a 4 on 3 powerplay, as Plekanec and Morrison had gone off together at the 18:00 minute mark for roughing and Mike Green was called for a crosscheck at 19:18. It took Montreal 12 seconds to score, after winning the draw and keeping the puck in the Capitals zone. Markov passes to Gomez at the left side boards and he positions himself, waiting for the lane to Bergeron to show itself. With a second or so of patienting, that lane appears and Bergeron fires a laser beam past Varlamov with Gionta standing on the edge of the crease.

In twelve seconds, they showed the patience and poise to set up the play they wanted. Once the opportunity was presented to them, they wasted little effort in capitalizing.

Green's penalty for starters was completely stupid on his part. On the PK, the Capitals triangle setup did little to hinder the threat of the Bergeron shot. Going with two forwards and one defenseman is questionable, especially as the triangle was backed in on itself and two players were at Gionta rather than having one focus on Bergeron. With a small triangle setup in T form instead of a bigger spread out, made the Bergeron option obvious and dangerous. 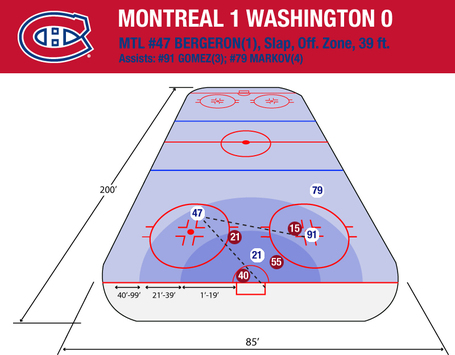 From a Hal Gill dump into the Caps zone late in the period, Maxim Lapierre raced Mike Green to the puck and won. Green takes Lapierre out some, but never manages to touch the puck. The Lapierre drawing over of Green creates the loose puck laying in wait for Dominic Moore, who jumps on it unattended. Moore swoops in on Varlamov from the side and pops one far left corner.

Speed and a two man forecheck caught the Capitals sleeping late in the game. Lapierre burst from the Habs end to outrace Green and used his stick to sweep at it when Green did. As both sticks came in contact with each, the puck never changed position.

Both Moore and Lapierre bypassing John Carlson, who had the best ticket in the house. Carlson's non reaction to a pressing situation created Moore's opportunity. No Washington forward returned to help, all three being caught off guard or out of position by Moore's placement and Lapierre's speed. Only Knuble arrives in time to watch the puck go past Varlamov. 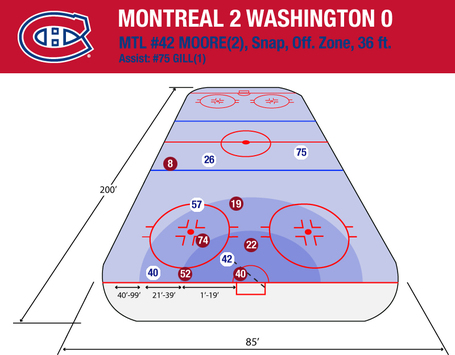 A little more than a minute after the Moore and trailing 2-0, Washington have four forwards on the ice and are poised to pull Varlamov. Backstrom carries the puck over the Montreal blueline with ease. He rounds Cammalleri and passes to Laich at the left point and heads to the net. Laich floats one at Halak and follows in for a chance at the crease. Plekanec clears the bouncing puck directly to Ovechkin, who throws a handhander on the net. The puck hits Semin at the edge of the crease and bounces to Laich, who spikes it past Halak.

The Capitals charged the Canadiens net in an outmanned situation and were in position to gain the puck off two bounces. Semin and Laich both managed to get behind Gill and Gorges, who were no help to Halak on the third rebound.

Just about everything. An untimely line change lead to Washington outmanning Montreal at the worst of possible times. Cammalleri was soft on Backstrom and should have gone for hit or a bump rather than a sweep at the puck. Halak could easily have frozen the puck on the Backstrom shot, and had better control of a fat rebound. As the Caps charged the net, Gorges becomes too focused on the puck and reactes late twice, the players around him. Gill takes Backstrom out, but Andrei Kostitsym, who came on late for Gionta doesn't bare down on Ovechkin like he could have. With Semin and Laich behind the Canadiens defense, Halak was helpless. 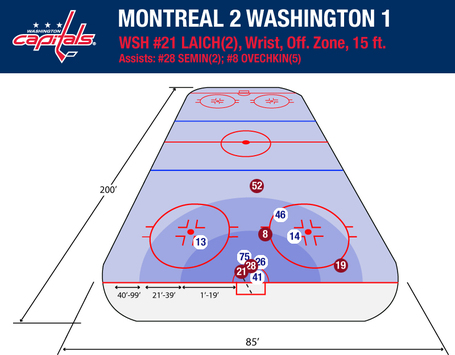 Three goals in a tight game all scored because of terrible errors, and often multiple errors made on the same play. On the Bergeron goal, the stupidy of Green taking an offensive zone penalty in a one on one situation cannot be overemphasized. He was like the worst major player of the series.

The second Canadiens goal was typical of the hustle shown by the Habs grinders in the round. It has often been mentioned that the Canadiens won this series because of Halak's stellar play, the shutdown effort by the Canadiens powerplay, and the strong showing of Gill and Gorges, especially in blocking shots and lanes against Ovechkin and Backstrom. Underscored in the series was the Canadiens depth coming out ahead and the team's propensity for gain the lead, early in most cases, in five of seven games.

Oddly, the lone Washington goal in this game typifies what they did not do enough of in the series, which is attack the Canadiens net with reckless abandon from all angles.

Apologies for the lateness of the Game Seven post. Work commitments and all that stuff.... The first game of the Penguins series should be up before Sunday morning.

Here are the goal breakdowns for games One, Two, Three, Four, Five and Six of the series.