A Game Plan Goes Awry, Habs Gets Rolled In Raleigh

Share All sharing options for: A Game Plan Goes Awry, Habs Gets Rolled In Raleigh

All fans surely recall the date four seasons ago - on April 7, 2007 - in which the Canadiens' season ended in a 6-5 defeat at the hands of the Toronto Maple Leafs.

I know you did not need reminding.

Although only Andrei Markov, Tomas Plekanec, Maxim Lapierre, Andrei Kostitsyn, Jaroslav Halak and Josh Gorges remain from that club, the Canadiens were all too aware as well.

So, lo and behold, what we've all dreaded happening is about to play out, only this time it could be a whole lot uglier, as the game in this instance will be at the Bell Centre.

Pull the hands from my face when it's all over.

There are games when I truly do not know what to make of this Canadiens team. In fact, it has been a season in which I've thought that almost constantly throughout.

At times, this team shows flashes in streaks, wherein the coaching seems to pull all elements together brilliantly and everything flows smoothly as it should. The remainder of the time, it all goes out of whack and looks desperately helpless.

In sum, it is chronic and uncohesive, and now it is down to its last chance against Toronto.

I'll spare you a full blown season analysis for now. There will be a time for that soon enough, I'll also spare you a rant on Martin once again, as this time round, I think he at least tried to push the right buttons, almost at the right times.

An examination of the 5-2 loss to Carolina could easily turn itself into a full blown autopsy a la murder by numbers. The Hurricanes, in fact, did not kill the Canadiens, one patient blow after another. Montreal just shot themselves in the foot repeatedly and bled to death slowly over 60 minutes.

Increduloudly, in a game so pivotal, the Habs made so many mistakes it was astounding.

Watching the game in disbelief, I lost track (after seven) of exactly how many outmanned breakaways the Canes had on Jaroslav Halak. To make matters worse, Halak was up to stopping the Carolina rush on three of those that counted for goals, but coverage of the Canadiens trailers broke down as well, as players stopped skating or simply failed to realize the red jerseys swarming around them. Talk about handing a game away.

Clearly, the game plan called for the defensemen to pinch and assist forwards in the Carolina zone. What was evidently forgotten in this mandate, was to do so in pressure situations where options were assured and coverage accounted for. Didn't happen.

The breakdown on the goal breakdowns, is as follows.

On Carolina's first, O' Byrne did not pinch, as was stated on the RDS broadcast, he was simply working at keeping the puck inside the Hurricanes end. He did so once, but his second attempt was pushed out. With Andrei Markov out of position, a clear break was created for Chad Larose, who'd slipped unsuspected behind the Canadiens defense. Markov managed to give strong pursuit to Larose, and Brian Gionta doubled back in time to thwart Jussi Jokinen, but both O' Byrne and Benoit Pouliot were guilty onlookers inches away from Eric Staal, who shuffled the rebound past Halak.

On Carolina's second goal, a turnover was created deep in the Hurricane end, that led to Larose's breakaway goal. On the play, Markov took the puck from the left point, and with a man crowding Cam Ward's crease, chose not to shoot from 40 feet but instead drove to the net, reeled back and passed to a completely covered Gionta. The bad read caught O' Byrne far to the right side and flatfooted. Gionta was alone in giving chase. He dove, tripping Larose slightly (the ref's arm went up) who scored anyway.

Martin then called for a time out, and as RDS noted, seemed to put himself in mute as soon he looked up noticing cameras on him.

Seven minutes later, in the middle of the second, Gionta made it 2-1, springing some hope, but the Canadiens failed to reel in the same mistakes that lead to Carolina's first two goals.

Early in the third, Staal struck again, when left alone and uncovered by Scott Gomez during a powerplay. Gomez was covering the left point, when Staal eased behind him unsuspected and burried a cross ice one-timd feed past Halak.

Fate be it, this would not be the goal that broke the Canadiens back, as only eleven seconds later, Marc - Andre Bergeron made it a one goal game once again, with a blast that beat Ward from just inches inside the blueline. A lucky goal of sorts (Bergeron was 1 on 4, essentially) it was the break that the Canadiens needed, but it failed to yield any calming effect. 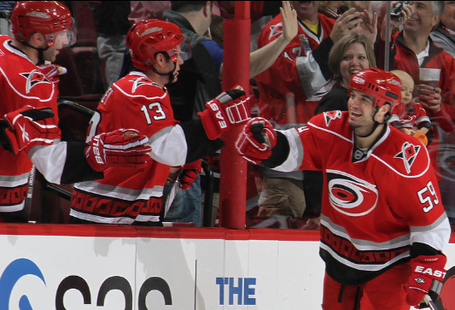 On Larose's second and the Canes' fourth, Markov was slow to react to deep Carolina possession, and augered at their blueline, saw all of a breakout pass, Larose and Staal blow by him with only Bergeron back on the two on one. As Pouliot is unable to catch Larose, he burries Staal's rebound to make it 4-2.

Make that three of four Carolina goals created from odd man rushes originating inside the the Hurricane end.

Gloomy, to say the least, and something to consider for folks like me who bemoan when the Canadiens let themselves be outshot 18-2 in third period in order to hang desperately onto a one goal lead.

Such would have been sheer jubilation last night, but then the Habs blew their wad with a whole lot of high risk / high reward hockey in which they never gained a lead.

The bugging thing is, I don't understand the approach, in Game 81, when a single point is all that is needed to clinch a playoff spot. The panic button stench of it is, the Canadiens methods seemed to be playing straight into the hands of a team with nothing to lose. Not only was the whole approach uncohesive and without unit of five structure, it lacked patience and confidence. 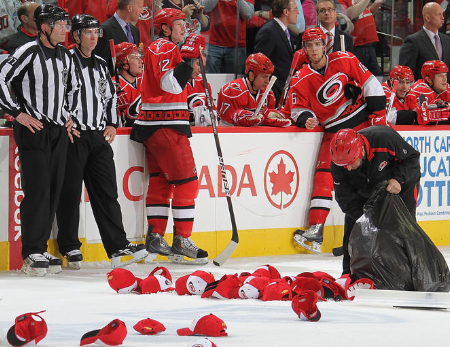 For encompassing explanations for it all, admittedly, I'm at some loss. Readers are well aware that I've been all over coach Martin's lackings of late, but for this one, I have to say that some of the thoughts I've ranted on, he actually put into practice for this game. Of course Martin doesn't read hockey blogs anymore than I read Chatelaine, but last night he called a timeout appropriately (not sure he used it to effect) and did shorten his bench midway through the game, to some effect.

Where Martin perhaps got blinsided, was in the assessment of the Carolina defense, who do not have a veteran of more than one complete season other than the stable Brian Pothier, with 360 games, about six seasons, under his belt.

This is where the Habs pro scouting comes in. Who are, and how good are, these players we knew little of.

If you have not clicked on their individual links, I'll spare you the math. The have played a total of 167 NHL games between the five, an average of 31 games each.

Is this not to be a weakness worth exploiting?

A few games ago, the Canadiens were beaten, almost singlehandedly by a stellar Cam Ward, who saw most shots fired at him in that game.

Before the game, I related to friend, that I was concerned with the Habs' sitting Mathieu Darche, a noted creator of crease havoc, in lieu of dressing Bergeron as a seventh D-man.

Yes, MAB scored a goal, but the Canadiens had little crease presence other than on the Gionta goal and a few Travis Moen moments. But pinning the Canes at their net, tight in, should have been the ploy.

It wasn't, and instead Carolina was able to expose Habs anxiousness as a weakness. Right at their pinching blue line.

It's a bit of a mental warp, but teams with great defiencies in one particular area, can almost expect (predict) opponents to attempt to exploit such a weak spot.

Last night, Jacques Martin and the Canadiens did so, unconservatively.

The price, we will learn come Saturday.