Share All sharing options for: Gordon Outcoaches Martin, As Habs Flatlined By Islanders 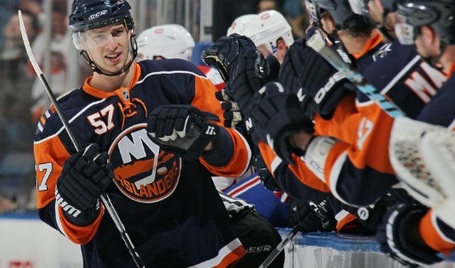 I heard it rumoured on radio station CKAC early yesterday that Canadiens forward Dominic Moore had a clause in his contract, one signed with the Florida Panthers, that pays him an additional $500,000 should he help his team to the post season. That clause, as any such clauses in a contract, would be transferable to the Canadiens in the event of his trade. If this in fact is true,it would go a great length in explaining the hunger and determination by which Moore plays every single shift.

As a disclaimer, I have a reason to doubt that such a contractual stipulation can still exist with the rules of the current CBA, which I believe bars such things in all or most contracts. Nevertheless, for now, I'll simply pretend that Moore's clause does exist, by way of making the following points.

On the New York Islanders team, there are currently about 15 players, most of whom were dressed against the Canadiens last night, who have no contract for next season. They too, like Moore, are hungry and determined, playing with desperation that is tied to their hockey futures. In a game that would otherwise be meanlingless to those players, other than the above stated fact, the Islander crew of castaways and potential keepers seemed better prepared for this so called nothing game, than many of the Canadiens players, looking a playoff berth square in the eye.

That is terribly concerning. 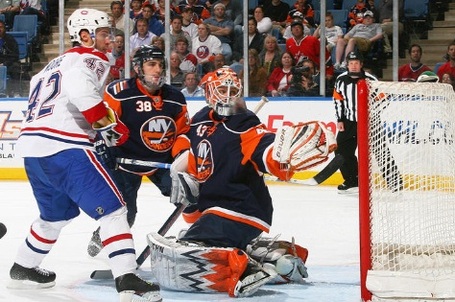 If anyone has watched the Islanders of late, they are not playing like the pre-billed patsies they were advertised to be. Since the Olympic break, they have beaten the Blackhawks, Devils, Canucks, Flames, Flyers and Senators - no light task. They are an up and coming team that includes several promising players, and what is on the line for them at this moment is that many of them wish to remain together and on NHL contracts next season.

Many players on the Canadiens side have no such contract and future concerns, they were simply playing for their playoff lives.

Now don't get me wrong, the Habs desperately wanted to clinch tonight, perhaps even more badly than anything the Islanders wanted. But at times, especially the first period (and lapses in the third), the Canadiens played as though it was already in the bag. The Islanders got the step and charged out of the gate, and for twenty minutes the Habs were likely wondering why Washington were wearing such ugly jerseys.

Point blank - Montreal were not prepared to start this game with the requisit hunger. On a team with a great many generals but no real commander, it falls to the coach to direct and prepare the troops, whip them into a frenzy. 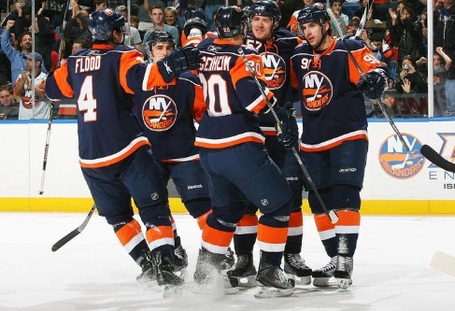 Maybe you caught Islanders coach Scott Gordon behind the bench of his team, a ball of kinetic energy, patrolling the tight walkway space and invigorating his charges with instruction and inspiration. There seemed to be little that was imminent that decried Gordon's mannerisms, other that perhaps he really wanted the win.

There is an old ideology - I call it a bullshit spin, personally - that coaches trod out this time of year, saying that it is too late in the season to make changes and bring new ideas and plans to players and a game. While it is perhaps sensibly based in the notion that a team cannot alter its system in game number 79, it is unthinkable that bringing in particular twists or tactics of motivation will not work. Coaches often say that at such a point it falls generally on deaf ears. I don't buy it.

Another mantra that grinds at me is when coaches suggest at this time of the year that preparation is concentrated mainly on the team itself, more than the oppenents they will face on a nightly basis. If that is so, it's a sad notion to think that an opponent is taken that lightly. I don't believe it, and I'll call spin on that bluff too.

What I do suscribe to, is that a passive coach leads to a passive team, and I've ranted enough about Jacques Martin being an icicle of creative thought behind the Habs bench for weeks now.

When big games are on the line, a predictable team becomes a beatable one. A team with no options for creativity digs its own ruts, and in almost every game the Canadiens play of late, they manage to go a good stretch in which they are badly outplayed and appear dismally out of synch.

That happened from the puck drop against the perceived lowly Islanders. 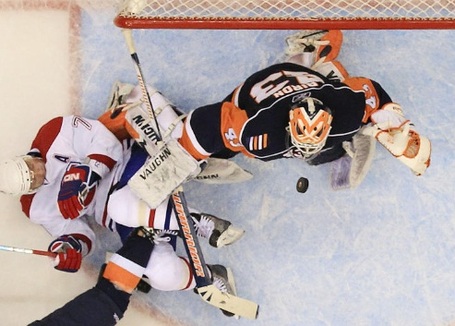 One facet of hockey that will never change is that teams play differently when ahead or behind. Possibly the most unreversable statistic in hockey is that of the team scoring first having the best chances to win. Martin - a defense first coach, in denial until the end - has built his entire system around the one goal lead theory.

Think about it - when the Habs do not have a lead, what does Martin bring exactly.

Does he regularly break up a line at the expense of another, in an attempt to adjust to, or enforce the tempo of play? Is he known for shortening the bench at any given moment in order to skew the roll of lines from his counterpart?

We could ask similar questions of this type all day, but all the answers would be the same.

No, you can see Martin coming for miles. So badly that even an upstart the likes of Scott Gordon gets the better of him. It's become downright embarrassing to witness.

Perhaps you're thinking right about now, "Hey, wait a minute, the Canadiens twice regained the lead. That must be worth something?"

Yes, kudos to the Habs players for twice finding ways to pull ahead, but truly, the Canadiens are the stronger team in every regard, and should have won this game, especially with a better start.

Anyway, nevermind that they twice regained a lead, they twice blew it as well. 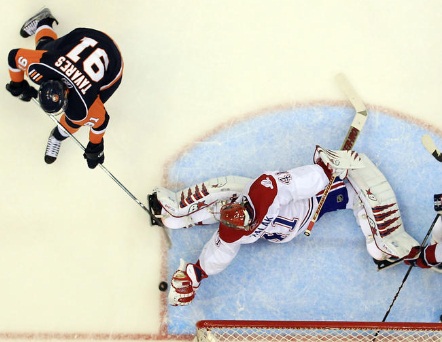 To examine why the Canadiens lost this game is to pay subtle attention to the smaller details that are not working among lines and defensemen.

At forward, two guys having a particularly rough go of it of late are Mike Cammalleri and Benoit Pouliot. It's not lack of effort by any means, it could just be concentration, confidence and plain bad luck. I see no valid reason for a permanent dismembering of trios, but the occasional altering may inspire and rekindle a player and a lumbering attack. It may also force the opposing coach into countering when least expected.

I've expounded on this a bit before. When the team sags a bit, why not can the third line for one rolling, and put Sergei Kostitsyn out with the Gomez line, Moore on the left of Plekanec and drop Moen down for a shift with Lapierre and Pyatt?

I understand that many fans hate the line juggling that coaches sometimes do. Perhaps they can't handle the changes without a scorecard, but if that is so, imagine how an opponent might react to different cards being played. It's what coaching is, in fact. It's a game dictated by, and react to, on the fly.

Montreal don't have line changes, they have assembly lines, the product of which goes dry when the occasional new ingredient is not added.

One of the better Habs defenders of late has been Ryan O' Byrne. It has been noted how confortable he has been of late alongside Andrei Markov, and he seems to be coming into his own on some nights. The Islander game would present a perfect opportunity for him to see some extra ice, yet he was the least used of all Canadiens defensemen with 17:59 of ice time.

Looking at the rest of the blueliners ice time reveals more than a few curiosities. Oddly, Marc - Andre Bergeron played 20:44, a little much for him, but he did come out +2 on the game. Perhaps more troubling - and the absence of Jaroslov Spacek plays into this - is that Roman Hamrlik (24:33), Josh Gorges (24:55) and Hal Gill (21:18) all had more ice time than Andrei Markov (21:09), who had two minutes eaten away by a minor penalty as did Gill.

At near twenty-five minutes, Hamrlik is out a bit much. As he receives both PP and PK time, it might be a thought to reduce some of his man advantage minutes by putting Sergei on the PP point a shift or two. It would go a great deal towards managing more appropriate minutes for Hamrlik, ageing fast and brutally burned on the Bergenheim goal.

On the Islanders side, defenseman Mark Streit played a whopping 31:31. Want to win a hockey game badly, get your best defenseman out as much as possible? How often does Markov's minutes come in so low? 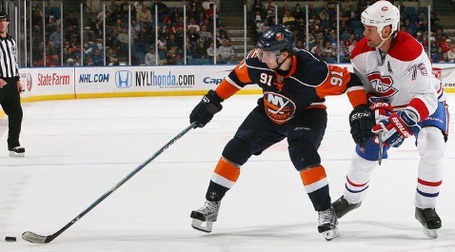 It's no stretch of thought that most players perform better and are more in the game the more ice time they receive. Occasionally, that additional ice time is brought upon by circumstance, and in the Islanders case, an injury to Blake Comeau early in the game forced Gordon to roll with mainly three lines. Thus, the Isles' Tim Jackman and Trevor Gillies got much more pine time than their mates. By consequence, several Islander forwards were given extra work. Kyle Okposo played 27 plus minutes. John Tavares timed in at 23:04 and Matt Moulson at 23:07. The player scoring the crucial tying goal for the Isles, Frans Neilson played 24:54.

The lone Canadiens forward to top the 20 minute mark was Tomas Plekanec, with 21:06.

The third period was a good one for Maxim Lapierre, who scored the Canadiens third and almost potted another moments later on a breakaway. Max earned a total of 10:34 in this game, but that does not explain why Andrei Kostitsyn (17:50), Brian Gionta (16:25) and Scott Gomez (15:32) received so little in a game that had 65 minutes of play. 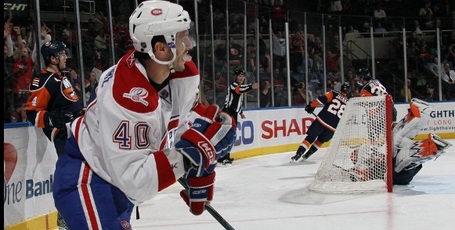 Seems the more this game is examined, the more it becomes apparent that it was lost for good reason. Preparation and adjustment were bungled beyond understanding.

After games, coaches will often explain such performaces by flatly sedating us with the line that the "players did not execute the game plan."

Fans deserve better answers, not one that dumb us down.

Perhaps, "Geez, coach, exactly what was that game plan, and did it invlove not using your better players at opportune times?"

It's as skewed as putting a seven goal scorer out to lead off the shootout!