Not Settled Yet, But Who Is Your Favorite Habs Playoff Matchup?

Share All sharing options for: Not Settled Yet, But Who Is Your Favorite Habs Playoff Matchup? 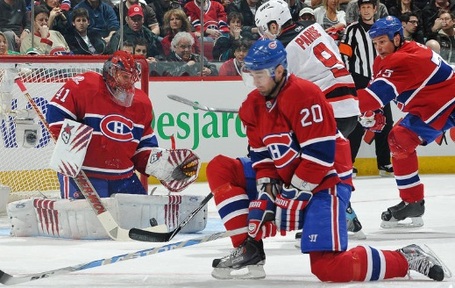 With three games remaining in the schedule the Canadiens can ask for nothing better than the ability to control their own destiny. Point in fact, with their chasers owning no games in hand that would enable them to leapfrog Montreal, and with three game dates against teams out of the running, the Canadiens fate is in their own hands. As everyone surely is aware, Montreal can clinch this evening with a win over the Islanders, combined with loses by either the Rangers or Flyers.

While a playoff position looks all but bagged, you have surely begun wondering what playoff opponent would best suit the Habs if and once the do get in.

As it stands presently, Montreal can finish anywhere between fifth and eight. Fifth looks unlikely, as the Senators need but one point to secure that spot regardless of how Canadiens do. As the Flyers and Rangers meet in a home and away on the final weekend, odds almost assure that one or the other places seventh or eighth. Without delving further into the mathematical complications, the Habs best bet seems to target them in six or seventh. The final spot would not be out of the question should they back in and the Bruins and either the Rangers or Flyers run the boards.

So as it sits, there are four potential first round matchups for the Canadiens, with the Washington Capitals presenting the least likely of scenarios. The remaining three of course, are the New Jersey Devils, the Buffalo Sabres and the defending Stanley Cup champion Pittsburgh Penguins.

Now in saying that the Canadiens and Capitals present the least likely of matchups at this point is rather unfortunate as Montreal, a speed based team in theory, if not always in execution, has held up well against the Capitals this season with a 2-1-1 record. 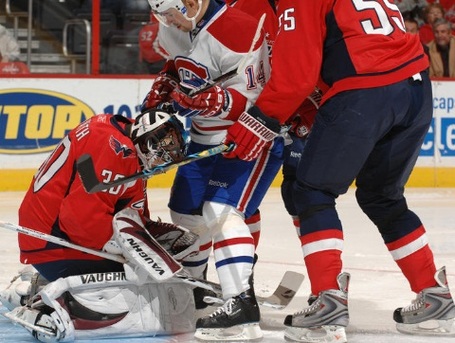 As teams with winning records against the Caps, or even .500 notes against the leagues best club are in indeed rare, what looks to be a barnburner of a series might be put on the backburner until the second round, if it happens at all.

Here is how Montreal fared against the Capitals, with links to the individual games at the Canadiens official site and the winning or losing goalie in brackets.

The Penguins and Devils are currently dead even with 45-26-7 records, slotting them second and fourth for the moment. New Jersey gains the upper hand in a tie breaker scenario, as they have won the season series between the two. Whichever team finishes fourth will likely meet Ottawa, and the team finishing second will earn the seventh seed as a first round opponent.

Considering the Devils have the lighter load as schedules go, it would make Pittsburgh a less likely opponent for Montreal come the first round. 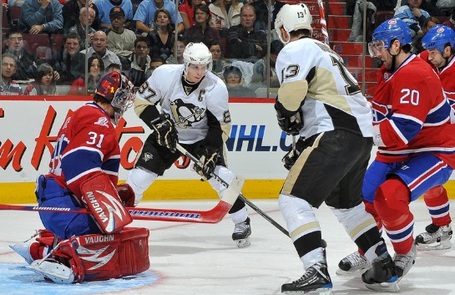 Montreal have been involved in closer games with New Jersey and own a 1-2-1 record against, good for 3 of 8 points. In facing the Penguins, the Habs were slightly less successful, winning their final matchuo to go 1-3-0.

Below is the Habs made out against both.

Against division rival Buffalo, the Canadiens have maybe fared slightly better, especially in the last two recent outings. With a 2-4-0 record, one win coming in overtime, four of six meeting have been close one goal affairs. In many eyes, Buffalo are the favored opponents of Habs' fans, due in no small part to those most recent showings. 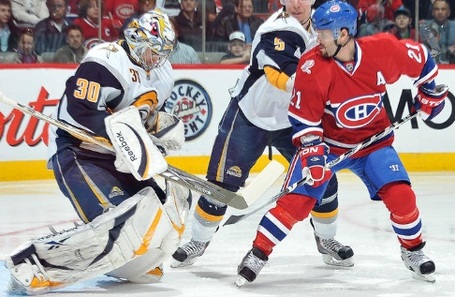 Keeping in mind that the Canadiens are most familiar with the Sabres, it would seem that their best hopes for a first round upset would lie in making a trip to Buffalo starting the second week in April. While I would certainly agree with that assessment and am excited by the potential matchup, I fear that the coach Martin matchup against coach Ruff is less savory than the one on the ice itself. I'll get into Martin's coaching record against his potential opponents as the dates draw closer.

In two regards, the Sabres would set the table for an intersting series. In Pierre LeBrun's column yesterday, he pointed to the Canadiens solid second half record, more specifically it's post Olympic run, in noting that the Habs are well suited to the Sabres. LeBrun even commented on the goaltending matchup, suggesting that if the Habs choose to ride Halak, he is definitely up to Ryan Miller's bar.

The Canadiens have the second-best record in the Eastern Conference after the Olympics. Given the play of Jaroslav Halak, you wonder if the Habs aren't the best bet for a first-round upset, unless, of course, they end up playing Washington. But, for example, if it's Buffalo-Montreal in the first round in the 3-6 matchup, would anyone be that shocked if the Canadiens prevailed? Sure, Ryan Miller is Vezina-bound this season, but doesn't Halak almost even that out? Food for thought. Just look at Montreal's 3-0 win over Buffalo on Saturday for the latest evidence.