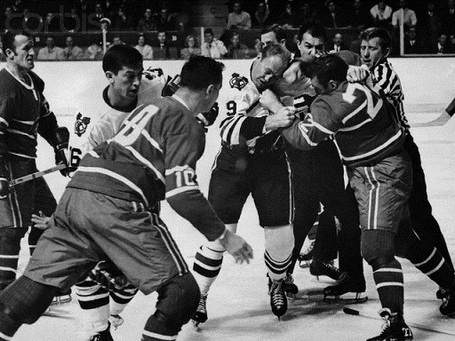 Robert L note: I first posted the genesis of this article back in the sspring of 2007 as the Canadiens season ran down to it's last few games. The scenario then, with only a few games remaining and a last date on the calendar against the Maple Leafs on a Saturday night caused great concern and worry at the time, and brought to mind the final games of the 1969-70 season, when the Habs. That season, an injury riddle one, was decided by a tiebreaker formula between the Habs and Rangers on the schedules final date, it was is often regarded as one of the wildest finishes to a season in NHL history. As the league website has rrun the story today I thought it an opportune moment to update my old post with page scans of the day from the Montreal Gazette. the scary part, is that in some ways, what you are about to read, could well happen once more if the Canadiens are not careful.

While the Canadiens 2006-07 regular-season careened towards a wild conclusion, where the hockey gods saw fit to have Montreal meet Toronto on the final Saturday night, a dramatic finish from an earlier era still percolates in the minds of the former Canadiens players who took part in it.

The drama associated with the swan song of the Canadiens 2006-07 season pales in comparison to the bizarre twisted scenario that was the tension-filled conclusion of the 1970 East Division race. Going into the final day of the regular season 37 years ago, the New York Rangers were 2 points back of the Montreal Canadiens for the fourth and final playoff spot on the final day of the season.

The Rangers were playing host to Detroit in the back end of a home-and-home series in an afternoon game while Montreal was in Chicago later that night.Hall Of Fame coach Emile Francis was behind the bench for the Rangers at the time and has fond memories of what transpired.

Neither will former the Canadiens of that season, John Ferguson and Yvan Cournoyer among them. As with many other Habs of the team, they believed the Red Wings purposely came up lame in the second contest against the Rangers, in order to oust the defending Cup champion Canadiens.

The scenario that begat Ferguson's and the Canadiens' grudge against Detroit started to unfold in Detroit at the old Olympia Stadium, on Saturday, April 4, 1970.

In the 1969-70 season the former Original Six teams were all grouped in the East Division, with the six newer expansion teams taking up the West. Going into the season's final weekend, only 4 points separated the six teams. Each game was of tantamount importance and implication. 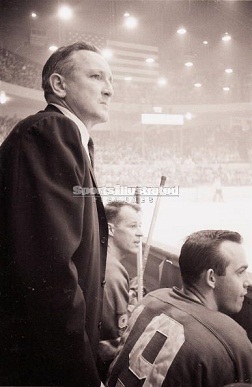 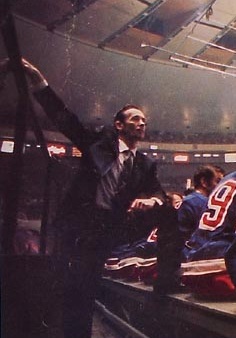 The Rangers played Detroit that Saturday night, with the Red Wings beating them 6-2. The Red Wings players were off to partytime - having clinched their playoff spot win the win.

To celebrate, champagne corks were popped and beers cracked open in the Detroit dressing room.

Nearby, in the losers room, sat an almost inconsolable bunch of Rangers who, with the loss, and with only one game left to go, were all but eliminated from playoff contention.

The two teams shared a charter flight back to New York for a Sunday matinee rematch, and it was during the flight that Detroit coach Sid Abel sought Francis out on the plane and congratulated him on coaching the Rangers to a fine season.

"Sid walked over to me and said, 'It was too bad you missed the playoffs and I said,' Sid this is not over yet. I said we know we have to win Sunday's game,' " said Francis. "We also know we have to overcome a five-goal deficit and we know Montreal has to lose in Chicago." 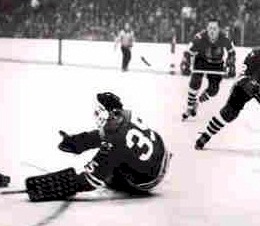 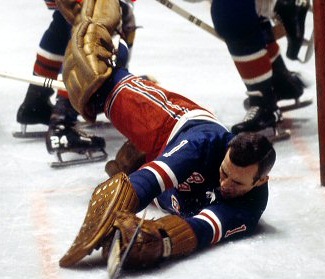 "I looked at him and said, 'Don't bet your farm on it. We are not finished yet. I was so pissed off."

Meanwhile, the party continued for the Red Wings, and it rolled right to the airport, as the team hopped a charter flight for New York.

"I think it was an Air Canada DC-9," says former Wings forward Nick Libett. "There was definitely some champagne and partying on the plane."

How much partying, Libett can't quite recall, though he swears, contrary to Ferguson's conviction, that Detroit did "not surrender the next afternoon because of extreme hangover, but because they had nothing to play for."

Riddle me this, what's the difference?

"It was a meaningless game to us," Libett says. "And we knew the Rangers had to score X number of goals, but I go on the record to say there was no laying down. 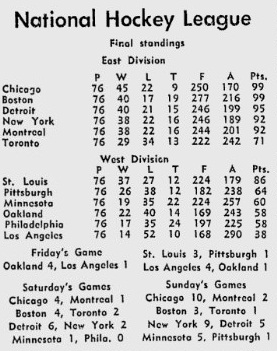 "It was just one of those games where they scored a lot of goals and we didn't."

A Rangers victory on Sunday, combined with a Montreal loss would have left the two teams tied in points. The Canadiens held a 5 goal advantage in the goals for tiebreaker then in effect.

Francis knew the task at hand was straightforward. The Rangers needed a blowout win over the Red Wings and they got it.

"The guys knew if we have any chance at all, we have to come out flying in that first period. We came out quick and by the end of the first period we have a 4-1 lead and it was 7-3 at the end of the second," said Francis. In the third, Francis got his 5 goal margin with goalie Ed Giacomin on the bench. The Rangers fired 65 shots on the Detroit goal.

"I decided to pull the goalie and I told Ed in the intermission he was coming out. He understood and the players all understood. We had the game well in hand. So they scored a couple of goals but we threw all caution to the wind and we threw everybody up. The only person not above centre was the goalie and he wasn't in the net. We won the game 9-5." 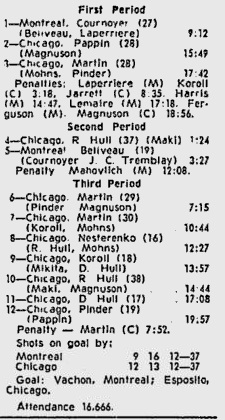 The Rangers were now 4 goals up on the Canadiens, with Montreal in Chicago facing the division leading Black Hawks in the final game with their playoff berth on the line. The Habs would need to win or score five goals in the loss.The Blackhawks also had something to play for - first place - and they weren't about to roll over.

Francis left Madison Square Garden to wait out the team's fate and "got home around seven at night. We could pick up Montreal (games on the radio) and I live on the ocean. I couldn't stop walking. I told my wife you listen to the game and I am going to walk and whenever anybody scores, you yell at me," he said. "So I just kept walking up and down, and she yells Chicago just scored. Then Montreal scored and it is 1-1. Now I am sweating bullets.

"With Chicago up 5-2, Canadiens Coach Claude Ruel, knowing his team was not only being beaten but behind New York in goals scored, pulled goalie Rogie Vachon in favor of an extra forward - just as the Rangers had yanked their goalie that afternoon in order to pile up scores against Detroit. 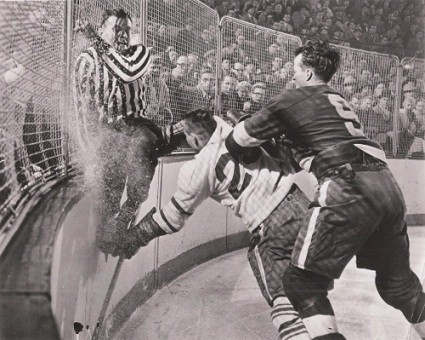 The Canadiens strategy backfired: Chicago's defense backed by standout goalie Tony Esposito held fort, and the Hawks poured five goals of their own into the empty Canadien net to win a 10-2 fiasco.

For the first time in the history of the league, a play-off spot was determined by goals scored. New York had 246, Montreal 244.

In an even more ridiculous oddity, Montreal, the defending Cup champs, had 92 points, the most ever at that time for a non playoff team. It was also more than the West Division champion St. Louis Blues, who topped out with 86. Three sub .500 teams, Pittsburgh, Minnesota, and Oakland, with 64, 60, and 58 points respectively, were in the playoffs.

"It was unbelievable," former Montreal enforcer John Ferguson recalls. "We always thought the Red Wings laid down and allowed the Rangers to score all those goals. And there was a bone to pick between us for years after that." 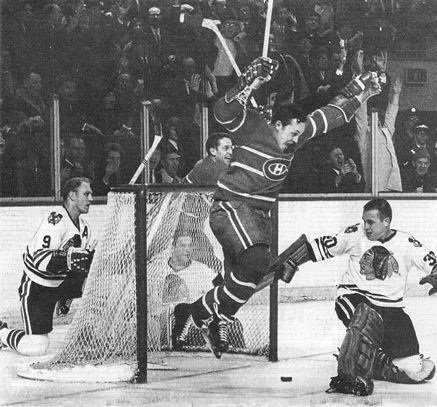 For years, it bothered Ferguson. It bothered all of the Canadiens. An underhanded, dirty rotten, season-ending crosscheck to the back by a Detroit Red Wings club that owed the Montreal Canadiens nothing, but that should have at least possessed the professional integrity to show up in proper form for the final game of the 1969-70 regular season.

The prospect miffed the Canadiens many of them felt that Detroit had rolled over and played dead against New York.

In addition to Ferguson's rants, Yvan Cournoyer added, "That was an awful way for the Red Wings to finish up the season. Those guys have no pride."

His fellow Canadiens felt that many Detroit regulars - aging Stars Alex Delvecchio and Gordie Howe among them-had been used too sparingly. They were incensed when Detroit's Gary Unger cheerily admitted on TV that the team had stayed up late the night before the final game, celebrating its own play-off berth. Red Wing Coach Sid Abel, looking ahead to the playoffs, did nothing to soothe Montreal by acting professionally.

"Why should I tell my guys to go out there and bang their heads against the wall? I can rest my players if I want to. That's my prerogative", said Abel, whose perogatives never included showing up with class on the night in question. 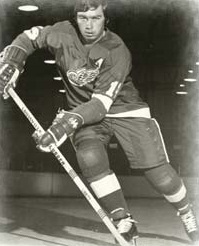 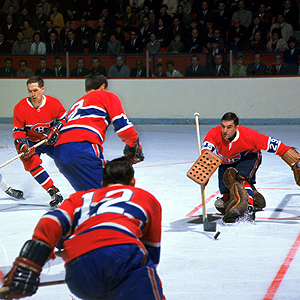 "I don't know how many empty net goals Chicago got on us that night," Ferguson says. "But I think it was six, or something like that."

"That one burned for a long while," Ferguson says. "I guess we eventually made peace with Detroit, though in those days it didn't sit well with anybody." Bunkum, says Francis.

"You can tell Ferguson and the rest of the Canadiens that that's baloney," he says. "That's a lot of crap. Detroit didn't lie down. That is just Montreal's story.

Montreal's story, with 65 Rangers shots notwithstanding!

"The Canadiens had it in their own hands. All they had to do was go out and beat Chicago, and they would have been in, and they couldn't beat them.

"So that laying down stuff, it's a lot of B.S.", says Francis, who really wouldn't know, as he wasn't privy to the Red Wings antics.

Campbell was nonetheless pushed to eliminate the "goals for" criterion as a means of choosing between otherwise deadlocked teams.

"Every sporting event implies an offense and a defense, and in the empty-net games in New York and Chicago, no defense was required. That's not the way to play; I'm not satisfied with the system."

Among the most logical alternatives considered were how the teams involved fared against each other during the course of the season.

Canadiens GM at the time, Sam Pollock, was noted as saying in the aftermath that "if you'd told me at the start of the season that we'd finish with 92 points, I'd have said 'Great! Let's start the playoffs right now!"

If it was any consolation to fans, the Canadiens rebounded the following season to lay claim on the Cup once again - their fifth in seven seasons.

Judging by the former Canadiens comments, the players hardly seem consoled by the lost opportunity.

The fact remains - and the notion could also parallel the 2006-06 edition of the Habs - the 1970 team did not do what it needed to at the time. They left their fate in the hands of others - always a dangerous proposition.

Quotes from the Canadiens players, coaches Francis and Abel, and Nick Libett taken from several sources at Canada.com.

To better view the article below, click on the images to enlargen them. 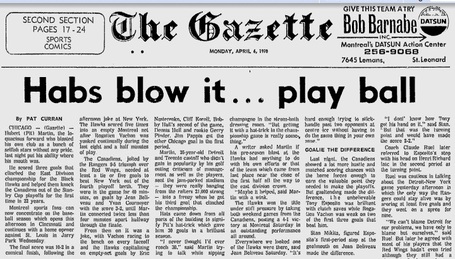 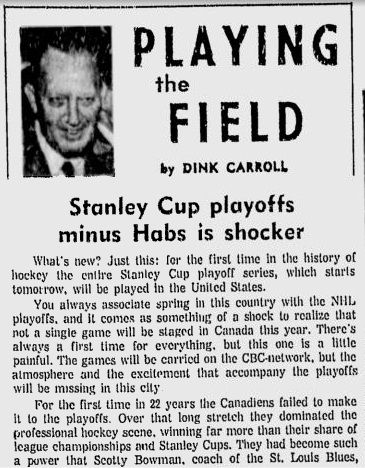 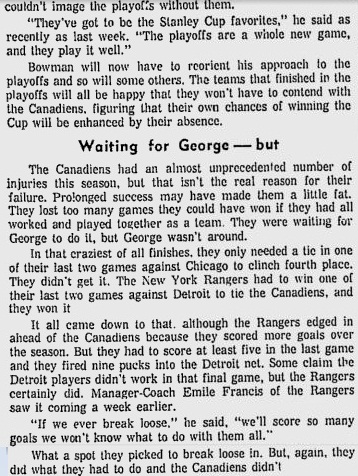 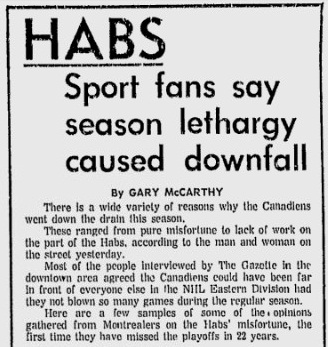 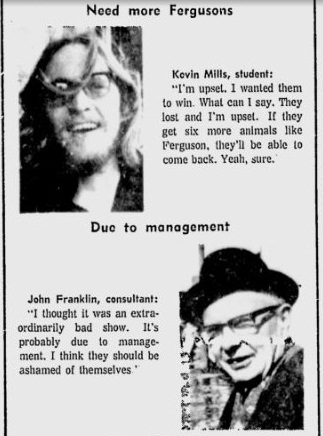 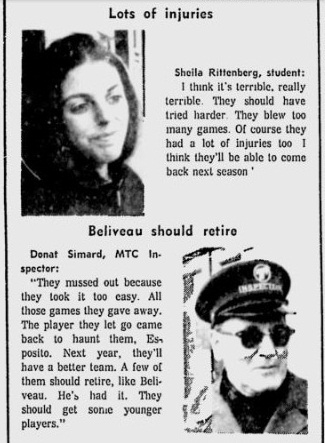 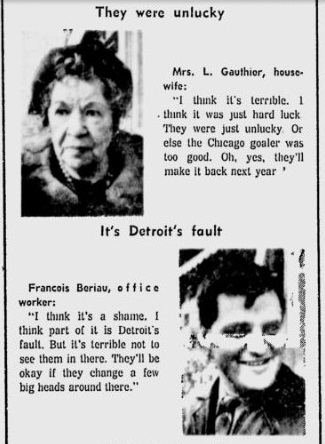 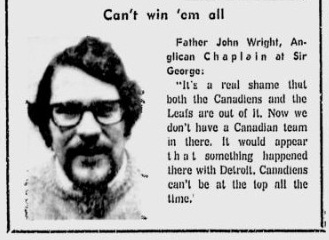 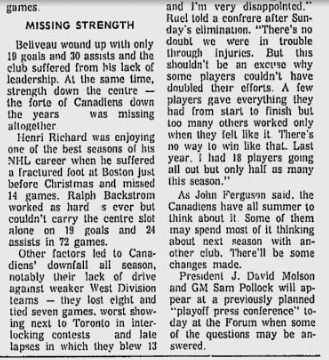