Has The NHL's "History Will Be Made" Clips Forgotten The Habs?

Share All sharing options for: Has The NHL's "History Will Be Made" Clips Forgotten The Habs? 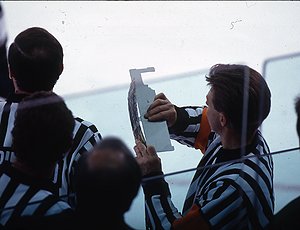 Any hockey fan worth his salt has to absolutely love the NHL's "History Will Be Made" clips that have been running for the past couple of weeks.

The four clips are entitled "What If Bobby Didn't Fly?", "What If Mario Wasn't So Super?", "What If Messier Didn't Lift An Entire City?" and "What If Ray Didn't Believe In Another Year?"

Each clip begins with a rewind from an iconic moment in Stanley Cup history, stopping at a still shot, and then posing the question. There are a couple parodies making the rounds, one involving Sidney Crosby's undoing of Philadelphia in last season's playoffs, from a Flyer fan point of view. It's called "What If Sidney Sucked?"

I was hoping the NHL would make a few more of these, perhaps a couple being Montreal Canadiens related. Not hard to think of what they would be, right? Think McSorley and Cherry!

The titles are no-brainers; "What If Don Could Count?" and "What If Marty Played It Straight?"

Well lo and behold, there is actually a "What If Marty McSorley Wasn't An Idiot?" clip floating around. Another parody I assume, but this one is so real looking, it's uncanny - have a look!

The reason I got thinking about all was that an older Habs fan reminded me of those two heartbreakers from the mid fifties against Detroit, specifically the seventh game losses in 1954 and 1955.

While every Canadiens fan is aware of the five Cups won between '56 and '60, few perhaps realize how close Montreal came to winning eight straight.

In '54 in overtime of the seventh game in Detroit, Red Wings forward Tony Leswick, who had just jumped over the boards, flicked the puck at Habs goalie Gerry McNeil. Canadiens defenseman Doug Harvey, an avid summertime ballplayer, attempted to catch the puck, and it deflected over McNeil's shoulder into the net. The defending champion Canadiens were dethroned.

In 1955, the Rocket Richard suspension played into the Habs losing home ice for last game of the finals. The Canadiens, playing without Richard due to his suspension, had a crucial game forfeited when Clarence Campbell showed up at the Forum, and elicited the infamous riot that lead to the cancellation of the game the awarding of the two point to the Red Wings, which gave Detroit home ice in that final game.

Now, what if Harvey had decided not to play catch?

And what the Rocket had not lost it and gone ballistic, or if Campbell had not been so arrorant and skipped going to the Forum that night?

History was made, and the Canadiens did not win eight Stanley Cups in a row.

The following clip is the Cherry moment, from Grapevine, minus the rewind. The Orr and Lemieux clips follow.