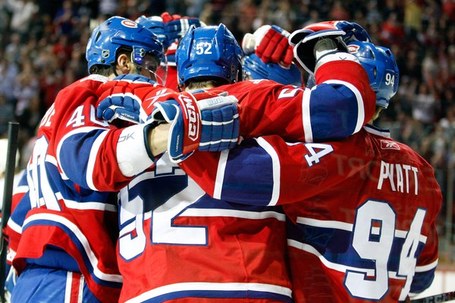 What a difference 24 hours can make, especially at first glance!

One day earlier, the Canadiens finished the Flyer's game practically listless, dragging their tails into the third period as they hung onto a 1-0 lead, stealing the game courtesy of Jaroslav Halak.

Against Buffalo on Saturday night, the Canadiens gained a first period lead and then slowly built on it, continuing with a strong puck pursuit game for 60 minutes. It was an impressive and inspiring display, a full marks team win that righted many of the wrongs from twenty-four hours earlier. By all appearances, the Canadiens looked like they could do no wrong, and that's no illusion. 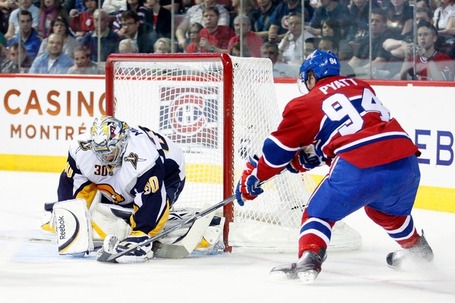 But appearances can deceiving.

Consider the mindset of the opponent. The Flyers on Friday were a desperate bunch, and with the game on line with twenty minutes left, threw all they had at the Habs, and sent them scurrying as they played most of the third period in their own end. Halak's heroics were the story.

Saturday, the Sabres were hardly as desperate a bunch, essentially having wrapped up first place in the Northeast, a win over the Habs clinching that title. How concerned were the Sabres with securing that top spot as soon as possible? Not very, they sat leading pointer Tim Connolly and top goal getter Tomas Vanek, supposedly resting a pair with nagging little injuries as the playoffs approach.

Does that make the Sabres a more docile opponent for one game? In a sense yes, and in another, perhaps not.

Buffalo still play their gritty style no matter the occasion, but sitting two top players does send the message through the lineup that "this game ain't for keeps". It's an inevitable notion players soak in.

Of course Buffalo are a team with solid depth throughout it's lines and pairings, and admittedly Connelly and Vanek aren't the usual thorn in your face suspects, so the Sabres game and mindset is not that drastically altered. Minus the two, there are still eight scorers in double digits on the team, so the depth at the top is not as lacking with those subtractions as it would be compromised on the bottom two lines.

This Montreal win was not brought about by the Canadiens top two lines, although the Gomez and Plekanec trios played extremely well. In this game, the difference makers were the Habs sandpaper crew on the third and fourth lines. 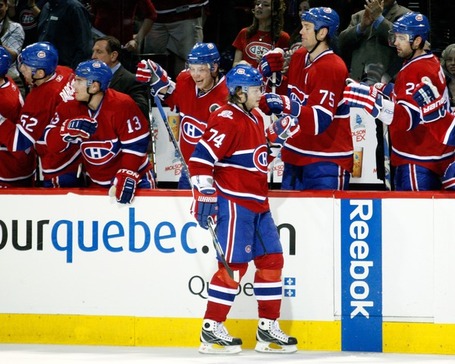 Dominic Moore, Sergei Kostitsyn and Travis Moen have chemistry something special when they are on their game. The line of Maxim Lapierre, Mathieu Darche and Tom Pyatt were energizers, all three playing with the fear that perhaps one of them will sit next game with the return of Jaroslav Spacek to the lineup.

Buffalo's third and fourth lines, made of the likes of Tyler Ennis, Adam Mair, Nathan Gerbe, Matt Ellis, Mike Grier and Tim Kennedy were no match, and that is where the sitting of Connolly and Vanek played into the equation.

Consider that Buffalo, minus their top line center, won only 33% of their faceoffs. The line mismatch showed traces elsewhere. Montreal were credited with seven takeaways to Buffalo's one. The Canadiens shots missed the net on only nine occasions, which must be a season low. 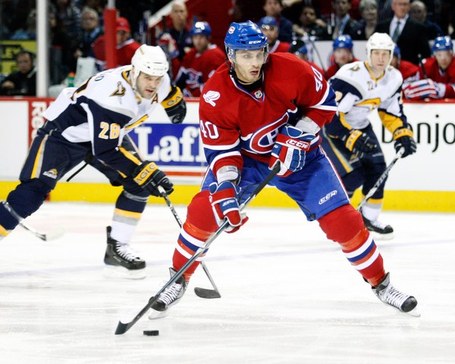 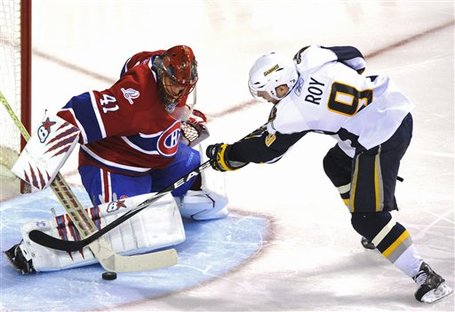 Now if all this sounds like I'm pissing on something, don't get me wrong, of what the Canadiens controlled last night, they did to detailed perfection. In fact, had Vanek and Connelly been present, the Habs effectiveness might just have relegated them to sightseer status regardless.

Montreal, finally, again resembled the team it had been during the post-Olympic six game winning streak. It played together, rather than like a bunch of individuals. It paid attention to recently developed bad habits and reeled them in.

Andrei Markov put in a most concentrated effort. His ill-timed straying removed and his risks better calculated manifested itself into his partner O'Byrne playing one of his strongest games in recent memory. 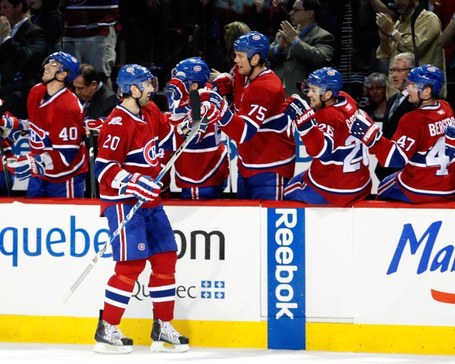 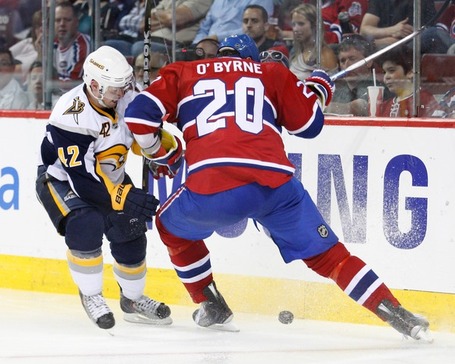 Roman Hamrlik looked more alert and aware than in the last few, likely due to the realization that his partner Bergeron is not the steady Spacek.

Of the pairings, Gill and Gorges are the most dependable, the most atuned to each other's styles. Gill can still handle the puck like it's a hand grenade at times, but the pairing is a composed one.

Against Buffalo, the Canadiens payed both ends extremely well. The forwards were all over the Buffalo D, with one high in hot pursuit, and another backing and ready to pounce. It forced an abundance of mistakes and turnovers, and lightened the load on their own back.

It was as if the Canadiens as a whole, endeared to force their speed on the Sabres with dedicated continuity and relentlessness, wave upon wave. On the turnaround, a forward was always coming back on the play, cutting out the Buffalo odd-man rush with incisive thwart. When that type of system is applied so thouroughly, it negates all kinds of unforeseen trouble.

It essence, all taken together, it was in part what the Canadiens worked against the Sabres in Buffalo over a week ago, that got away from them in the final minutes of the 3-2 loss.

The revalation in this game, was how, in the third period, confiedence in that system application reigned, and the Habs did not buckle and fold.

And that folks, is the best news of all, considering these two teams could be in for a doozy of a first round matchup come next week.