Share All sharing options for: Canadiens Set To Experience Distinction Between Ovechkin's Capitals and Crosby's Penguins

After outlasting the bombardment that was Alex Ovechkin and friends for seven games, the Montreal Canadiens are now challenged with finding ways to come out ahead against Sidney Crosby and crew.

Saying it is an equally monumental task is an understatement.

On the surface, the Capitals and Penguins have similarities, with both teams penchent for putting the puck behind the goal line being a given. But how quickly the Canadiens can learn their newest opponents distinctions from their previous will be key in how well they do in the series.

For the Penguins, assuredly already at work on the matter, will be a crash course in how the Canadiens capsized the Capitals.

Three points of contention for the Habs in facing the Penguins will be Pittsburgh's depth at center, their multitude on gritty forwards four lines deep and a goaltender poised to make a run at a third successive trip to the Stanley Cup finals.

And then, of course, are the player qualities that separate Sidney from Alex.

Oh what fun this will all be!

Across the board, the final notion that identifies the new opponent for Montreal is that the Penguins are team with experience on both sides of the Cup final. They've been there, done that, won and lost. They will not be offering up to Montreal the same mistakes as freebies that Washington's less experiences players did over the seven game course.

The Capitals mistakes were of the unforced error variety more often than not. The difference this time around is that the Canadiens will need to force mistakes upon a more experienced foe.

Down the middle, Scott Gomez, Tomas Plekanec and Dominic Moore will have to contend with Crosby, Evgeny Malkin and Jordan Staal. Throw in fourth line center Maxime Talbot, last season's Game Seven Cup final hero with two goals, and it should be plainly obvious that Montreal will need to be creative and hungry to undo the NHL's strongest middle depth.

Against the Capitals, winger Mike Knuble seemed to give the Canadiens the most trouble, especially around the net and at the back boards. With Pittsburgh, clone Knuble times five, as the Habs will have their faces full of Bill Guerin, Chris Kunitz, Pascal Dupuis Craig Adams and the irrepressible Matt Cooke for the length of the series.

That alone testifies that this should be a battle won or lost in the trenches.

In Montreal terms, that will mean that players such as Moore and Maxim Lapierre are best to continue on where they left off, with killer seventh game showings against the Caps. Travis Moen can be expected to once again see some double duty, shifted from the third and first trios.

Brian Gionta, Michael Cammalleri and Benoit Poulit can throw more speed off the wings than their Penguins counterparts, but that will only manifest itself into an edge if the Canadiens pivots and backline can spring them repeatedly.

In goal, Marc-Andre Fleury is a young veteran who has seen both valleys and peaks. The stopper with the most recent Cup ring still tends to have irregular tendencies, but his propensity for coming back strong after bad goals and games knows no peer. Great goalies, when giving up soft goals, are best said to have the memory of cat in forgetting about them. With Fleury, this is definitely the case, adding in the feline reflexes that come with it.

For the Penguins, it can be surmised that they have spent a good deal of time looking at game films of Jaroslav Halak's performance against the Capitals. Other than a shaky Gatorade bottle, few flaws are to be evident, if the Canadiens defense corps remain his initial wall.

Halak will stop all he sees, along with alot of what he cannot. Undoing him will assuredly be a matter defying the Canadiens defense corps to get a good look at him. Ovechkin would attest that such is easier said than done.

The Canadiens rearguards have tag-teamed roles by committee it seems. The duo of Hal Gill and Josh Gorges earned the greatest of reviews, virtually nullyfying the Capitals power play each time they were dispensed. Andre Markov's minutes have been managed so that his effectiveness is best used against top lines in five on five situations, with power play time left over in his team leading minutes.

The Penguins backline will be a new reality for the Canadiens, after seven games with Washington. The Pittsburgh D offer a great deal less in the unforced error department than the Capitals, meaning Montreal will need to work much harder to create their own breaks.

Sergei Gonchar, Alex Goligoski and Kris Letang are the offensive proponents of the Penguins blueline, and they are most often compromised only with applied pressure coming from two players or more. Mark Eaton, Jay McKee and Brooks Orpik are less flashy, but often more efficient. All three are more experienced than their less than household names would given credence to. 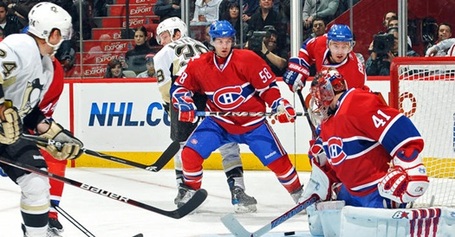 And finally, there is Sid and Geno to deal with!

Malkin is the sleeper talent, Sid is the everpreent lion ready to pounce.

Evgeny Malkin, when countered solidly and continuously repressed, tends to have off games. Canadiens fans might recognize the odd Alex Kovalev trait in him, in the manner that he gives the impression that he is lying in wait, for the perfect time to shine. Considering him dormant is always a grave error.

Crosby is an entirely different animal altogether. The NHL's most rounded talent is a gamer in every way. There are 17,000 square feet of ice on an NHL rink surface, and Sidney excels in most of them. To defeat him, he must be under constant surveillance, and even then you can smell the wheels turning.

On the power play, where Habs excelled against the Capitals, (especially in containing Ovechkin), cannot assumed the same treatment with render Crosby inneffective. Against the Capitals, the Canadiens PK stiffled Washington by erasing passing lanes. Crosby, when confronted with not seeing clear lanes, has the audacity, talent and trickery to create them for himself.

Where a parallel between Crosby and Ovechkin still exists in the Canadiens regard, is that if, and it's a big "if", Montreal can shut down Sid like they did with Ovie in the final three games, their chances of success in the series will be multiplied. 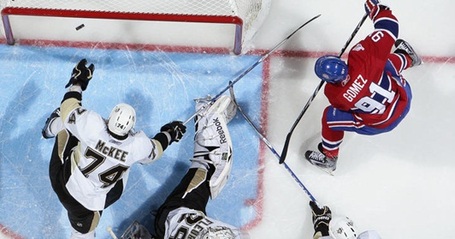 As an added round two bonus, the Penguins lineup contains several Quebec born and bred players, who will certainly enjoy the treat of playing under the Montreal spotlight. Talbot, Letang, Fleury and Pascal Dupuis, not to mention that former Rimouski Oceanic player in the Pens lineup will either thrive or dive as the Habs media ascends upon them.

The notes, quotes, and anecdotes should be many!

If there is one unforseen variable that could turn the tables in the Canadiens favour, it just might be that the Penguins, having gone deep two years running into the Stanley Cup final, might just be burning oil while stepping hard on the gas pedal.

It could be esteemed that over the last two seasons, les Pingouins have played 35 games more than the Canadiens, with shortened summers coming into.

In that sense, the longer the series goes for Montreal, the better their chances.

Predictions are for amnesiac gypsies (the name of my rock band), but I'll go no further than this: Lots of overtime games, and a win in six or seven, one side or the other.