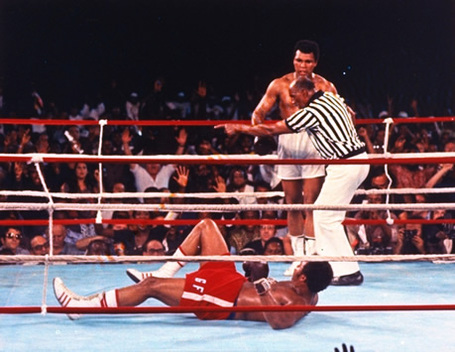 Going into the series, conventional wisdom had the Washington Capitals defeating the Montreal Canadiens in 4 easy games. The series was so one-sided that plenty of journalists trotted out the Capitals in 3 to hammer home the point of how lopsided this battle was going to be. Looking at the history of these teams showed this to be misguided. Last seasons destruction at the hands of the Bruins had set up my historical blinders and I got swept up as well into thinking the series was a foregone conclusion.

There were plenty of Canadiens fans that felt the Capitals were the perfect opponent because their weaknesses coincided with the Canadiens strengths. After watching the bi-polar nature of the team through 82 games, plenty thought there remained a chance for an upset, but assumed that they would not be able to sustain a concentrated effort for 7 games and that ultimately the Capitals would overwhelm them offensively. The majority of us were wrong.

In hindsight, if anything, the history of the Canadiens franchise should have provided the insight that anything is possible in the playoffs. Since 1971 the Canadiens have repeatedly defied the odds and brought down the goliath's of playoff seasons past.

Now at first glance the Canadiens/Capitals matchup looked to be even more one sided than any of these previous upsets, but was it? If you take into account the bonus point and the Capitals benefitting from the worst division in hockey, the chasm wasn't as large as everybody believed. If you look into the Capitals long history of post season failure, it also would have pointed you in the direction of the Canadiens having a chance.

When the miracle scenario played itself out, the media as always looks in earnest to craft their hollywood story ignoring the realities as thought they were inconvenient distractions. So after 24 hours of listening to the media deify Jaroslov Halak for his work in the Canadiens/Capitals series, as well as bitter fans following this script and discrediting the Canadiens as a terrible team that got lucky because of their goaltender, I figured I would present a different perspective on the matter.

First, I don't want to take anything away from Jaroslav Halak because he was fantastic over the final 3 games, but outside of the second period of Game 6, throughout the series I found myself continually amazed when the shot totals were listed at the end of each period. Although the territorial play favoured the Capitals, I wasn't seeing an abundance of scoring opportunities. What I was observing was the Capitals refusing to pay the price and settling for rushes up the wing and firing from every conceivable angle. They offered up very little net presence and were being easily moved from the front of the net. The Canadiens defense were content to give up shots from the outside and funnel the forwards away from the slot. They were getting their sticks in the shooting lanes and collapsing in front of the net and blocking a massive amount of shots.

For me it was reminiscent of the way Ali attacked the impossible task of defeating George Foreman in 1974.

Entering his championship fight in Zaire, Ali was presented with stopping an unstoppable offensive juggernaut. The consensus was that Ali would have to use his movement and jab to keep Foreman from inflicting too much damage. Ali knew that he could not sustain that type of defensive pace for 15 rounds and that he did not own a strong enough offensive arsenal to keep Foreman honest. So he had to devise an alternative strategy to defeat Big George.

Ali settled on the ropes and picked off punches with his gloves, arms and torso. He trusted that he could keep Foreman away from a large amount of headshots and with a legendary chin was confident that any shots that did find their way through would be absorbed without taking a knockout. He only offered an offensive attack when presented with openings created by Foreman's onslaught. Ali continued to wrestle along the ropes and tire Foreman, as the fight progressed, more openings appeared. Straight rights to the face combined with his increasing fatigue left Foreman open to ultimately be knocked out.

After Game 4, the Canadiens followed the rope-a-dope defense to a T. They put up a shell around Halak and exposed the outside and had confidence that when their coverage broke down that Halak could repel the attack. When the Caps either took an offensive chance or made any mental errors, the Canadiens attacked with speed and were extremely opportunistic over the final 3 games scoring 8 goals on only 66 shots. Looking at statistics leads one to believe that this finish was a miracle, but was it really?

Lets not forget, earlier in the series when the Canadiens tried to go toe to toe with the Caps, Jaroslav Halak was left vulnerable as he gave up 8 goals on 30 shots. In some circles it was written that he had likely played his last game for the Canadiens.

Now he is the subject of the following commerical.

During the 8 goal onslaught the Capitals (excluding blocked shots) managed to fire 45 pucks at Halak in just over 50 minutes, 14 of which were shot within 20 feet of the net.

Of the 8 goals the Capitals scored 6 were fired from the slot and 6 were scored from the crease area (I included the Backstrom goal in which Knuble brushed Halak (more contact than the Game 7 interference call) because if Knuble does not go to the front of the net, it is an easy save). They also took over 30% of their shots from within 20 feet (shots+misses+goals). Out of these 8 goals, the only one that Halak can be legitimately blamed for was the Carlson shot that tied Game 2. The Capitals crashed the crease and were able to dominate for long stretches. 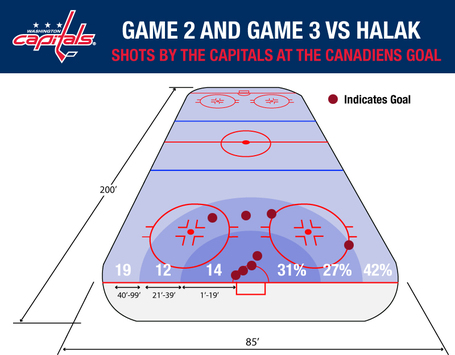 After falling behind 3 games to 1, Jacques Martin began to tinker with his distribution of minutes. Marc Andre Bergeron's minutes were cut to the point where he became essentially a power play specialist and after Hamrlik's back to back mental/physical gaffes in Games 3 and 4, his minutes were also cut. Hal Gill, Josh Gorges and Andrei Markov were handed a larger workload and with the Bulldogs on hiatus between playoff series, PK Subban did a strong job of bridging the remaining gap.

The Habs also played to Jaroslav Halak's strengths. Looking at his save percentages throughout the regular season, he was almost unbeatable from 20+ feet. During the 2010 regular season Halak faced 910 shots from outside 20 feet and only allowed 31 goals for a .966 SV%. 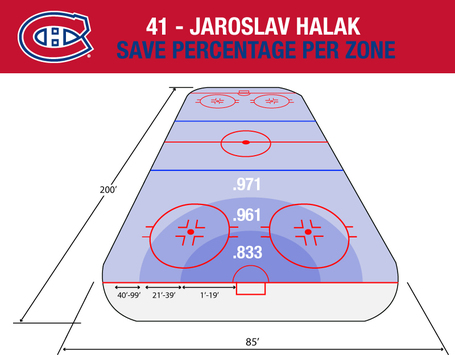 With these subtle adjustments, the Canadiens switched to the rope a dope strategy where they were content to allow the Capitals to gain the zone and protect the slot. The majority of the Canadiens 83 blocks took place in the slot and the Capitals became increasingly content to fire away from the perimeter.

Looking at the blocked shots by the Canadiens from Games 5 to 7 and the shot selection by the Caps over the final 3 games it is easier to understand how the Canadiens had success. Although 8% might not represent a massive difference, using Halak's save percentage over the course of the season saw the probability of scoring on each of those 14 shots decreased from 14% to 3%.The difference amounting to 2 goals instead of .5 of a goal, possibly altering the NHL timeline. All of the Capitals success over the last 3 games came from the lip of the crease, yet the skill players rarely ventured into this area.

Outside of Halak's outright robbery of Corvo in Game 6, the Capitals never sniffed the type of chances that Backstrom won Game 2 with, or Ovechkin decided Game 3 with. With Bergeron playing reduced minutes, the Canadiens did not suffer monster breakdowns on the cycle which lead to 3 goals in Montreal. With Hamrlik's offensive responsibilities decreased with the presence of Subban the Canadiens didn't suffer from soul sucking goals on shorthanded odd man rushes. The explanations are all there to see thanks to EOTP's exhaustive analysis of each goal in the series. 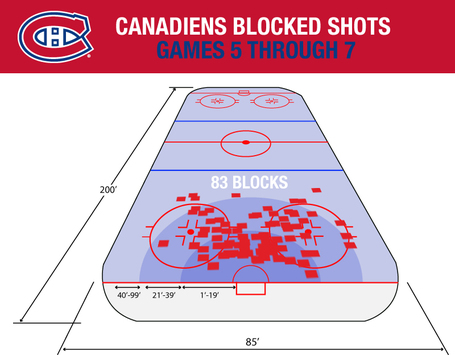 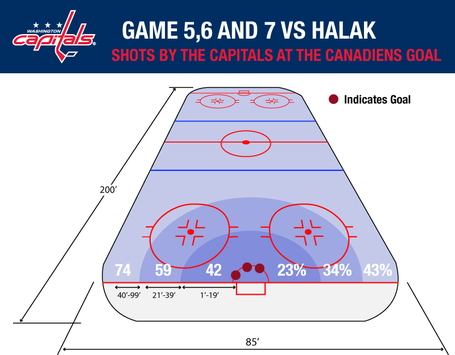 The Canadiens essentially took away the middle and dared the skill players to get their hands dirty, if they refused then they knew that their fate would rest in the hands of Fehr, Laich, Chimera etc. Nobody fell into this perimeter trap deeper than Alexander Ovechkin who fired 40 shots (shots+misses+blocks) over the last 3 games, but only TWO within 20 feet. Alexander Semin fired 47 shots at the goal but only FIVE were released within 20 feet. Backstrom fired only 13 shots at the goal with only TWO in the high traffic area. The majority of their 42 shots under 20 feet were registered by the likes of Eric Fehr, Brooks Laich, Mike Knuble, Jason Chimera, Matt Bradley and Boyd Gordon.The gamble paid off as the grinders could not get the job done

Like Ali, the Canadiens had shocked the NHL World. The Capitals were the dope and were provided with a life lesson on commitment and hard work, one that they will need to pay attention to if they ever want to sip from the Stanley Cup. The Canadiens exposed their arms, legs and torso to reckless punches while defending their head from any major contact and when they failed to provide the adequate support, Halak was there to absorb the blow. They jumped on their openings to slice up the Capitals defense finally landing the knockout punch late in Game 7.

The biggest issue with the rope-a-dope defense is that the longer you expose your body the more punishment it will absorb, the more punishment you absorb their remains the likelihood that your head will be exposed. It worked for the Canadiens because the Capitals were the perfect opponent for this counter attacking strategy. It will not work against the Pens who are more committed to the defensive end, possess greater goaltending and have a monster size advantage up the middle.

This series will be painted with the same broad strokes as Ken Dryden in 1971, Steve Penney in 1984, Patrick Roy in 1986 and Jose Theodore in 2002, but it should also be remembered for Jacques Martin out coaching Bruce Boudreau, the uncompromising dedication to the team dynamic by the Canadiens and possibly Ovechkin's Edmonton Oiler moment when he realizes what he needs to do to ascend the complete player he needs to become.