Habs At Large, Halak Responsible For Larceny In Philly

Share All sharing options for: Habs At Large, Halak Responsible For Larceny In Philly 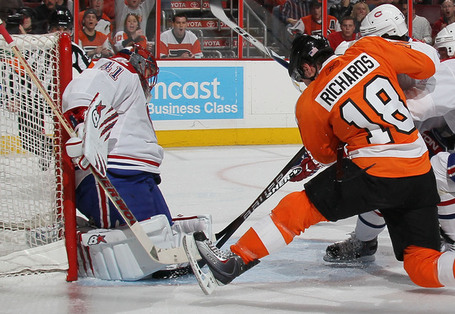 So in tribute, this game summary promises to be as inept and random, because I simply cannot wrap my head around what I've just seen. Be forewarned, the paragraphs in this post don't exatly lead to the next one with any type of flow.

I mean the Habs have just won in Philly, by shutout no less, and I cannot recall being this baffled, so dazed and confused about a win in eons. I can't even begin to know where to begin, so I'll just jump right in.

It was hard to watch two teams deserving to lose for 40 minutes. The Flyers, who received better goaltending than Habs fans might have expected, turned it in hard and heavy in the final twenty, but this was hardly spectacle.

Judging by the play, the Philly ice must have been in brutal shape. Passes that weren't hip high seemed to die in mid-sweep, halfway to their destination. The bounces were odd and far too many. A puck was even seen to reverse direction completely along the boards in the Flyers end in the first period.

Not having been at rink level of course, it's hard to do anything more than guess if that is what helped cause the total lack of cohesion among players. It was a mess and a painful watch.

The Canadiens themselves, were a disorganized bunch. Everything they did, they did in disarray it seemed. I don't know when Glen Metropolit, Sergei Kostitsyn and Jaroslav Spacek turned into Lemaire, Shutt and Savard, but it seemed their absences threw the team right out of whack.

I don't know what has gotten into Andrei Markov lately, but man has he become capable of some brutal decisions of late. It's almost a given that if the opponent has a breakaway, you'll find Markov caught up on an ill advised pinch.

Hard to say who played well for Montreal, as most of them vanished after 40 minutes. I found that early on, at least Maxim Lapierre and Ryan O'Byrne understood that the game was in Philadelphia. Mathieu Darche had moments, as did Tomas Plekanec, Andrei Kostitsyn on the latter's goal, and Brian Gionta of whom the bad ice buggered with most. 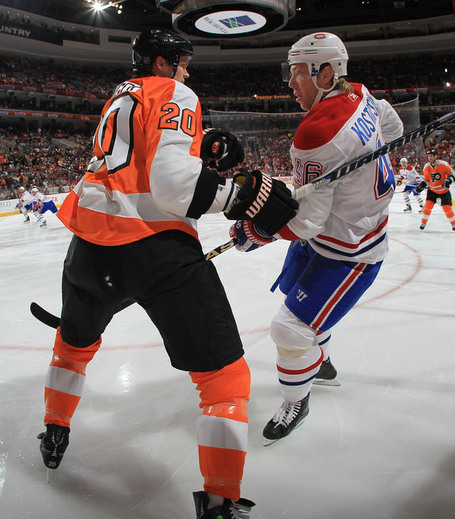 I've mentioned how bad the passes were, the choices were worse. Players were wide open in pass lanes big enough to drive a truck through, yet the feeds went to covered options. We all know it is important to keep heads up in Philly, but how many fanned shots and passes did you count? I lost count at about twenty.

Against a Flyers defense that has occasional lapses into dough soft, the Canadiens were hardly net crashers. With a tenuous Boucher tending goal and looking quite nervous at times, the Habs game plan should have been to keep him increasingly occupied. But on Team Perimeter, that's an unexplored concept it seems.

Have you the feeling that there is something not too smooth jiving between Markov and Bergeron? I mean, they go together like water and oil. They play as if to purposely not recognize the others talents, and they make every power play they participate in together an exercise in defiance. The key to employing Bergeron on the unit, is to get him open for a point blast, best fed by a precision passer. Now Markov is that reputable feeder, who once had the knack of finding Kovalev through a forest of skates and sticks, but for the life of him is unable to see Bergeron, open at the blue line, stick anxiously pulled back and at the ready.

Now I understand what Bergeron brings, but that said, I don't like him a whole lot. He's a minefiled on defense, he'll either blast, blow up or implode. Teaming him with Markov on the PP is an experiment that is not working. Everyone deplored Bergeron's absense while he was injured, but since he's returned nothing much has changed for the better.

Given all this, it's beyond me, coach Martin then decides to pair them in even strength shifts! 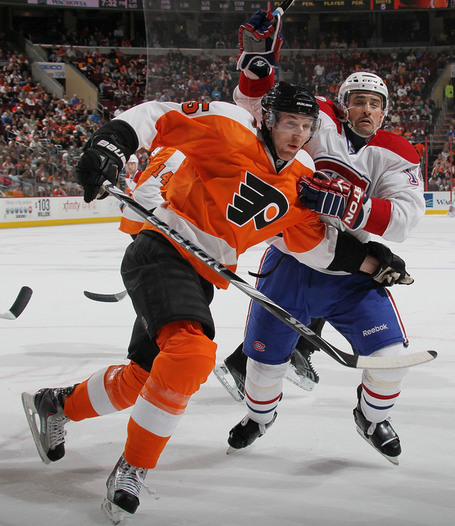 If there is any hope one can take from a game like this, and I purposely saved this to end with, is that Jaroslav Halak somehow continues to find a way to steal wins. Last night was absolute larceny.

The Canadiens are sixth in the Northeast at present. Inconceivably, there are only five teams in the division better than the Canadiens. If that thought doesn't make your noggin rattle, consider how much Halak has had to with that, in winning games wherein the Habs were desperately outplayed. He's a big,big reason we Habs fans aren't dreaming of Taylor Hall, and you can hold that against him if you will.

Now the hope, not all that unrealistic, is that if Halak is the playoff starter, can he steal one of two games on the road to start a series, and bring it back to the Bell tied at a game apiece?