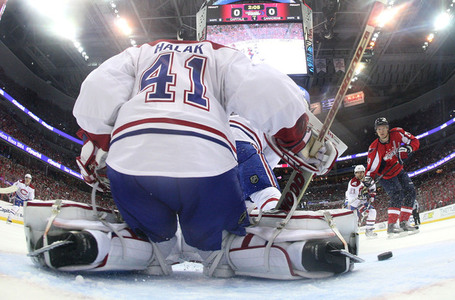 It's an incredible story with multiple plot twists, undercurrents, disbelief and a cast of unlikely heroes.

The Canadiens, on goals by Marc-Andre Bergeron and Dominic Moore, hung on in the dying seconds to upset the President Trophy winning Capitals.

It marks the first time an eighth seed manages to come from a 3-1 series deficit to defeat the league's top club.

The story's beginning goes back seven seasons, when at the World Junior under 18 tournament, a pair of Canadiens scouts watched in amazement as Slovakian goaltender Jaroslav Halak repeatedly shut the door of Russian snipers Alex Ovechkin and Evgeny Malkin.

The impressed scouts took note, and chose Halak in the ninth round of the 2003 draft, and the rest is history. Halak gradually climbed every rung in front of him.

Steeped in adverisity, and often controversy, since joining the Canadiens, Halak likely did not know how every challenge faced enable him to forge the mental fortitude that helped him rise to the top in the series against Washington.

Fast foward to the present tense, he's the puck dented hero of a giant slaying series, and THE goaltending story this far in the 2010 playoffs.

Although Halak was stellar, he had help from a cast of heroes, sung and unsung, who acted as a rempart around him for the final three games against the Capitals. Several transformed Canadiens players used the series to shine, and as it looks now, many of Bob Gainey's off season moves, designed to make the club a better and more resourceful playoff team, are looking quite genial.

Scott Gomez, acquired just before the summer draft in a trade that received an almost unanimous thumbs down, displayed some heady playoff skills, leadership and guts against the Capitals. Often going head to head against NIckas Backstrom and the Ovechkin line, Gomez sacrifced and gave every ounce.

Arriving with Gomez was an unknown quantity named Tom Pyatt, who made the team out of camp, surprising everyone with his speed and savvy. Pyatt developed into an ace penalty killer, and his Game Six work during a Capitals 5 on 3 was his moment of reckoning.

Brian Gionta and Mike Cammalleri were signed on for their leadership and offensive capabilities, and while both are small in stature, they are proving to be huge in heart. Enough cannot be said of either.

On the back end, groans could be heard upon the signing of Hal Gill, a lanky tower of a rearguard, who truly needed a season of viewing to be appreciated. Gill does nothing pretty, but he's the poster boy for trench playing playoff grit.

At the trade deadline, Gainey's replacement Pierre Gauthier didn't seek out a firebomb, he simply solidified the depth on his team by picking up Dominic Moore, a responsible two way center with a decent average on faceoffs. Moore cost a second rounder, which was seen as a high price paid. He contributed the series clinching goal.

It wasn't just Gainey's off season shopping that propped up the team, adversity in many forms became its friend. Injuries to key players, right out of the starting gate, kept the team challenged and tasked all season long. Unbeknownst, a refreshed Andrei markov and Cammalleri came in quite handy in round one.