Share All sharing options for: Capitals and Canadiens - Game Six Goals Broken Down 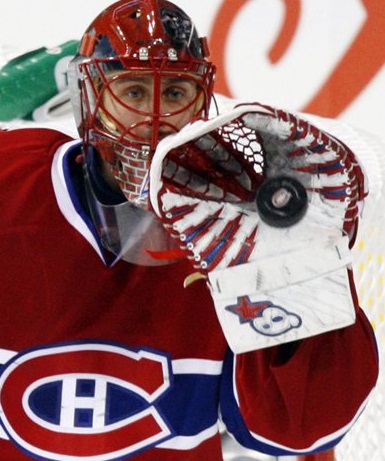 In a Game Six largely stolen via the prowess of Jaroslav Halak, it is a bit perverse to be analyzing goals by the Canadiens

It is also quite an irony, when breaking down how Montreal tallied their markers in this one, to see just how minimal the Capital's errors were in the loss. Apart from a subpar performance by Varlamov, Washington perhaps played their strongest game to date.

Shot totals may at times mislead, but they rarely lie. It must be terribly frustrating for the Capitals, who can only approach the next game with the exact same mindset.

Note: There are no graphs, vids or analysis for the empty net goals scored in the game. They are simply listed.

The Canadiens are on the powerplay and Varlamov intercepts a dump-in behind his net, and rather than leave the puck for his defense, clears forehand and it is stopped by Mike Cammalleri at the half board. Cammalleri passes to Marc - Andre Bergeron at the point, and his shot hits Belanger's stick and dribbles to Cammalleri, who fires a wrister from 35 feet out to beat Varlamov.

Speed and pressure by Tomas Plekanec on Varlamov behind his net caused the goalie to choose the wrong feed off. Cammalleri was first to the puck, and had little trouble feeding it past Belanger to Bergeron. Cammalleri just happened to be perfectly positioned when the redirect off Belanger's stick found him. He hesitated just a second, seemingly waiting out a screen by Andrei Kostitsyn in front, with Plekanec off to the side.

Varlamov was credited with the giveaway that lead to the goal, and he evidently did not see both Poti and Carslon safely at his back. The fact that both D-men were off to one side likely suggests why Plekanec raced in uninhibited from the opposite side. With the Washington PK box not set up square, Cammalleri was not rushed or compromised in any way by Belanger at the side board. 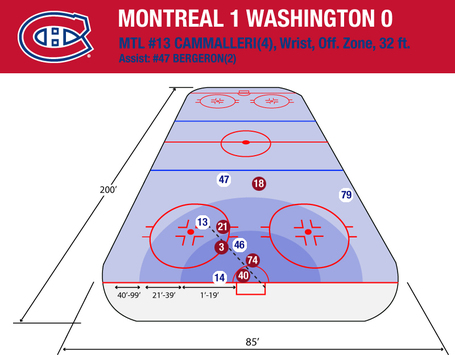 Off the faceoff, Plekenac draws the puck back to P. K. Subban, who makes a nifty little backhand feed to Cammalleri, who one-times a 60 foot slapper past Varlamov.

Perfectly executes what looks to be a set play, with Cammalleri dropping back nearer to the blue line. Subban's discreet little feed seemed to have caught more than a few Caps off guard.

Other than Varlamov getting a bad read on the shot, the Caps didn't have much time on this one to do much wrong. With Cammalleri crossing over after the won faceoff, and eluding any possible check, there really wasn't a whole lot more Washington could do on this gol, other than stop the puck. 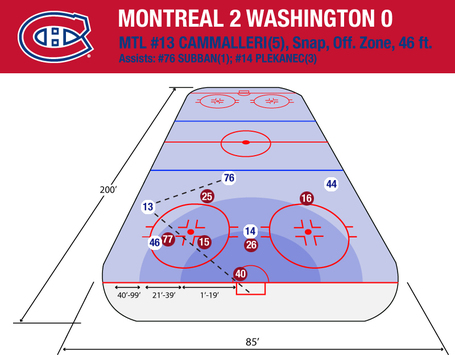 Taking the puck from the Canadiens zone, Gorges throws a simple clear out that is picked up by Lapierre, who skates in and blasts a 50 foot shot past Varlamov.

Gorges' clear was not even a pass, but more of a safe out in to the neutral zone. Lapierre, given the space by a Capitals line change, has able to pounce vigourously on it. All Moore, ahead on the play, needed to do was stay onside and play foil to Lapierre's options.

Gorges' feed seemed to catch Corvo quite flatfooted at the Canadiens blueline. Though he did manage to get back into play quickly enough, that brief lapse combined with Ovechkin coming off dishearteningly slow on the line change, enabled to mid ice gap that opened space and created the two-on-one.

* Listed as off the ice at the time goal was scored. 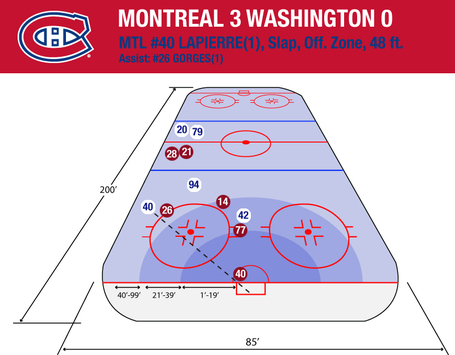 With five minutes left on the clock, Chimera flees O'Byrne's check behind the net and feeds a pass through the slot traffic to Green at the opposite point.

Chimera hit the back of the net with speed on the puck, and that chose O'Byrne's reaction by its very nature. His pass to Green was either spot on, or good fortune, but there was enough Washington presence in front of the Habs net to create what lead to the goal. Green's threaded feed through the mass to Fehr is why he is on the Norris ballot.

With numbered presence in front of the Canadien's goal, O'Byrne could easily have stayed with Chimera and fended him off. That O'Byrne chose not to stray at this time of the game is likely the safest option and the smartest move.

It's impossible to assess whether Chimera's feed to Green was a perfectly threaded pass or if it simply missed its intended target in the slot. Regardless, by sending it against the current, the pass caught all five Habs on the ice (including four left handed players) looking the other way. This facet played perfectly into the redirect by Fehr at the right side of the net, as no Canadiens sticks we in the lane to the tap in. 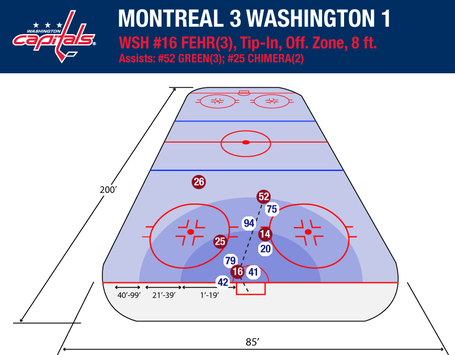 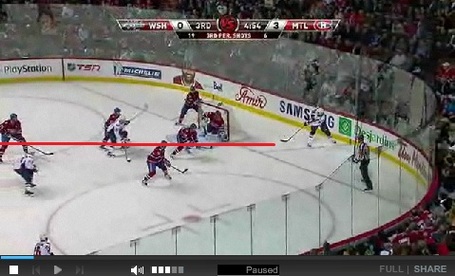 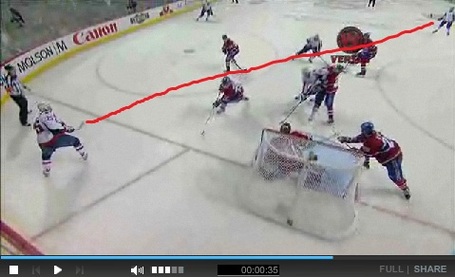 The three Montreal goals were gimmies, unforced errors on Washington's part. On each, the Canadiens did amazingly little right in order to score. They simply took advantage of what Washington offered.

A turnover on a shoot-in, a goal off a won faceoff, a third scored gratuitously from a bad Capitals line change and an empty netter. Not a lot of sweat and sustained effort went into either or all of the Canadiens. In this one, the hardest work was done in their end.

It's safe to say, the Canadiens goals will undoubtably come with more difficulty in Game Seven.