Share All sharing options for: P.K. Subban Called Up To Face Capitals 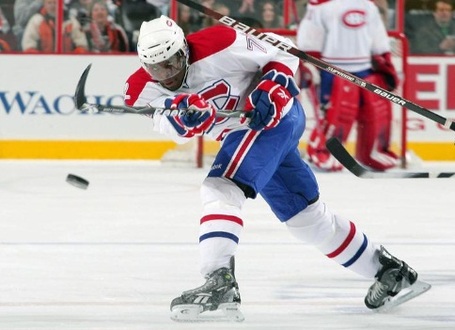 In a time of desperate need, the Montreal Canadiens have called up their top prospect to help them stave off elimination against the Washington Capitals this evening.

Standout defenseman P.K. Subban, fresh off helping the Hamilton Bulldogs to six game win over the Manitoba Moose, arrived in Montreal this morning and practice with the club.

Talk about throwing tons of pressure on the 20 year old - not that he cannot handle it. Subban is a two - time World Junior Gold medalist and last season appeared in the OHL final with the Belleville Bulls.

"He's played in World Juniors gold-medal games and he's played well, risen to the occasion," Canadiens defenseman Josh Gorges said. "With his attitude, demeanor and personality, these pressure-packed situations just run right off of him. With the game being at home it gives us an opportunity to control the changes and control who is out there in what situations," Gorges said. "He's a guy that can handle his own. His skating ability makes him able to recover better than most."

While Subban is used to big games, where he usually thrives, it might be a tad premature to assume he'll be the difference maker in a do or die game. Talent, sheer guts and desire will never lack in Subban, but approaching game time, it is unclear how much ice time he will see. 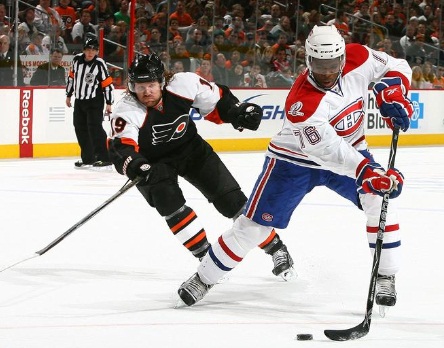 The Canadiens have not announced who will sit among defensemen, but speculation is that Jaroslav Spacek is still suffering from the effects of a flu virus. If both Subban and Spacek are to play, talk is that either of Marc-Andre Bergeron, Roman Hamrlik or Ryan O'Byrne could sit out. It is unlikely the Canadiens will dress eight rearguards, but coach Jacques Martin did a solid job shortening the bench in Game Five, giving all of Andrei Markov, Josh Gorges and Hal Gill close to twenty-seven minutes work.

Subban made his NHL debut back on Friday February 12 against the Flyers in the first game of a home and away set. The Canadiens lost the first one 3-2, but Subban was quite impressive in his debut.

Subban assisted on a third period marker by Glen Metropolit to record his first NHL point.

His game line stats were solid: twenty-two shifts, 18:04 of ice time, including 2:56 on the power play and 0:56 on the penalty kill, three shots on goal, two misses and one blocked, one hit, and a +1 rating. Minutes after his assists he was called off for tripping.

In the second game, he saw 22:08 of icetime, including 5:31 with the man advantage and set up a powerplay goal by Scott Gomez.

Note: NHL.com is saying Spacek is out for the game.