Share All sharing options for: Capitals and Canadiens - Game Five Goals Broken Down 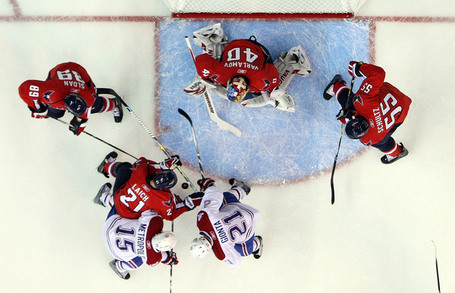 At the top of the post for the goals scored against the Canadiens in Game Four, I mentioned that they seemed to be a "curious composite of errors" of goals we'd seen scored against them in the series until that point. In Game Five of the series, Montreal cut out those costly errors to a great extent by managing the minutes played by the mistakes biggest perpetrators and extending the time on ice for those most successful in containing the Capital's most potent threats.

Other than distributing ice time to the more deserving players, the Canadiens also matched lines much better due to restricted shifts for four or five players. In doing so, the Canadiens "limited" the Capitals to 38 shots, with most coming from perimeter angles and less chances being in danger zones.

These articles are about breaking down how the goals are scored, but in going over highlights after this particluar game, I find it unfortunate that I cannot give equal treatment to the efforts given to preventing goals by the Canadiens.

There isn't much to go through from Game Five as only three goals were scored. To beef up this piece a little, you'll notice a screen shot from a pivotal point in each goal scored. The ''frozen moment" is something that I will add whenever scoring is low in the future.

Goal description: Plekanec intercepts a blind pass from Knuble to Ovechkin and passes it to Cammalleri along the boards, Cammalleri backhands a clearing pass that Markov catches with his glove. He picks an open seam from the Canadiens zone to the Washington blueline. Entering, Markov plays it safe, waiting for a pass option to present itself. He hits Cammalleri perfectly, just as Knuble stops moving his feet. Cammalleri, with Plekanec acting as a doorstep foil, fires low to Varlamov's blocker side.

Plekenec quickly broke up the play in Montreal territory and flicked a pass to an alert an streaking Markov. The Canadiens defenseman allowed his options to set up rather than dump off. Having outmanned the Capitals on the rush, all three Canadiens forwards took different avenues in rushing the slot.

Knuble's blind pass turned the puck over. With Ovechkin out of the play, Knuble hesitated between covering Markov at the blueline or taking the streaking Cammalleri. 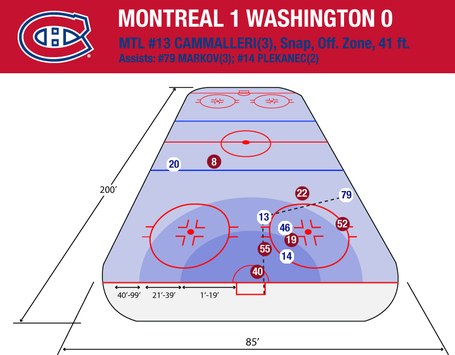 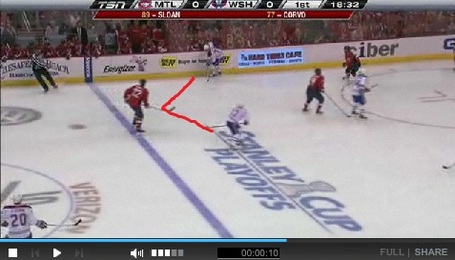 As Ovechkin, Backstrom and Knuble to a lesser extent, took turns being spectators to the play, Moen, Gionta, Gomez and Gill all worked a cycle behind the Capitals net, never allowing Washington possession. Outworking two Capitals defenders, the line hung on until the Moen option in the slot presented itself. Left totally alone, Moen lifted a backhander past Varlamov.

The Canadiens line made a mess of Sloan and Corvo, winning every battle and moving the puck at will. Gionta made an excellent read, spotting Moen and hitting him with a perfect backhand pass from behind the net.

Coverage broke down at more than one pivotal point. Sloan and Corvo were handed too much workload, as there was no support from the Washington forwards, especially Ovechkin. 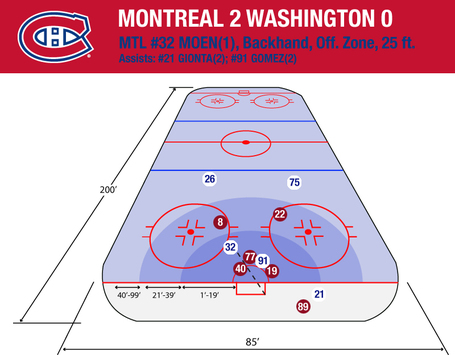 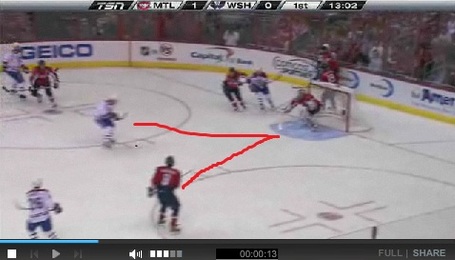 Ovechkin wins a puck battle with Hamrlik and feeds Carlson at the opposite point. Carlson fires wide, purposely, for Ovechkin to retain possession. The play is reworked a second time, and Carlson this time puts the shot on goal. The rebound creates a scrum. As Knubles takes the first poke at it. Ovechkin trails and picks up the loose puck and cashes it.

With Ovechkin no match for Hamrlik in the right corner, the Capitals had time to work the same exact play twice and make a line change (Backstrom). On the second execution, the Capitals profited from weak Montreal positioning to crowd the crease and outman the Canadiens for the gol.

Porous coverage all around by Montreal's fourth line against the Capital's top line. At the start, Hamrlik barely hinders Ovechkin. Sergei K and Metropolit do as little, never inhibiting the cross ice feeds to Carlson, both times. The breakdown is so evident, the Capitals even managed to make a player switch with the puck never being compromised. Hamrlik fudges on Ovechkin a second time, allowing him to easily take control of the puck off the back board. In succession, Metropolit missed blocking Carlson's shot, Cammalleri took on Backstrom who had just skated onto the ice, O'Byrne was outmuscled by Knuble on the rebound, and Sergei was augered to ice along the board, and never challenged or inhibited Ovechkin in any way. After the Carlson shot on net, both Hamrlik and O'Byrne are concentrated on Knuble and the puck in the crease, leaving Ovechkin to sneak in from behind. 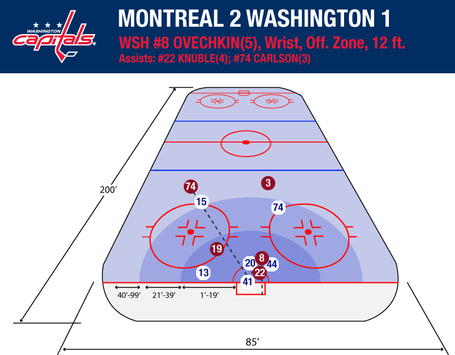 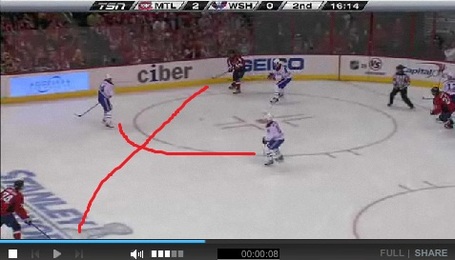 As the series progresses, we see in this game at least, a cutting down of errors and scoring chances. On each of the three goals from this game, a player failed to move into a position in which he could affect the goal being scored.

On the first, Knuble coasted upon hitting the Canadiens blue line, which turned out to the worst possible moment, because one more forceful stride and he would have cut off the pass to Cammalleri. On Moen's goal, Ovechkin was guilty of sightseeing, his thoughts and positioning more attuned to the play going the other way. Ovechkin's goal should be particularly embarrassing to the Canadiens on the ice, and Washington were allowed a complete do-over of a planned play. On it, Sergei Kostitsyn contented himself with too much coverage of Poti on the left point and was not positioned to inhibit the cross ice lane. In hindsight, perhaps Metropolit and Sergei are not the ideal players to have on against the Ovechkin and Backstrom duo.

The Canadiens have now played close to eight very solid periods out of nine in Washington. It is somewhat maddening that the Canadiens can contain Washington in their own rink but cannot find the same effort in Montreal. It is also frustrating to note that the Canadiens one undisciplined period in D.C. from Game Two stills hangs in the balance. Had the Canadiens somehow survived it, they would have the 3-2 lead in the series.