Share All sharing options for: Capitals and Canadiens - Game Four Goals Broken Down 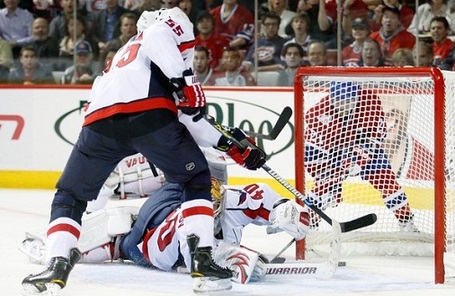 Game Four of the Capitals and Canadiens series is a curious composite of errors in terms of all games played in the round up until now. Hockey is a game of forced and unforced errors. In this particular one, the Canadiens have once again dominated for a period, held a lead nearing the final twenty minutes of the game, and come unglued at the worst possible time.

Washington, by all acounts, have the propensity and the personal to pounce on each and every Canadiens mistake, making the tide turnings swift and deadly for Montreal.

The more it is seen, the more it looks that the Capitals have picked up on where the Canadiens are beaten. Conversely, Montreal have picked apart Washington for lengthy game stetches, but little of that evidence shows up here.

The Capitals have made victims of specific Canadiens players repeatedly in the series, and what were at first glance mere unfortunate plays have now become glaring habitual errors.

Note: There are no graphs, vids or analysis for the empty net goals scored in the game. They are simply listed.

The Capitals are on the powerplay. Green fetches the puck behind his net with only Gomez forechecking. Three Canadiens are spread across the blueline, backing in as three Capitals are set to gain the zone. Green, with Ovechkin at his side, has passed up to Backstrom. Gomez is playing the middle, unconcerned about Ovechkin, the trailer on the play. Soon as Backstrom enters Montreal territory he slides a pass to the open Ovechkin at his right. Ovechkin takes two strides on fires, using Gill as a screen, beating Price to the blocker side.

Took complete advantage of Montreal's set up and used the open space to create the simplest of possible plays.

Did not pressure Washington in any manner whatsoever and let the unfolding play come at them. Gomez, the center on the unit, had all three Caps forwards and Ovechkin behind him as they hit the blueline. Gionta, by lying back, failed to support Gomez. 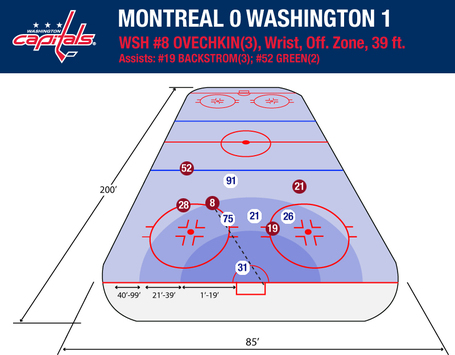 Canadiens (Cammalleri) win a rare faceoff in the Washington and the puck goes to Hamrlik at the blue line. Hamrlik passes to Sergei Kostitsyn, but the puck bypasses him and heades for Metropolit, uncovered behind the Capital's goal. Metropolit sees an opening, and tries to curl around the net and squeeze a backhander by Varlamov. Schultz pushes Metropolit from the play, but Cammalleri pounces on a dribbling rebound and bounces it over Varlamov.

With four Capitals players in the vicinity to ward off an untouched Cammalleri and Metropolit, Green, then Shultz, both blow a chance at clogging the latter behind the net. Metropolit is allowed to buy a second or two and choose his option. Despite outnumbering Cammalleri, the Caps fail to tie him up.

Taking the play himself, Metropolit drew Schultz away from Cammalleri, who was busy eluding Capital defenders. With Sergei arriving at the opposite side as the goal was scored, the Canadiens did well to clog the Washington crease. Prior, off the faceoff, Hamrlik chose either a safe pass or corner dump to position Montreal advantageously. 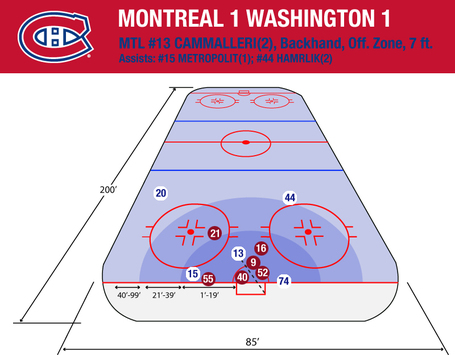 The Canadiens are on the power play, and Gomez wins the faceoff. His draw goes to Pouliot who shuffles it off to Gionta at the side board. He drops to Markov and heads for the net while the defenseman passes it across to Bergeron for a look. With no shot option, the puck is passed back to Markov, who drills one off the back board right of Varlamov. The rebound comes straight to Gionta, who has spun and found himself with puck at his feet and a gap between Varlamov and the post.

Won the faceoff and quickly controlled and moved the puck, never once letting Washington get a bead on it. Markov wisely detected the space that enable the set play off the boards.

Knuble blew coverage on Markov, pivoting right towards the slot rather than remaining focused at the point. 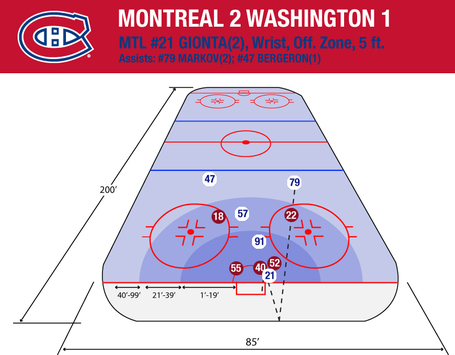 The Canadiens are on the power play in the dying seconds of the second period. In an initial attempt up ice not seen in this clip, a missed Bergeron feed to Hamrlik, who played it lazily at the left boards, has broken the flow of the rush. The errant pass has caused the Canadiens to scramble, and the puck ends up in Washington territory without possession. Hamrlik, then playing the opposite side on the blueline, makes a late dash in keeping the puck in their zone, and fires a shot on net that hits a Capital's defender. Washington dumps the puck out, and Hamrlik makes a second attempt at keeping it in. The puck and Boyd Gordon get behind him, and Gordon breaks in with Knuble as they capitalize on a picture perfect two on one.

Played a positionally sound penalty kill and took advntage of Montreal not playing to the clock. Gordon got behind Hamrlik with ease, and Knuble charged the net with only Bergeron back.

More succinctly, what Hamrlik did wrong. Three of his own errors are all over this goal. First, on the Bergeron pass, Harmlik stopped skating, instead reaching his stick forth for the puck rather than increasing his speed. A few seconds later, he fired on goal, directly at a Capitals defenseman instead of simply playing the puck into the corner. As if to atone for turning the puck over twice, he makes a vain attempt to keep the puck in once more, failing to recognize that Gordon had gotten behind him. watch the zoom in on Hamrlik - even the cameraman apparently knew he'd fudged it. 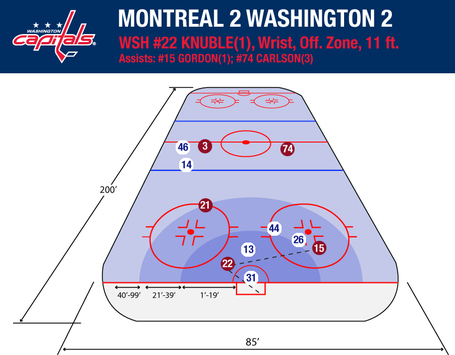 The play begins in the Washington end when a Gomez shot on misses the net ten feet north of the crease. The puck rolls to the right boards, where Gionta is pasted by Sloan in his attempt to gain it. Gomez, not assessing the suicide feed, positions himself behind the Capital's net and hesitates before countering the forming Washington rush. Still, Gomez manages to reach Semin, the puck carrier, and chases him from blue line to blue line, never shouldering him off the puck. With three Canadiens concentrated on Semin, he slips a pass across to a streaking Ovechkin, who turns Gill into a lamp post, before beating Price.

Gained the puck by being physical in their zone. Semin carried well and waited for the right pass option to materialize.

Terrible puck support in the Washington end, off a broken play. Gomez skated in stride with Semin instead of muscling him off the puck in the neutral zone. Gill played the puck instead of the man on Ovechkin. 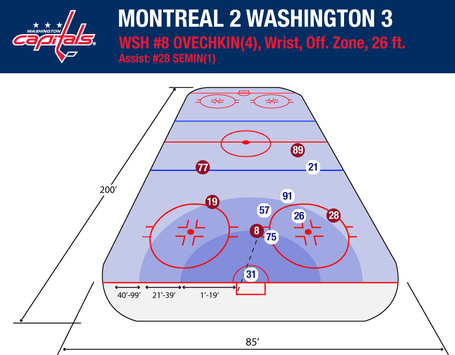 Chimera intercepts a blind Bergeron clear behind the Canadiens net and feeds off to Bradley, who skates it back behind the net unharmed, circles and shoots. His backhander goes cross crease to Chimera, who fires it in the open side.

Intercepted the puck by overtaking the unalert Hamrlik, who Chimera runs a block on to enable Bradley to pass by. Bradley smartly attacked the opposite unprotected side of the net, freezing the coverage and enabling Chimera to go undetected.

Multiple errors. Moore chose to pass off to Bergeron rather than advisedly shooting up the boards. Bergeron, with Bradley baring down, panicked and never assessed whether Hamrlik was a safe option. Hamrlik played Chimera softly, not laying it on until the puck was passed off. Hamrlik then plays Chimera, and not puck carrier Bradley. Bergeron meanwhile, becomes a great spectator of it all at the front of Price while Moore tries to head off Bradley, neglecting Chimera, who walks in behind him. Neither of the three Canadiens are in place to counter Bradley at the opposite side, and get caught with the puck going the other way. 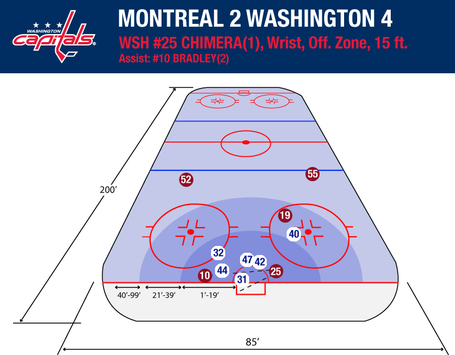 Moore, on an individual play, takes the puck end to end, breezes by a faked out Corvo and backhands one high over Varlamov.

Moore took full advantage of the space, time and lasping coverage given him. Moen ran a handy block for Moore just outside the Washington blue line.

With the score 5-2, the Capitals were caught completely off guard by the Moore rush. Corvo seemed to play the pass option to Sergei at the blueline, and allowed Moore to gain the needed step to get by. 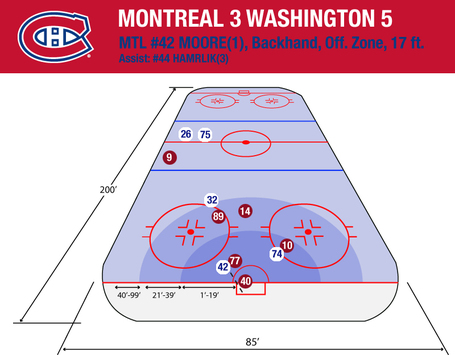 When this series began, one underlying story was the Alexander Ovechkin versus Andrei Markov matchup. Over the years, Ovechkin has not fared well with Markov on the ice against him and he has admiited as much.

Curiously, of the 17 goals scored by Washington, not into an empty net, Ovechkin and his center Nicklas Backstrom have scored eight of those. A ninth goal involved both players setting up John Carlson. Of those nine goals, Markov has not been on the ice for a single one.

Adding all this up, it is fair to assume that the series is being won by Washington thus far due to their ability to get Ovechkin and Backstrom away from Markov.