Share All sharing options for: Capitals and Canadiens - Game Three Goals Broken Down

Game Three of the Capitals / Canadiens series has provided the first one sided score of the round. In analyzing the six goals scored in the game in individual takes below, I purposely avoided the game context, in which Montreal took ownership of the first period on home ice, and seemed to lose all grip after the first score by the Capitals.

"Purposely" I state, because the errors of each goal scored against Montreal in this game should be taken on their own.

It wasn't pretty, but the Capitals may have done the Canadiens a favor in the long haul, by exposing certain glaring weaknesses on the team. After you read these individual goal breakdowns, you will see that it is quite apparent what the Canadiens need to address, not only in this series, but going forward into the future.

Reading through it, you may feel as I did, in that you are privy to an autopsy before the corpse has even reached the morgue.

Once more, I cannot emphasize enough that on many of these goals, you should pause the clips as often as possible to take stock of the positioning of players during errors.

I may eventually perform such a task for readers, via a sort of clip photo scan / telestrator marker notes in pinpointing details of mistakes, but it involves a vaste amount of time and effort to nail it right.

The Canadiens are on the powerplay and the puck is turned over at the Montreal blueline. Boyd Gordon, with Mike Knuble to his left, bare down on Jaroslav Spacek, who's left to himself. Gordon carries deep, his pass attempt cut by a backwards sprawling Spacek. Gordon has only a shot option, which he makes just as Spacek has slid into Halak, pushing him into his goal. While Mike Cammalleri somewhat successfully chases down Knuble, he fails to take him completely out of the crease area. Knuble gets one whack at the rebound. By this time, Hamrlik, who was caught up ice, re-enters the picture, but coasts from the top of the faceoff circle to the crease, not a forceful stride taken. In that lapse, Gordon procures a second rebound, and shuffles it past Halak.

After creating the turnover, Gordon and Knuble turned on the jets, spreading with options open and backing Spacek in. Both never quit on the play at the net until the puck was in.

Spacek's slide into Halak was unfortunate, but ice is more slippery one minute into the period than it is minutes later. The two most costly mistakes were Hamrlik's - first in getting caught up ice, and then in gingerly skating back on the play, allowing Gordon all the time he needed, and all the attempts as well, to score the goal. Seeing how quickly Cammalleri blazed by Hamrlik on the play, emphasizes the point that a defenseman with no wheels left might not be the best options on the second powerplay unit. The best player for that job in my opinion (Sergei Kostitsyn) sat in the pressbox. 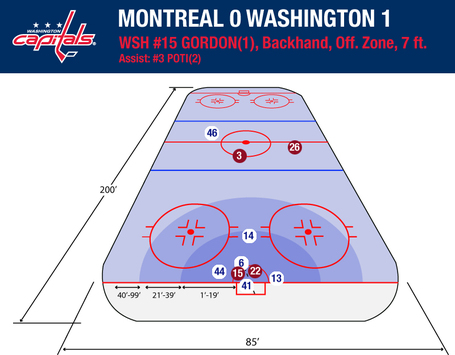 A faceoff in Montreal's zone and the Canadiens fourth line is out against the Capital's third, in theory, although Laich and Fehr have been Hab killers all season. After Washington win the faceoff, a shot on goal is fired. Washington battles and wins puck control as four Montreal players seemingly have the three Capitals in check around the Canadiens' goal. Laich is allowed to take the puck behind the Canadiens net left, skate towards the right corner and pass off to Green at the point. Green, with all kinds of time and space, feeds the puck back to Laich, who's moved into the faceoff circle. He waits for a screen to set up with Fehr in front of Halak and fires a low drive that the gaolie never sees.

They maintained possession off the faceoff, never allowing Montreal a sniff at the puck. They moved it well to between options that the Canadiens allowed and set up an effective screen in front of Halak.

Bergeron misses an opportunity to get the puck in the corner, then does little to hamper Laich's effort behind the net. That enables Laich to skate from behind Halak towards the right corner unimpaired. Markov arrives to late to do much about Laich just as Pyatt is slow getting to Green, arriving once the puck is passed off. Bergeron chases Laich up the boards leaving only Metropolit in the slot to deal with Fehr and Morrison. 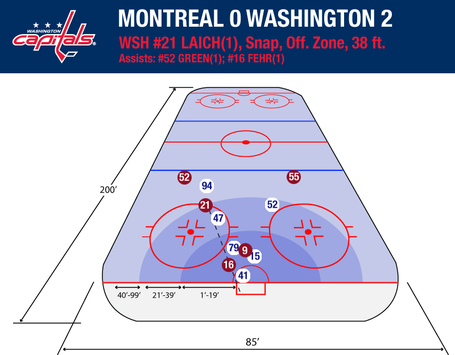 The play begins in the Washington end after a shot off Varlamov's mask. The rebound is fanned on by Kostitsyn and picked up by Laich, who passes to Fehr. The players criss-cross at the Canadiens blueline, and Fehr beats Bergeron easily one on one. The loose puck is picked up by Morrison, who immediately passes back to a streaking and uncovered Laich. Laich riffles a shot on net, and Fehr, unimpeded by Bergeron, skates through the crease and burries the rebound.

Fairly simply, Bergeron played the puck on the one on one with Laich and was easily beaten. Markov reacted late to Fehr, allowing him to get behind and go straight to the net.

From the neutral zone in, made short passes with little risk. Laich crossed over so he'd have Bergeron to beat and not Markov. Morrison and Laich engaged in a second criss-cross to further foul up Bergeron. Fehr, without the puck, smartly headed for the net. 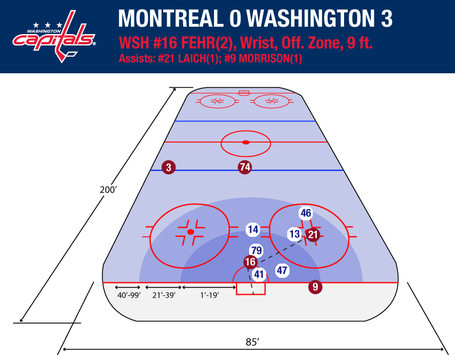 Gorges turns over the puck in the neutral zone and Ovechkin pounces on it like an uncaged lion. He bursts in over the Montreal blueline, where he is bodied by Gorges and loses the puck. Knuble is on it first at the right boards, and passes behind the net to Backstrom. Ovechkin has continued into the slot, with Gorges backing off him, and he is spotted quickly by Backstrom for a one-timed shot past Price.

Four Montreal players are back on the play against three Capitals, yet Plekanec is beaten to the loose puck by Knuble, Gill is late in reacting to Backstrom, and Gorges takes his focus off Ovechkin momentarily. Each lapse combines enough blown space and time coverage to enable the three Washington forwards to set up and do what they do best.

The key move was made by Backstrom in finding a quick safe haven behind the goal. It gave Knuble a no risk pass option and had everyone looking the opposite way, while Ovechkin strolled in for the kill. 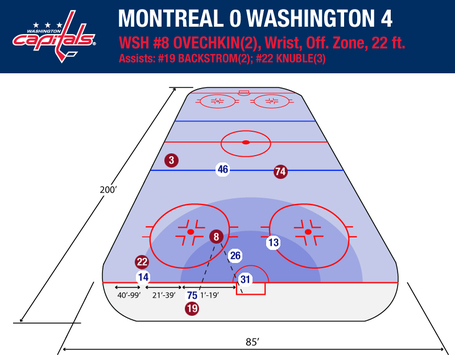 Hamrlik carries into the Washington zone, passing off to Cammalleri at the rights boards. Cammalleri hits a streaking Plekanec, who has crept in behind the Capital's defenders. Plekanec fires a shot on goal, and picks up his own rebound for the score.

Hard to say, as every Capitals player became a pylon on the play. Montreal simply took advantage of Washington starting the period unfocused. Boudreau smartly called a timeout immediately after.

Allowed Montreal to walk right in do what they wanted. 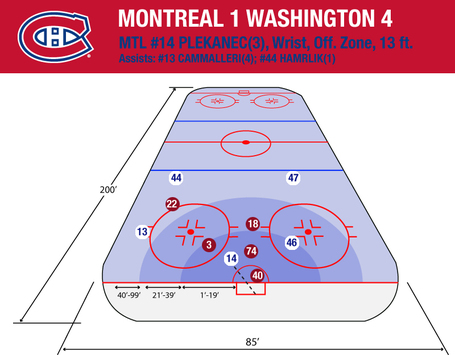 Price corrals a shoot-in behind his net, and passes right to Bergeron, who hurriedly feeds it to a covered Plekanec. Bradley intercepts and fires on goal. Price saves, and Bergeron feeds the rebound up the middle a second time, and the backhander bounces off Plekanec to Bradley, who takes a few whacks at it before putting it in.

Price had the time and option to feed the puck to Spacek rather than Bergeron, but of course, hindsight is 20/20, Bergeron boobed twice - not opting for the safety of a boards clear, then choosing to clear into a middle inhabited by Caps players the second time. The result was inevitable.

Like the Canadiens lone goal, this marker was a gift wrapped by Bergeron's errs. The Capitals didn't need to do a whole lot correctly to earn this one. 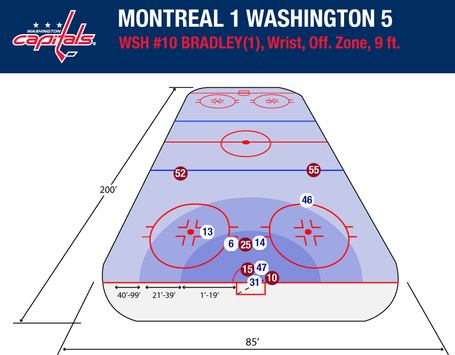 Winning is a team effort, and so is losing. A pair of obvious goats (Hamrlik and MAB) played a larger part in this loss than others, but these clips do not tell the entire game story.

There were mistakes of every kind made in Game 3 by Montreal, but one thread of thought unollowed in my assessement of each goal scored, was that often, the Canadiens seemed to have the wrong personel on the ice to counter what Washington brought.

With the last line change, this is hard to comprehend unless one knows exactly what the Canadiens coaching staff were thinking.

Since I have not been able to figure that out all season long.....this is yours to chew on for now.