Halak Or Price In Game Four?

Share All sharing options for: Halak Or Price In Game Four?

The question on many minds this morning is an obvious one to a fair extent, for no better reason than finding something that will halt the Washington momentum in the series.

When it comes to playoff goaltending, there is the old adage that you dance with the one that brought you. That has been done.

Listening on CKAC this morning, a caller was making the case for Halak on those terms, suggesting that in the Canadiens' realm, Halak is our Brodeur, Miller or Luongo.

Note, those three goalies are coincidentally trailling their respective series' two games to one.

No offence directed at Yann Danis, Patrick Lalime or Andrew Raycroft, but they're not exactly Carey Price in terms of backup plans. 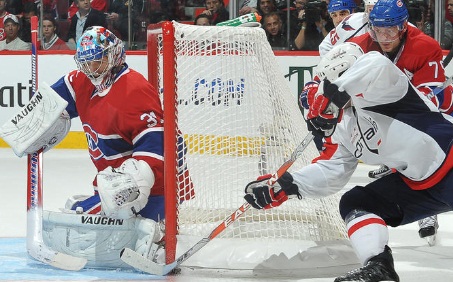 Price fared very well against the Capitals this regular season. No one needs to be reminded that he went 2-1-1 in those game,but it should be recalled that he worked the first two without Andrei Markov in front of him (a 3-2 win and a 4-3 SO loss), lost the thrid game 4-2, the won 6-5 in overtime, wherein the Habs lineup dressed about seven players who started the season in Hamilton.

All good on that end.

Unfortunately for Jaro, he seems rattled. His play in three games has gone from excellent to spotty, and his nervousness has been broadcast and shown continent wide thanks to one worrisome clip. Perhaps it is on Halak's mind, quite naturally, that this is his biggest shot with a new contract due this summer.

The bottom line might well be that the Habs have one last desperate chance to tie this series, and it will place itself in an electric chair heading back to Washington for Game 5 down three games to one.

Price's larger frame as the Capital's get more physical as the game's progress could be helpful. The fact that he has not played much down the stretch is concerning. The thirty minutes played last night may have shook cobwebs, but with Washington concentrating on not blowing their lead, it was from from the ultimate test.

The situation is, that for now it's all they have to go on.