Reality Sinks In For Habs In Game Three Loss

Share All sharing options for: Reality Sinks In For Habs In Game Three Loss

Reality sinks in, and what now looked like such a wonderful illusion last Thursday, has become another in a series of one night stands that has stuck around for a few, getting uglier by the day.

These three dates over the weekend were pretty much a microcosm for what the entire roller coaster relationship has been the past year.

One night, they put out and deliver. The next, you think they'll come through, but it's a big tease in the end. By night three, you discover that all along you were dealing with nothing but a flirt.

That's when it hits hard, starting as a slap in the face and moving south. There's a right to the chin, a punch in the gut, followed by a knee to the nuts.

Doubled over, reality sets it again, and you realize it has all come undone. The dream is over. It was nothing more than a dream all along. really.

Yeah I know, I don't know where this shit came from either, but this is what my relationship with my hockey team feels like this morning. After my reaction to Game 2, I decided on the reflective rather than the impulsive and this is all I got. Maybe I'll find some middle ground shortly, but for starters, this is all I got. 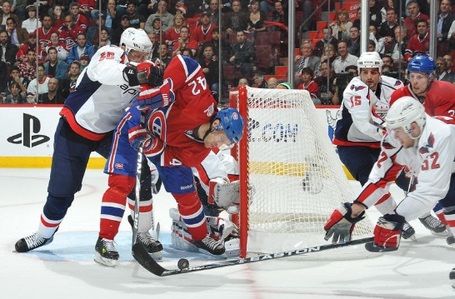 The Canadiens can play with the Washington Capitals, to a great extent.

In fact, when the Canadiens unload the offensive artiliary, they even manage to appear similar to Washington.

The more emotive Montreal get, like the Caps on occasion only, the more they expose the weaknesses of their back end, and their unit of five play.

Both teams have large holes, we'll say. Grave concerns that need addressing on a consistent basis.

So far, the difference has been that when the Canadiens come in for the kill, they cannot seem to finish. Montreal's first period last night, was their best of the series so far, in many ways. Yet, for all the unloaded artiliary, they could not find a way to score.

It's what has been a concern in many, many losses this season, and last night was no different. Killer instinct wanes at the worst possible times.

Thus far, that's the most apparent difference between the Canadiens and the Washington Capitalizers. 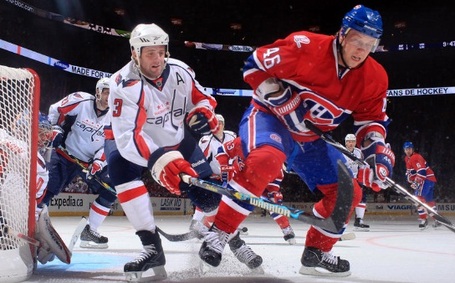 One could make the claim that the Habs can match the Capitals player for player, skill by position for skill by position, apart from Ovechkin and Backstrom, and our John Carlson, P.K., being in the AHL still.

I would tempt myself to build around such a claim, but honestly, last night the Capitals barely needed Ovechkin and Backstrom to win. While the Habs addred Glen Metropolit back to the lineup, it was Washingston's plumbers that did Montreal in.

It took the Canadiens a whole seven minutes to implode, and after Martin lost his composure more than we'd seen all this season, his rattled team followed suit. On the opposite bench, a calm Boudreau called a timeout with his team leading 4-1.

That's one more difference between the Canadiens and the Washington Capitalizers.

There, may lie the differences between the two teams. The Capitals have played their firewagon style for some time now, and recognize when it is about to loose a wheel. They can adjust in time.

For Montreal, playing along is difficult. They cannot make similar adjustment as it does not have a forged identity that allows them to recognize when things are coming undone. It's too late when they realize that something have gotten away and that something needs to be done.

They are sitting somewhere between that slap in the face, and that kick to the nuts!